Olive Films // G // February 19, 2013
List Price: $29.95 [Buy now and save at Amazon]
Review by Stuart Galbraith IV | posted February 28, 2013 | E-mail the Author
All's well that ends well, at least for the 1970 film version of William Shakespeare's Julius Caesar. Not a great success when it was new, this Panavision production had previously been released to DVD by Lions Gate/Artisan in 2004 and 2007, both times utilizing the same old, genuinely ugly and unpardonably panned-and-scanned video master. Olive Films, sub-licensing the film from current owner Paramount, has now released a gorgeous-looking Blu-ray that at last does this much-underrated film version justice. MGM's more famous 1953 film, starring Marlon Brando, James Mason, John Gielgud, and Louis Calhern as Marc Antony, Brutus, Cassius, and Julius Caesar respectively, is more highly regarded, but this is superior in every way save for Jason Robards's famously inadequate Brutus. In high-def and with director Stuart Burge and cinematographer Kenneth Higgins's widescreen compositions at long last restored, this Julius Caesar can be appreciated as the near-masterpiece it is. 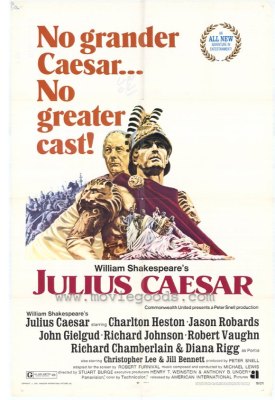 After defeating the sons of Pompey, Julius Caesar (John Gielgud) returns to Rome where his popularity is such that he is declared an all-powerful dictator in perpetuity. This doesn't sit well with Cassius (Richard Johnson) who, outraged and alarmed by Caesar deification, plots Caesar's assassination for the good of Rome. He enlists the aide of Caesar's close friend, the honorable Brutus (Robards), along with other senators including Casca (Robert Vaughn) and Cimber (Michael Gough).

Upon his return, Caesar is warned by a soothsayer (Alba) to "beware the Ides of March," and his wife, Calpurnia (Jill Bennett), is disturbed by a nightmare predicting his assassination. Despite this, Caesar is compelled to go to the Senate where he is brutally stabbed to death.* Chaos follows, with Brutus and Cassius pleading the morality of their plot before the Roman people, while Caesar's loyal right-hand man, Marc Antony (Charlton Heston) quietly builds his case against the conspirators, tenuously allying himself with Octavius (Richard Chamberlain) for control of the Roman Empire.

Beyond the poetry of Shakespeare's dialogue, much of the greatness of the play, carried over effectively into this film version, is the ambiguity of the two factions. Are they driven by a loyalty to Rome that is greater than their loyalty to their friend Caesar, or are they driven by envy and ambition? This film version certainly foreshadows the unraveling of the alliance between Antony and Octavius, and is impressive in how it contrasts the lofty aims, at least stated by Cassius and Brutus, with the upheaval and pandemonium their actions create.

Seeing the film in its proper aspect ratio helps enormously. Though primarily a television director, Burge uses the full width of the Panavision frame in blocking his actors, their movements and the mise-en-scene reflecting their emotions and ambitions throughout. One can also better appreciate the visual ambitions of this very modestly budgeted production. Virtually all the Rome exteriors are soundstage sets, some forced perspective, with painted cloth "skies." Even so, the main set is impressively huge and dozens of extras swarm about it. But I don't think the aim was to create a photorealistic environment - surely they knew they weren't fooling anybody - so the look seems more deliberately halfway between "movie real" and that of a theatrical performance. Oddly, in the second-half, when the action switches to real exteriors shot in Spain, visually Julius Caesar becomes less interesting, at times resembling a sword and sandal epic.

What people tend to remember about this Julius Caesar is, as Leonard Maltin calls it, Robards' "zombie-like" Brutus. Though inarguably one of the all-time great actors of the American stage (often excellent in movies, too), Robards was perhaps the definitive interpreter of Eugene O'Neill but has no sense at all for the language of Shakespeare. As Heston wrote in his The Actor's Life - Journals, 1956-1976, in Robards hands "it either comes out totally flat or totally verse," a fair assessment. Instead of an internally conflicted character torn by the demands of friendship and duty, Robards's Brutus is simply inexpressive and an ineffectual wimp, looking like a pouty old maid unhappy that no one's asked her to dance. "Good Brutus, can you see your face?"

Robards' scenes are compensated enormously by Richard Johnson's superb Cassius (played by Gielgud in the 1953 MGM version) and, briefly, Diana Rigg's Portia, though Robards compares badly next to their performances. Johnson all but carries the first third of the play, stating his case against Caesar plainly and compellingly, and later his bitterness at Brutus' miscalculations about Marc Antony is expertly realized. It's the best performance in the film. Diana Rigg makes the most of her one-scene appearance as Brutus's wife. (Burge's camera wisely stays on her, rarely cutting away to Robards' poker-faced reactions.) If only James Mason had reprised his role from the '53 film.

The rest of the cast is serviceable to excellent. Gielgud's Caesar is an interesting mix of styles: he reads the lines in an oratory manner common to his generation of RADA actors (Olivier, etc.) who came out of the 1920s and '30s, but simultaneously plays to the camera with the subtlety of a seasoned film actor. Heston's Marc Antony - his second of three films in that role - is appropriately played larger-than-life, characterizations in which he excelled. He's more than up to the challenge.

Chamberlain and Vaughn, primarily regarded as television actors at the time, come off quite well. Chamberlain makes his comparatively small role significant, while Vaughn is a wonderfully cautious and sardonic Casca. Well-known British character players pepper the cast. Christopher Lee's billing is sandwiched between Rigg's and Bennett's, but his role as Artemidorus consists of just five lines. Blink and you'll miss Andre Morell's Cicero (who has literally no lines at all), though Ron Pember (Dennis Timson on Rumpole of the Bailey) has a charming opening scene as the (Cockney-accented) cobbler.

Derived from its Commonwealth United, U.K. release, Julius Caesar might appear terribly grainy and somewhat drained of color to some, but to me it seems an accurate rendering of the original theatrical version. And though grainy, almost like Techniscope at times, the image is unquestionably very sharp throughout with no obvious DNR and the great depth of field for most of the movie adds to the effect. Halfway through there's an abrupt fade-out where an intermission was likely planned (right after "let slip the dogs of war"). And around the 1:20 mark there is a night-for-night scene introduced via a couple of super-grainy shots that almost disappear into a black hole, but overall I was quite impressed. The mono audio is more than adequate, though the lack of English subtitles is most unfortunate. There are no Extra Features.

Except for Jason Robards, this is a superb film of Shakespeare's eminently accessible tragedy, a film boasting at least a half-dozen great performances and twice as many very good ones, a film that's entertaining, even exciting, and always engrossing. A DVD Talk Collector Series title.

* Incredibly, the bloody stabbing and fleeting nudity notwithstanding, the picture still earned a "G" rating from the MPAA.