The supporting cast of Seinfeld have attempted to extend their respective careers post-show to varying degrees of entries and exits, but Julia Louis-Dreyfus appears to have been the one who has had the most success with it. The former Saturday Night Live cast member seemed to be the only one who could manage to keep a show afloat for more than one season with the CBS show The New Adventures of Old Christine. But with Veep, there is the very good chance she may have hit the mother lode.

The show was created by Armando Iannucci, whose Oscar-nominated film In The Loop seems to bear some resemblance to this series. Louis-Dreyfus plays Selina Meyer, the Vice President of the United States as she carries on with the day to day business of her role in the government, from back room negotiations to photo opportunities to a potential relationship, and everything in between. She is accompanied on these things with her Chief of Staff Amy Brookheimer (Anna Chlumsky, returning to work with Iannucci from In The Loop), her Communications Director Mike McLintock (Matt Walsh, Ted), the Deputy Communications Director Dan Egan (Reid Scott, Amusement) and Selina's personal aide Gary Walsh (Tony Hale, The Informant!). They try to juggle the various balls in the air, some of them fall, some of them just thrown against the wall sometimes. 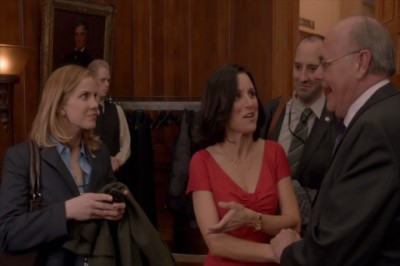 While listing the supporting cast may serve as a judgment to some about the merits of the above, I firmly think the nuances of some of those characters that help may the show what it is. For instance, Mike has been working with Selina forever, but has long since phoned in the job, to the point where he uses an imaginary dog as an out to avoid additional and potential time-consuming responsibility. He clashes with Dan, who has aspiration to take Mike's job. Dan's aspirations cannot be better illustrated than in the show's first episode, when quits the job he has with a Senator, and ends his relationship with said Senator's daughter, to take the higher visibility job with Selina's office. Gary helps Selina in virtually every way possible, before, during and after the day at the office. Along with these outstanding characters you have the Vice President's personal assistant Sue (Sufe Bradshaw, Star Trek) and Jonah (Timothy Simons), who is the Vice President's liaison to the President, shuffling back and forth from the Vice President's office to the Oval Office, and butting heads frequently with those in the latter.

The interplay between all of the characters is fascinating, and the moments they create for themselves are great to watch. Consider another moment in the first episode when Gary whispers to Selena about a personal detail on a congressman during a meeting, which she then immediately uses. To see the joy that Hale is able to emote about this usage, and the fact that he does this to NO ONE in particular is hilarious, and it's the moments of ownership the actors have for their characters is exhilarating. Jonah's an arrogant prick, and Simons owns this and plays it up extremely well, and the irony is that his character seems to have very little impact on the everyday work.

It is this lack of impact that is shared throughout the actors, and it makes for funny viewing. One could even say this trait may flirt with incompetency, but it is how comfortable or even self-aware that people are about it that is great. Hale seems to strangely wrap both arms around this myopia because that is the role he has every day. In an episode where Selina is really stressed, she asks Gary for "something," and he comes back with ice cream. She asks, slightly trembling, for whipped cream, which he dutifully fetches. It's all about the next task for him, sometimes he likes it, and occasionally he doesn't. Mike's barbs towards Dan and Jonah are great, and Walsh's delivery of same makes for moments of personal enjoyment, even as he is sweating through shirts in the middle of summer. Additionally, those staffers who seem competent, but ultimately fail in some situations that also makes for fun times. The most level-headed members of the staff (Amy and Dan) have their own brain farts, and seeing the office having to recover in lieu of them makes for their own spots of brilliant humor. Chlumsky and Scott deliver superbly in their performances. 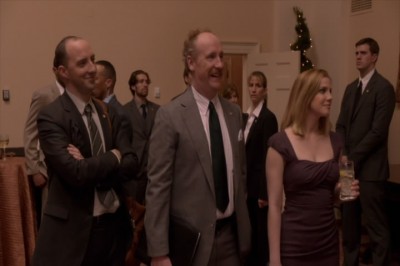 So what of Dreyfus as Selina? She is something to watch. She is not without her own moments of stupidity starting from the jump, but the times when she is berating the others for their own faults are just as fun to watch. She tends to have a bit of a maternal instinct for her staff, but she already knows that her job is (to beat a drum) one of little impact. She has an almost daily line when she asks Sue if the President calls. He never does, and sometimes she knows what the answer will be before it happens, which helps to reinforce that. She is thrown a substantial curve in her character development during the show which may prove interesting towards how she may deal with things going forward, and it is done with comedic elements thrown in for almost flawless execution.

All of this is fabulous stuff, and I have not even scratched the surface of how great the show is, particularly the cynicism and wit that Iannucci uses to skewer modern American politics, helps to potentially lift Veep into the list of HBO comedies that continue to impress and generate belly laughs beyond the limits of its half-hour installments. At the risk of tossing in a hackneyed political statement to a Blu-ray review, I'd hope the 22nd Amendment is forgiven for awhile so we can experience further adventures of Vice President Selina Meyer.


Eight episodes, spread over two discs, and all episodes are presented in 1.78:1 widescreen and use the AVC codec for their high definition presentation. I remember seeing most of the episodes during their broadcast run in 2012 and liked their look then, and on Blu-ray there would appear to be slightly more detail and facial poring that can be discerned while watching the show. Colors and flesh tones are reproduced accurately and without saturation problems, black levels are solid, and the image is free of distractions like DNR. It is nice to watch these again, that's for sure.


DTS-HD MA 5.1 surround for the show which turns out to have a surprise or two up its sleeve. This dialogue-driven comedy sounds clearly and is balanced nicely in the center channel, and when the show cuts to motorcades where Selina is riding in, the sirens and engines from the cars go by and pan from back to front and side to side if necessary, making for an immersive experience, and the stomach discomfort Selina endures is creepily noticeable to boot. The subwoofer stays sequestered throughout, but it is a comedy, so what do you want? It is good material to listen to for sure.


For this tiny show, HBO has put a lot of glitter on top of this present. No less than twelve(!) commentaries on the season's eight-episode run, with some form of the cast and crew involved with the tracks. The first four episodes have two tracks each; one group is made up of Dreyfus, Iannucci, executive producers Simon Blackwell, Christopher Godsick, Frank Rich and Dreyfus, the other is Chlumsky, Hale, Scott, Simons, Walsh and Bradshaw. The first group is more technically focused, sharing thoughts on the cycle an episode goes through from shooting to final product, and speculation on character back stories past the reach of the show, and Dreyfus shares her opinion on cursing without abandon. The parallels to real-life events are also touched upon as well, and spotting a guest star or two (Dreyfus' daughter is played by Kiefer Sutherland's daughter, in case you want to feel old). The second group is looser and funnier, talking about things like production recall and laughing at moments on the show. The episodes gradually get quieter and quieter with more watching, but the tracks themselves are fun.

The second disc includes four more commentaries, with Iannucci, Blackwell, Chlumsky, Walsh, Simons and Dreyfus. These are easily the 'giggliest' of the bunch, along with the usual pointing out of things that occur on screen, and occasional anecdotes about props no longer being available. After all these tracks it is clear that Chlumsky has a Julia Roberts laugh and it echoes through the tracks. All in all the tracks are entertaining and informative, certainly worth the time for fans. 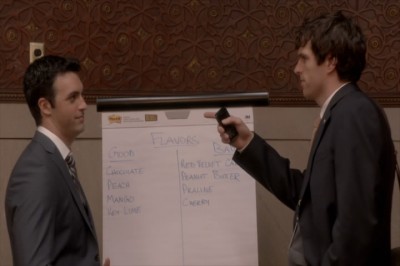 In addition to these, there is Selina's retraction to Governor Chung (1:17) and some outtakes to said retraction (1:28), and an anti-obesity PSA (:44) and outtakes to those (1:10), all of which in character. Deleted scenes for all of the episodes follow (24:52), a lot of which are quick and easy, but the longer ones are generally hilarious and worth looking at a second or third time. "The Making of Veep" (13:24) is your traditional HBO featurette discussing the show, it's inspiration, the actors and casting choices made, and it is not special. There is also a standard definition disc for the season (where the screen grabs originate) and a redeemable code for digital copies of the episodes (to be redeemed either in the iTunes store or via UltraViolet service) in a surprisingly nice package from HBO.


The first season of Veep not only appears to be another solid show in the CV of Julia Louis-Dreyfus, but it's comedy and the ensemble of actors do a tremendous job with what they have been given, to say nothing of the improvisation they bring to the table. Technically the disc is solid and a packaging/supplemental material perspective only boost its chances. At only eight episodes, it is easily must-watch television ahead of its upcoming second season.