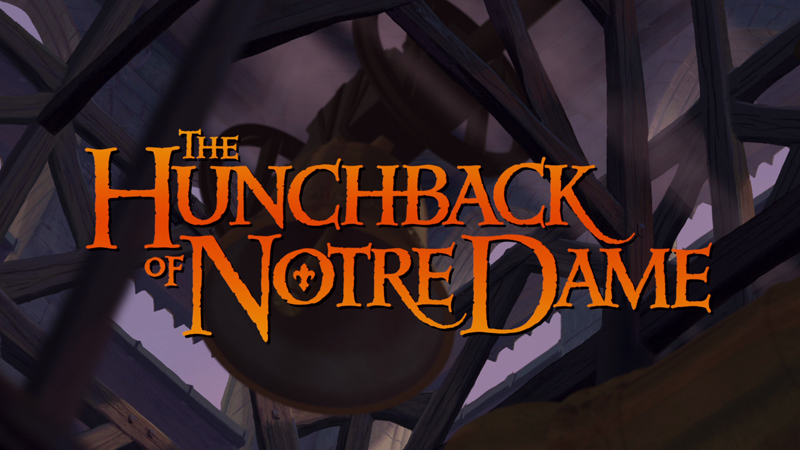 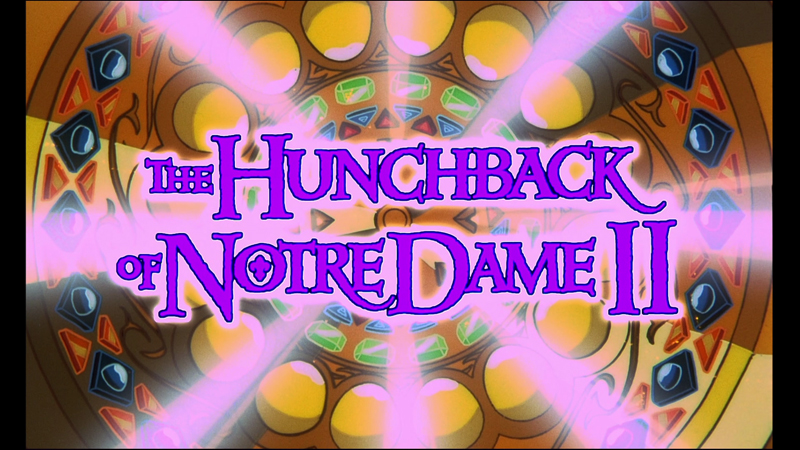 The Movie
Until only recently, The Hunchback of Notre Dame was a mostly unknown quantity to me. It came out at a time when I'd lost interest in Disney's somewhat by-the-book Broadway musicals masquerading as animated movies, and I never felt the need to revisit it, as it came during Pixar's rise to prominence as Hollywood's preeminent animation house. However, one Saturday morning, while watching TV with my daughter, we came across an airing of The Hunchback of Notre Dame, and I was hooked (though my little girl wandered off.) This dark cartoon was visually arresting and wonderfully creative. Obviously I had made a mistake, though it seems like Disney did as well, as they made a movie for adults and tried to sell it to kids. Fortunately for them, it stands the test of time.

Based on the novel by Victor Hugo, the story follows a deformed man named Quasimodo (Tom Hulce), who lives in the towers of Notre Dame, ringing the church's bells. Kept there by Frollo, a local leader who fills him with fear of the outside world, he watches out over Paris, wishing to be a part of that world. Then, one day, secretly joining in with the celebration of the Feast of Fools, he meets Esmerelda (Demi Moore) a beautiful gypsy woman, and his desire to leave the lonely safety of the church grows even more. Unfortunately, Frollo and his lieutenant, captain Phoebos (Kevin Kline), are on the lookout to catch both of them, for very different reasons, which will create some uncomfortable situations for all involved. 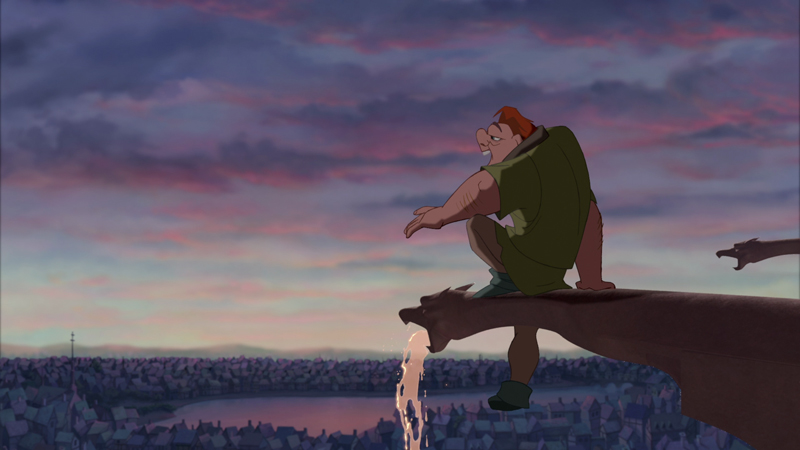 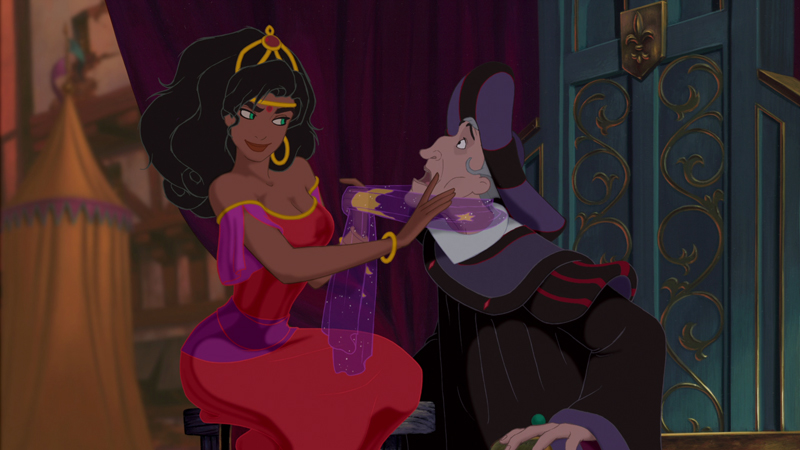 For the most part, this is yet another of Disney's musicals, the genre that nearly put the studio into a death spin. Alan Menken and Stephen Schwartz provide their usual raft of entertaining song and dance numbers, with The Bells of Notre Dame and Out There setting a perfect tone, but then along comes a song like A Guy Like You, sung by the gargoyles to Quasi, another boisterous fun-time song in the vein of Be Our Guest. While this is a bit out of character for the film, the movie does recover thanks to some exciting action sequences and some dramatic moments that keep the story moving foward rather well.

Part of that plot progression is what's most striking about this film, namely how dark and intense it is. Right from the start, as Quasimodo's origin is revealed, the film pulls no punches when diving into death and danger, and it has some very obvious religious themes, from Esmerelda singing a prayer to God on behalf of the outcasts to Frollo's hypocritical and downright creepy approach to sin, which includes an intriguing dancing flame that attempts to seduce him. Sensuality is also front and center, as Esmerelda is easily the most erotically-charged heroine Disney's come up with, to the degree where she actually performs a pole dance at one point. This is really not a fun film for the kiddies, no matter how many gargoyles (with a voice by Jason Alexander) they shove in for unneeded and inappropriate comedic relief. 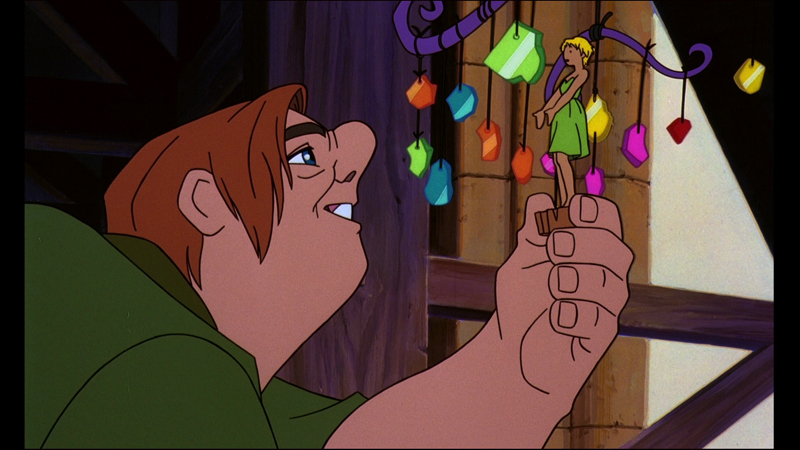 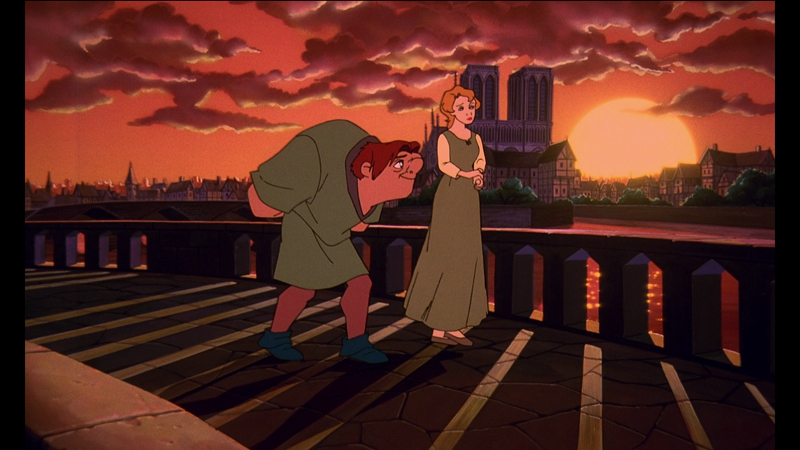 In the late '90s, mired in a theatrical losing streak, Disney decided to mine their catalog to make money with direct-to-video sequels to their top titles. Unfortunately, these films have been made on the cheap, and the results betrayed the effort, a truth seen clearly in The Hunchback of Notre Dame II.This brief (just 66 minutes) follow-up, which sees Quasimodo still happily ringing those bells and palling around with Esmerelda and Phoebos' son Zephyr, is pretty much wholly unnecessary, with a story that sees Quasi once again struggling with his unattractive looks. This time he's met a circus girl named Madeline (Jennifer Love Hewitt), who is shocked by his disfigurement. However she is forced to pursue him by the circus' leader Sarousch (Michael McKean) as part of a plan to steal Notre Dame's most beautiful bell. Naturally, this leads to some problems for our sensitive hero.

Impressively, pretty much the entire core cast returned for this film, a rarity for a direct-to-video sequel, but perhaps the short run-time was enough of a draw to get the stars back behind the microphone, especially since Moore and Klein have limited parts in this one. It's really about Quasi and Madeline, with a kid character (voiced by Haley Joel Osment) and some of those gargoyles thrown in to appeal to younger viewers. It would be hard to make this movie less of an artistic endeavor or more of a calculated business enterprise. From the simple, low-level animation (which looks even worse here in close proximity to the first movie) to the story, which somehow stretches what might have once been a 12-minute segment of the Smurfs to over an hour, the whole thing has the awful feel of a cash grab. Just consider it an extended extra on the original film's Blu-Ray, as no one's likely to feel good about paying to get the second movie. 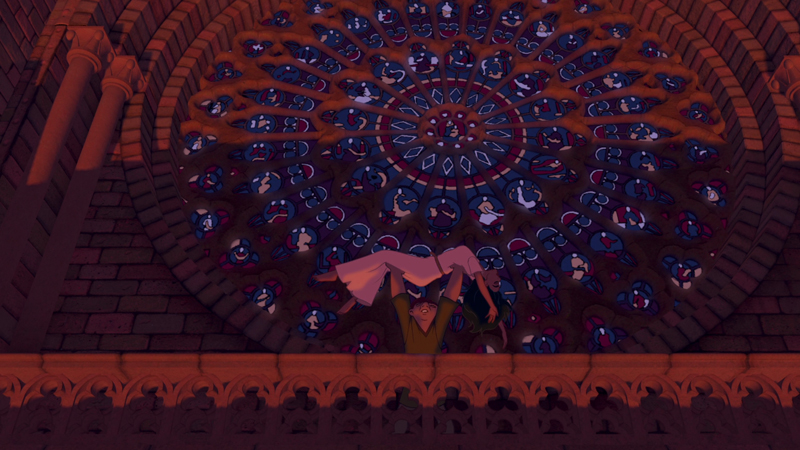 The Discs
The two Hunchback movies arrive in a three-disc set, two DVDs (one for each film) and a Blu-Ray (with both films), which are packed in a standard-width, dual-hubbed Blu-Ray keepcase with a foil-embossed slipcover. (Note that that is three discs in a dual-hubbed case, so the two DVDs are stacked on one hub, which seems to be a trend with Disney releases.) The Blu-ray features a static menu offering options to watch the film, select scenes, adjust languages and check out the extras, which are clearly marked as "Classic DVD Extras" (a decision that deserves a thumbs up.) Audio options include English DTS-HD Master Audio 5.1 and Dolby Digital 2.0, and Spanish and French Dolby Digital 5.1 tracks (as well as Portuguese and Russian Dolby Digital 2.0 tracks not listed on the box), while subtles are available in English SDH, French, Spanish, Portuguese and Russian (the last two of which are also not listed.)

Regarding those DVD copies, though the discs say 2013 on them, they are straight re-pressings of the original discs, complete with full-frame trailers indicating movies "coming soon to video and DVD" in 2002.

The Quality
Both films are presented with 1080p AVC-encoded transfers that are technically solid, but the difference between the two couldn't be more stark thanks to the source material. Whereas the first Hunchback's gorgeous colors and lush detail get a proper delivery that's pretty much free of any noticeable distractions, the same sharp presentation makes all the weaknesses of the second film shine like a needle in your eye. The harsh colors and limited animation (reminiscent of Saturday morning cartoons from the '80s) are basically the opposite of what the first film offers (which, as a direct-to-video film isn't surprising, but still...) The only downside to the front film's clarity is the integration of the 3D animation isn't as smooth as it was in standard definition. The clarity's effect is worse on the second movie, as you'll notice dirt and damage that might otherwise be less in-your-face.

The Hunchback of Notre Dame and its unfortunate sequel arrive with DTS-HD Master Audio 5.1 tracks that somewhat mirror what each film brings in terms of the visuals. The original's sound is powerful and agile, to a fault, as sometimes there's so much happening aurally that song lyrics get a bit buried. Other than that, it's a terrific experience, offering up strong music and impressive effects in the surrounds that really make for an enveloping film. The only thing that didn't stand out was any dynamic mixing, largely because when the film really gets moving, there's stuff happening all over the place and it's hard to separate elements out. Part Deux, on the other hand, is a fairly simple presentation, offering a solid across-the-board presentation, but nothing that stands out as anything exemplary. There's all the usual suspects, including clear dialogue, some surround effects and strong music, but nothing about it will stick in your memory when all is said and done.

The Extras
The classic DVD extras for the first Hunchback are surprisingly impressive, but still a disappointment considering the treatment Disney's given most of its other films. Ignoring that, you should enjoy the limited extras. Up first is a feature-length audio commentary with producer Don Hahn and directors Kirk Wise and Gary Trousdale. This is exactly the kind of track an animation fan would want, as the trio goes into great detail on the production and reveals plenty of secrets from the movie. Did you know Belle is in this movie? After listening to this track, you'll know exactly where she appears and plenty of other hidden references, which, with the clarity of Blu-Ray, you'll be able to enjoy fully.

The other big extra is the 1996 "The Making of The Hunchback of Notre Dame" a 28-minute look behind the scenes, hosted by Alexander. It's a slightly fluffy, sometimes cheesy promo for the film, but it provides plenty of info on the production of the film and the people behind the art and voices. What makes it so interesting is how it offers a look at Disney's early work in CGI, and Disney's at-the-time new animation studio, and how the set-up wasn't too far off Pixar's acclaimed production style. The Blu-Ray extras wrap with a multi-language reel of the song "A Guy Like You," presented in a variety of foreign languages. These tend to be interesting, as you get to hear characters in different languages.

The sequel brings with it two short featurettes (in standard definition,) starting with the 2002 Disney Channel promo "Behind the Scenes with Jennifer Love Hewitt" (4:46,) focusing on the actress' role in the film, her character and the song she sings for the film. Almost half the piece is made up of her song though,played over clips from the film and footage of Hewitt in the recording booth. At least it's a decent pop ballad. It's followed by "A Gargoyle's Life: It's Not Easy Being a Gargoyle" (2:42), an odd bit of beat poetry by Alexander as Hugo, with video cobbled together from art for the two films. It's hard to figure out just who this was meant to entertain.

For Hunchback II, the Festival of Fun Activity was left off of the Blu-Ray, but is available on the included DVD. This set-top game includes a bell-ringing game where you give Quasimodo a series of notes to play, and a dance game where you assign a set of dance moves for Djali the goat to perform. For a little kid, these could be pretty fun to play with. 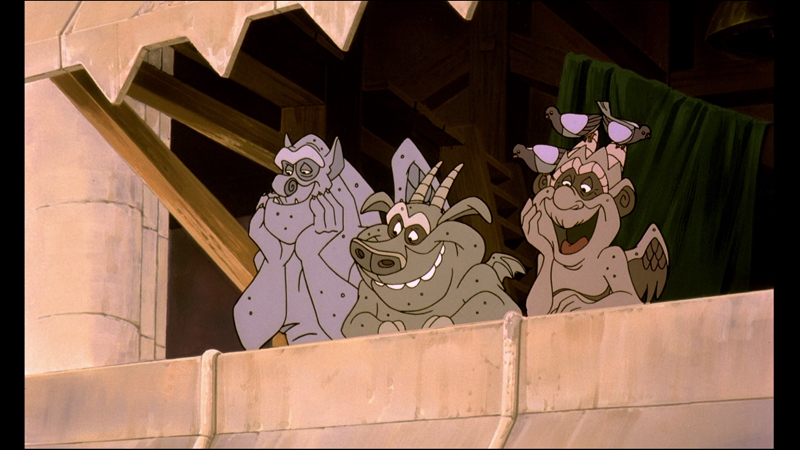 The Bottom Line
Possibly the least kid-friendly animated Disney film of the modern era, The Hunchback of Notre Dame gets shoved in the corner more often than not, but it's a gorgeous, entertaining flick that deserves more respect than it gets. The Hunchback of Notre Dame II is also a movie. This set offers them both in excellent quality, with most of the original extras, and the entire package in standard-definition for good measure. Don't pick it up expecting little ones to enjoy it, but mature viewers will find a whole lot to like in a movie they may have overlooked before.