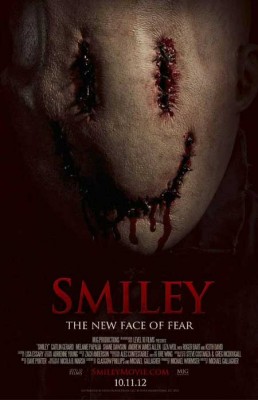 I hate to throw a horror film that actually tries under the bus, but Smiley never shakes its designation as an ambitious failure. College freshman Ashley (Caitlin Gerard) comes to campus with raw emotions after the death of her mother, and bunks with laidback hipster Proxy (Melanie Papalia). The girls learn about Internet urban legend Smiley, who comes to kill unsuspecting online chatters after one party types "I did it for the lulz" three times. The movie grumbles along at a glacial pace before pulling the rug out from under the audience with an ending that is both ridiculous and strangely affecting. The resolution alone, which provides unexpected commentary on Internet behavior, almost makes Smiley worth watching, but the ending cannot redeem the preceding 80 minutes of boredom.

For a film with much to say about Internet culture, Smiley is curiously out of touch. The script, which was co-written by Director Michael Gallagher and Glasgow Phillips, treats the Internet like a great digital unknown where coeds come to chat with strangers daily. Ashley and Proxy first encounter Smiley at a party via a Chatroulette-esque program, and a friend shows them a video of someone getting killed that he swears is an elaborate hoax. Internet hacker Zane (Andrew James Allen) and outcast Binder (Shane Dawson) argue about the video's legitimacy, but Ashley is immediately freaked out. What does she do next? Ashley decides to test the Smiley legend with Proxy, and types "I did it for the lulz" three times into a video-chat window. The grotesque Smiley, with stitched-up eyes and mouth, promptly pops up and kills the man in their chat window.

Much of Smiley concerns Ashley's personal demons, and the body count is limited. Ashley sees a psychiatrist to determine if she is going crazy, and begins having vivid dreams of the Internet killer. The film throws in some intellectual hooey during several extended scenes of Ashley's ethics class, where her professor (Roger Bart) drones on about Occam's razor and roller coaster logic. Smiley really wants to be a weighty thriller, but is too pedestrian to be effective. The thrills are mostly absent, as the kills come in tiny chat windows, and the novelty is gone after the first attack. The opening 80 minutes feel like an unending reel of Ashley going to parties, freaking out, waking up, and going to class. Although it runs a tidy 95 minutes, Smiley feels twice as long.

Once the slowly winding road to the ending is travelled, Smiley shows sparks of energy. The finale isn't totally unexpected, but it's surprisingly cruel. Parts of it don't make sense - the film never sets rules for its antagonist - and Ashley's situation is revealed to be far out of her control. A part of me admires what Gallagher did here, and the film should at least make you think twice about the information you make public on the Internet. Gerard plays wounded and scared well, and I suspect she'll find better parts down the road. Smiley is ambitious but ultimately dull, and flaws in pacing and logic derail this train long before it reaches the station.

The 1.85:1 anamorphic widescreen image is serviceable, with decent detail and texture. Colors are well saturated and skin tones are natural. Black crush is limited, and detail is retained in darker scenes. There are some compression artifacts, and a few shots have a soft appearance.

The 5.1 Dolby Digital soundtrack is also good, with clear dialogue and adequate separation between effects and score. The subwoofer is called in on occasion to provide low-end support, and the surround speakers are used for ambient and action effects. English SDH subtitles are available.

The Audio Commentary from Director Michael Gallagher and actors Shane Dawson and Roger Bart is low key and chatty, and Gallagher reveals how he made the most of the film's tiny budget. There's also some Gory Outtakes (2:17), a Gag Reel (2:27) and the film's trailer (1:06).

Smiley is a by-the-numbers slasher with an interesting ending. This low-budget thriller from Director Michael Gallagher assumes college freshmen have nothing better to do than video chat online. Timid student Ashley hears about Internet urban legend Smiley, who kills people on a Chatroulette-esque program when one participant types "I did it for the lulz" three times. When Ashley decides to investigate the story, her life becomes a shambles. The premise promises eye-rolling, B-movie fun, but the execution is surprisingly boring. The film concludes on a high note, but the previous 80 minutes have already ruined the mood. Skip It.