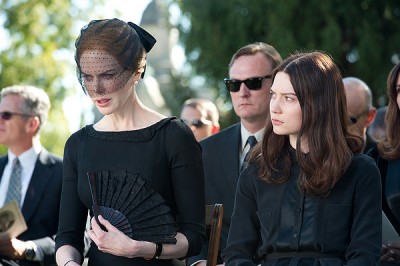 Stoker is the creepy and weird new film by Oldboy director Park Chan-wook. It's a paranoid horror thriller, a la old-school Polanski, but with a striking visual style that brings to mind both Tom Ford's exquisite A Single Man and Joe Wright's audacious adaptation of Anna Karenina. Alas, Stoker is not as good as either of those films--or, for that matter, either Rosemary's Baby or Repulsion. Even so, Stoker is definitely unique, a bizarre and appropriately disturbing horror film that succeeds in getting under the skin.

Mia Wasikowska (Jane Eyre, Lawless) stars as India Stoker, a reserved teenager whose father (Dermot Mulroney) has just died in a suspicious auto accident, leaving India and her mother, Evelyn (played by a convincing animatronic replication of Nicole Kidman), alone on a large estate somewhere in rural America. (Stoker was shot in Tennessee, but I don't recall them mentioning where they were exactly.) On the day of her father's memorial, a brother no one really knew the dead man had resurfaces, claiming to have been traveling in Europe and looking to help his widowed sister-in-law and niece get their lives in order. Charlie (Matthew Goode, Watchmen) is well-spoken and soft of step. He lurks about, exuding kindness, clearly too good to be true. Just what exactly is up with him and who he is for real is Stoker's central mystery. Mother and daughter both are drawn to him sexually. For Evelyn, he reminds her of when she first met her husband; for India, it's something more primal, like she and Charlie are cut from the same cloth.

The story moves slowly in Stoker. The script is primarily by Wentworth Miller, who is best known as an actor (he was the lead in Fox's Prison Break). Miller knows how to build tension and layer the right clues throughout his tale. As the revelations come, they never arrive out of left field. There are threads sewn throughout that eventually draw the whole thing together.

That said, the narrative also lacks any "specialness." Taken at face value, Stoker is a fairly conventional psycho thriller. What sets the film apart is Park Chan-wook's bold direction. The plot is mostly linear, but many of the individual scenes are not. The director and editor Nicolas De Toth (X-Men Origins: Wolverine) layer and double-back on sequences, often like fanning out a deck of cards and then picking the right ones as a magician would on stage. Or to add another metaphor--which would very much be keeping in line with Stoker's aesthetic--every image is a puzzle piece, and the way they lock together is often more compelling than the actions they show. Chan-wook brews a thick atmosphere, employing amplified sound effects and directing his actors to perform in a stuffy, disconnected fashion. Stoker is a sensual film, using color and texture to provoke the brain's pleasure centers, and then undermining these effects with the story's grisly events. It's a film that exists out of time, in a strange American space as envisioned by a Korean director who appears to have gorged himself on 1950s Hollywood cinema. There is an off-kilter nostalgia evident in every detail. The retro set decoration and the Lynchian time capsule quality to the fictional town evokes an era when the kind of evil that eventually comes to bear was hidden behind white picket fences.

This is all well and good, and Stoker is always interesting to watch, even as some teases and cues end up coming to nothing. Luckily, the movie's very last scene ends up being a perfect finale, a stinger that garners just the right reaction from an unsuspecting audience, meaning that regardless of how invested you were in what got you there, you'll likely leave the theater feeling pretty okay with what you saw. Then again, that's pretty late in the game to finally get it exactly right, and the thing that keeps nagging at me was whether or not the sum of all these parts is enough. I feel I was dazzled with technique more than I was convinced in the reality of the scenario. Throughout the film, giant boulders in the Stoker front yard are pushed around and used as markers. Each time, it's a lot of effort for very little result. I can't help but think Park Chan-wook is laboring here in much the same way as his characters. He marshals quite a bit of effort to push this rock up a very steep hill, but once he's at the peak, it kind of feels like it wasn't entirely worth the climb.