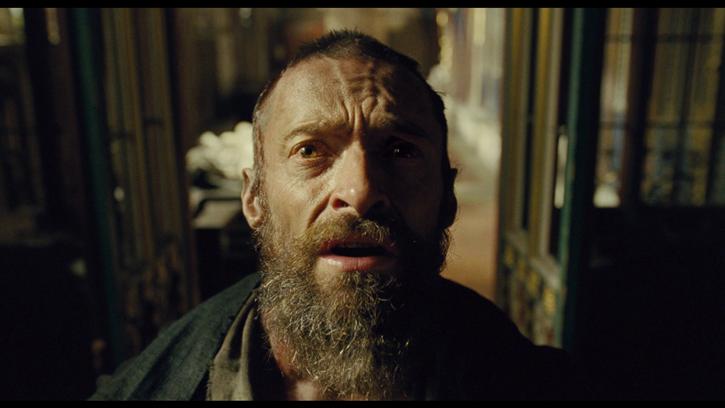 It all begins with the work of Victor Hugo. Les Misérables is based upon the timeless literary work of one of France's most beloved authors. He had a way with words that few writers are capable of tapping into and with his words he spoke to millions around the world upon the novel's original publication in 1862. The massive impact his work has had on countless individuals is still something that continues to this day. Les Misérables is one of the greatest books written, something profound, moving, and complex. It was written with a global perspective and everything about the novel seems to click perfectly into place: it's truly a book for everyone, worldwide, and the gift Hugo gave to humankind with his writing is something that is unforgettable.

There have been several adaptations of this story for film over the years. Some versions have been more in tune with accurately adapting the book than other versions. This particular version of the story is presented as a musical adaptation based upon the work of Alain Boublil and Claude-Michel Schönberg, whose successful stage musical version is what led to the film's creation. It has been an overwhelmingly successful musical and has been performed at various stages for an undeniably significant amount of time: the original production was presented to audiences over thirty years ago. It doesn't show any signs of disappearing, either; a Broadway revival is in the works for a run that should occur in 2014.

Appropriately subtitled as "The Musical Phenomenon" in it's advertisements, this film musical is not a version a filmgoer can recognize as merely adapting the story. It breathes its own sense of life into it, exploring the characters and story in a way that is not exactly what Victor Hugo had in mind, but that offers some interesting elements inherent to it's own ambitions. Hugo surely didn't envision the characters singing or the cinematic flair utilized within. The storyline doesn't manage to focus on every element of course. This is distinctly an adaptation, with an array of well-preserved elements and some changes along the way, including the epic ending sequence, which is more symbolic and that is perfectly utilized for the soul of the film and it's core message. 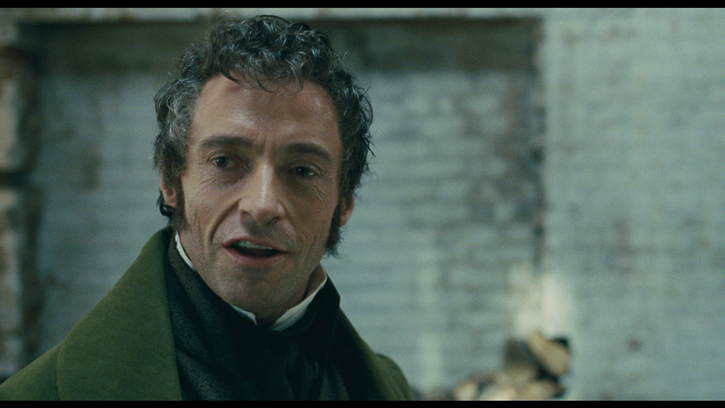 The story has many layers to it. The focal point of the story is the main character, Jean Valjean (Hugh Jackman), who is the central protagonist. Valjean was imprisoned for stealing a loaf of bread. He begins the story as an individual convicted and serving a prison sentence, and upon parole he is rejected by society. He receives the help of a kind Bishop (Colm Wilinson), who inspires in him to try to lead a better life. Yet a brief encounter places him within the threshold of the possibility of returning to prison as a convict, and he must thereby assume a new identity in order to try to overcome his past as Valjean and begin a new life of good actions.

Valjean begins to live a life with compassion and service onto others but he can't completely escape from his past in prison. Javert (Russell Crowe) is someone who recognizes him from his prison days as a police inspector. and whose recognition of Valjean inspires in him to try and recapture the former prisoner. This leads to Javert beginning a lifelong pursuit. Javert was born to a convict and gypsy and he has lived out his life trying to move past his family heritage as a respectable policeman distanced from his family's background, and he puts his complete faith in the path taken.

Valjean and Javert are not the only central characters. Indeed, Les Misérables has one of the most sprawling casts of characters in any novel written during the nineteenth century. In the course of the story, Valjean had become a respected person who operates a factory, and eventually he becomes a success in the business world and is well regarded by the people. 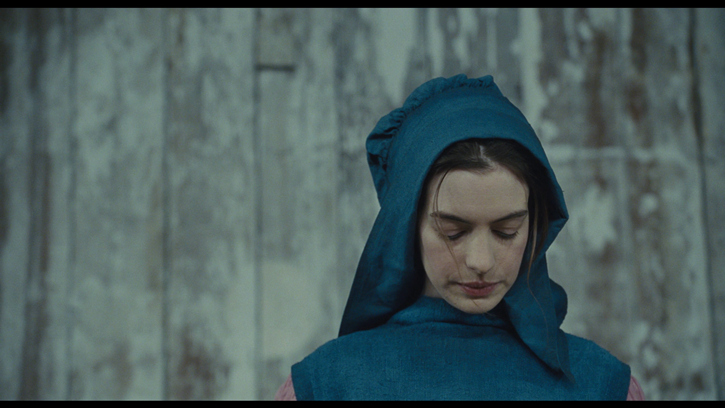 He even has an employee named Fantine (Anne Hathaway). Or rather, he did. She was fired from her job as an unwed mother. She was left to fend for herself and she sells some of her own teeth and prostitutes herself in order to help care for her young daughter Cosette (Isabelle Allen performs as young Cosette, Amanda Seyfried as the older Cosette) to live a life with the innkeeper Thénardier's (Sacha Baron Cohen and Helena Bonham Carter), who care for their own children but neglect her daughter, Cosette. Fantine grows sick and weary and upon her deathbed Valjean decides to promise to care for Cosette as his own daughter, whom he rescues from the Thénardiers.

Over the course of the story, things begin to complicate. A man is captured who is believed to be Jean Valjean. The real Jean Valjean decides to give a proclamation that he is, in fact, Valjean. He does this in an attempt to save this unknown man from a life of prison. However, the moment leads to him having to leave his life and the brighter good. He flees from the pursuit of Javert and lives with Cosette in a convent, and he becomes a man hiding from the events that unfolded. Cosette (Amanda Seyfried) is by any accounts his daughter and she falls in love with a young man these many years later, by the name of Marius (Eddie Redmayne), whose political involvement in France's June rebellion in 1832 is one of the culminating acts of the story.

This musical is unlike anything else ever done on film before. That is one of the main areas in which this film succeeds. It's rare to find a filmmaker doing something that no one has quite done before, and this film is a perfect example of that kind of ambition, as presented by the brilliant filmmaker Tom Hooper (The King's Speech, John Adams, The Damned United). 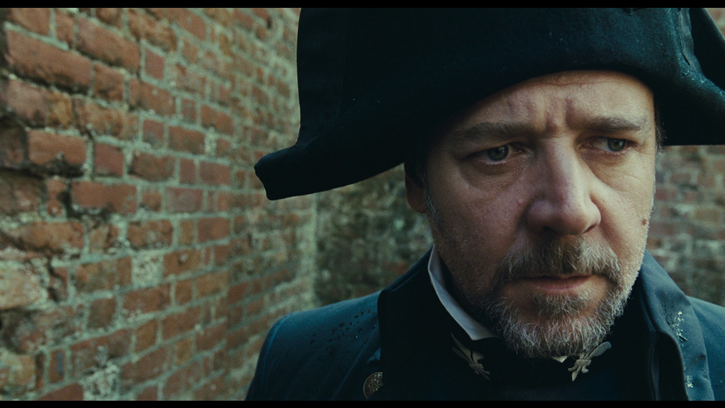 The music was sung entirely live while the actors were giving their performances. The rest of the sound design is naturally done separately, but the singing is raw and unaltered. This is definitely not the norm for making a film musical; not by any means. The typical path taken is to dub the songs separately with ADR and to overlap it with the footage. Most of the time filmmakers are essentially attempting to make it synch together well. I love musicals dearly and I'd say it usually does work wonderfully with the traditional method. Yet nothing can compare to what is done with this film. This is something else entirely.

I'm a big fan of film musicals period but I find the prospect of more films being made with live signing promising. With superb performances that are equally balanced with the singing and acting needs, the all-star casting really managed to make this film a major spectacle of the senses. It truly works as a phenomenon. Topping it all off is the Academy Award winning performance by Anne Hathaway, who delivered one of her greatest moments in any film, profoundly signing "I Dreamed a Dream".

This version of Les Misérables could revolutionize the way many musicals are made from now on. Hearing all of the singing done the way it is for this film is unlike anything that I have experienced as an audience member or as someone critiquing movies. It's entirely surreal to experience it for the first time. The emotions in the performances are heightened by the gravity of the singing. You just don't find many films capable of actually bringing forth this kind of overwhelming emotion, and it's not just because of the performances being brilliant, it's because the singing feels real and expressive in a way an "ordinary" musical can't express quite so easily with the power of solid sound-mixing alone.

Tom Hooper made an interesting decision in making an epic in scope musical adaptation the way he did. This is an impressively made film and it works primarily because it takes chances that other films won't take. It's an undeniably powerful work of artistry that will long live in people's hearts and minds. 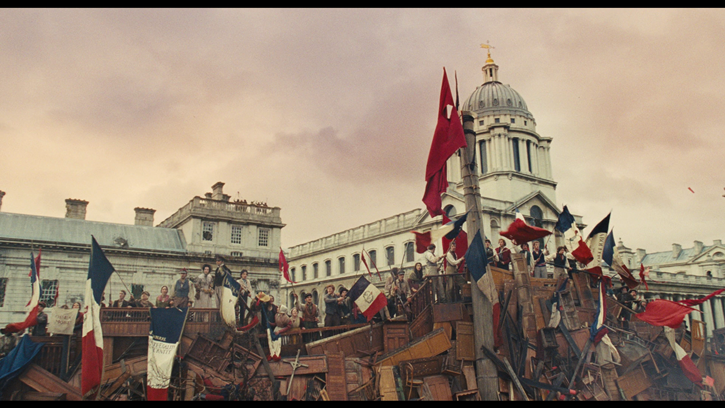 This is a stunning presentation of Les Misérables. The cinematography by Danny Cohen looks phenomenal. The film has a largely dark and blue-imbued color palate and this might be a bit different than what some audiences expect to find, but I thought it worked with the film well. The colors and details are crisp and refined. There are no compression issues to be found. It looks splendid in 1080p High Definition. This is as close to perfection as you can find in a transfer. The film is presented in its original 1.85:1 theatrical aspect ratio with an MPEG-4 encoding.

This is one of the best sounding 7.1 surround sound mixes you could imagine being released for the film. The music presentation is phenomenal, as it should be. The crisp voices of the signing and the score combined are in perfect harmony. The singing is clear and easy to understand in the film. The depth and clarity is a perfect match for the video presentation. This is one of the best DTS-HD Master Audio presentations one could hope to find for a musical, especially for something as ambitious as what we have here. 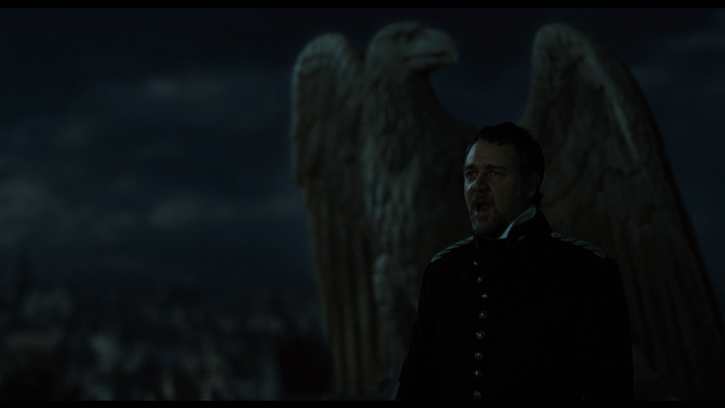 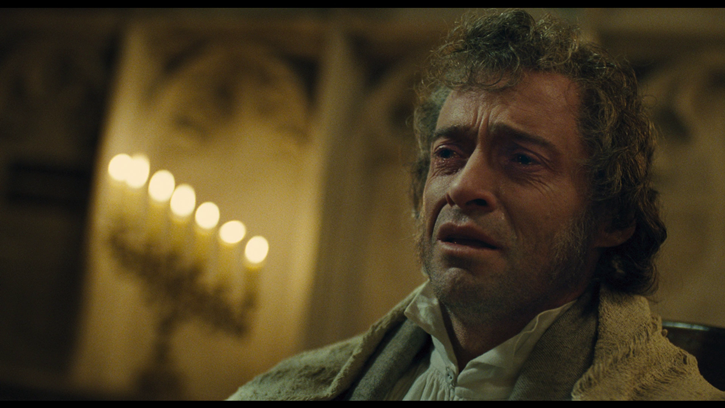 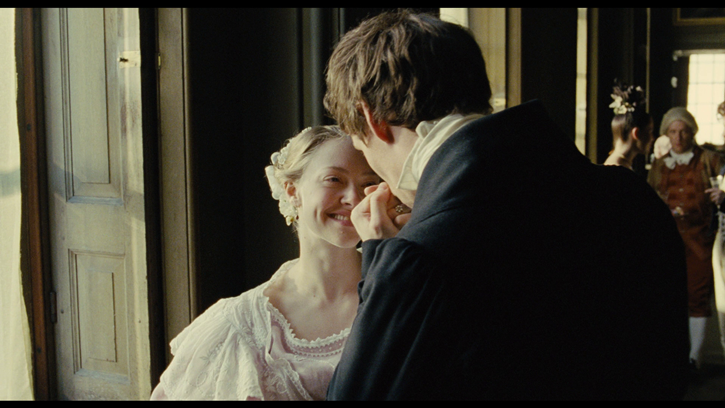 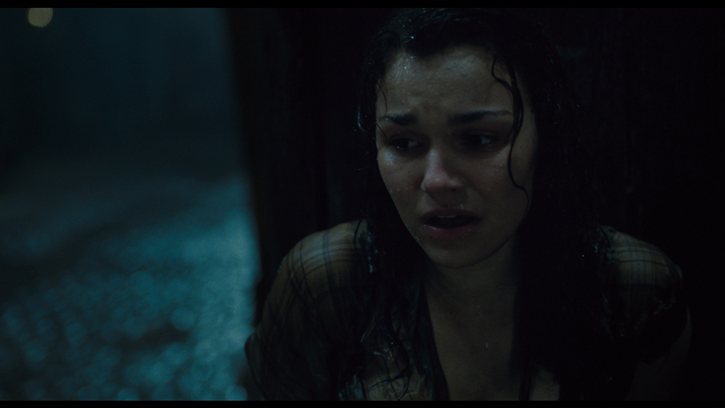 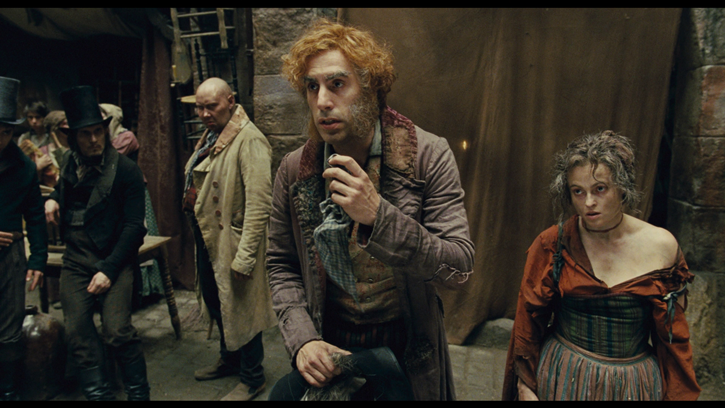 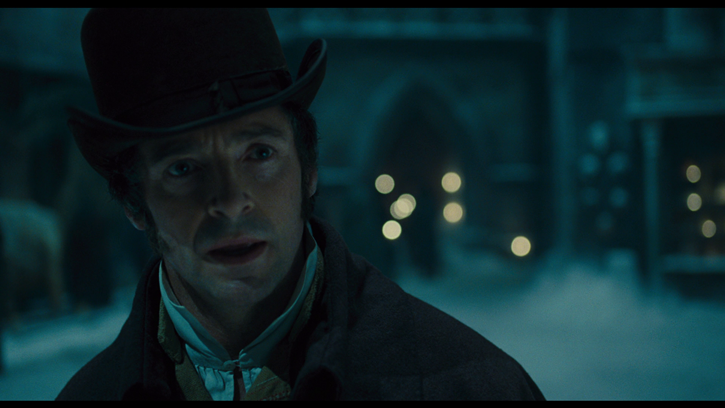 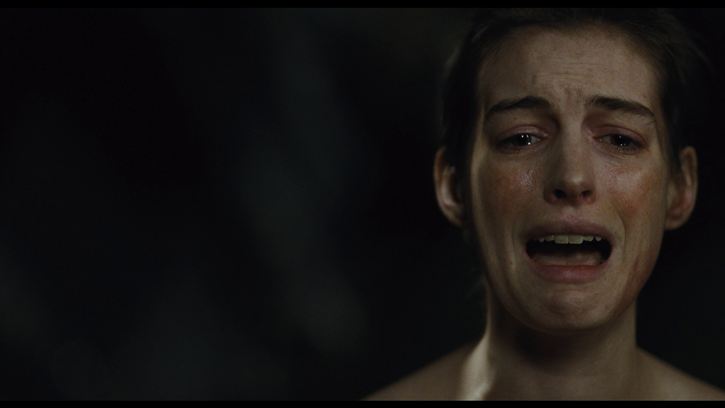 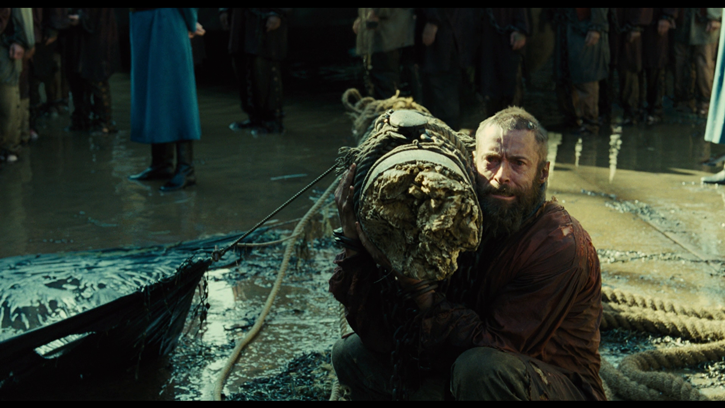 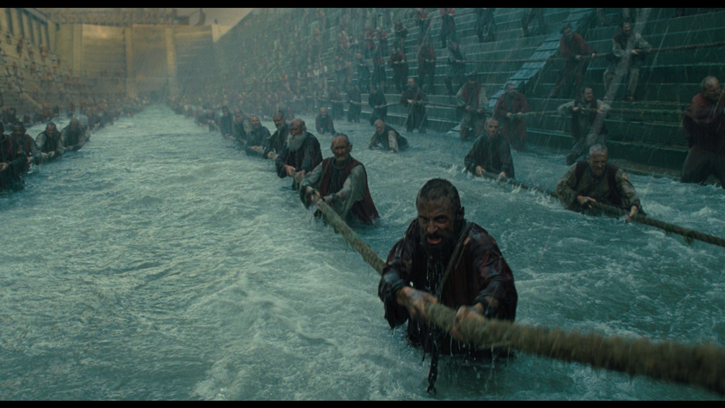 There are quite a few worthwhile supplements included on this release, including feature-length commentary by director Tom Hooper, who provides a lot of insight into why he made certain decisions as a filmmaker and about the approach taken with a variety of scenes.

There is also Les Misérables: A Revolutionary Approach (1080p, 1 hr. 4 min.), which covers the making of the film with interviews with cast and crew. I found some of the comments insightful and some a bit perplexing, but either way it's good to have some more information about the casting, production elements, and overall filmmaking. Fans will certainly enjoy having some additional material on the making of this monumental musical.

Lastly, there is a featurette entitled "The Original Masterwork: Victor Hugo's Les Misérables" (1080p, 11 min.) which explores the history of Victor Hugo and his novel. This piece essentially delivers a brief timeline of events relevant to the novel's creation. Within this featurette, a lot of ground is covered on Hugo's personal life and it is actually a worthwhile collection of information about the beloved author, and it has some details that I wasn't aware of before myself. 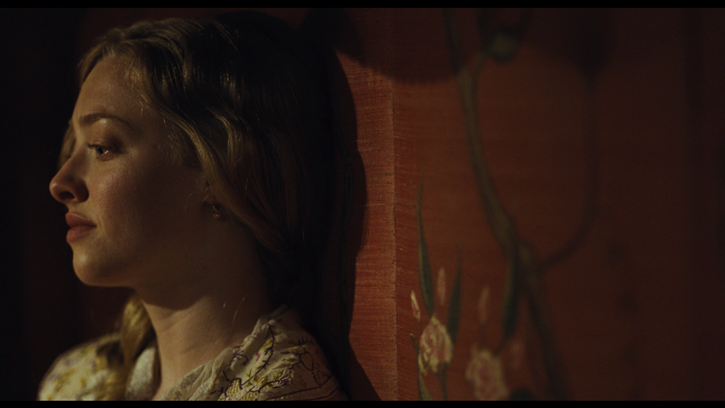 Les Misérables is a great movie musical. I don't think it encapsulates everything I cherish about Victor Hugo's novel (which remains my favorite novel), but it does manage to excel as an interesting adaptation with its own unique merits. The performances and singing blend together perfectly. The fact that the film was made with live signing is incredible. The casting was strong. This may not be a definitive version of Les Misérables when comparing it to Hugo's novel, but it's certainly something that can qualify as a definitive spectacle as Les Misérables: The Musical. This is ambitious filmmaking and one of the finest efforts of 2012. Make sure to experience this exquisite film and on Blu-ray in High Definition if you can. The technical presentation of the Blu-ray is quite marvelous and is sure to please with perfection rarely seen or heard.