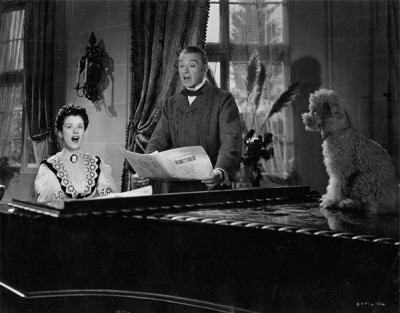 Few films are as up front with their intention to provide escapist entertainment as Clive Brook's 1944 adaptation of On Approval. Attaching his own prologue to the 1927 play by Frederick Lonsdale, Brook, who stars in the movie as well as writing and directing, brought in noted British newsreel narrator E.V.H. Emmett to humorously orient audiences to what they were about to see. Claiming a need to leave the troubles of wartime Britain outside the cinema, Emmett takes viewers back to the 1890s, to what he declares a much simpler time, though the comedy that is soon to follow is far more complicated that such easygoing intentions would suggest.

Brook plays George, the 10th Duke of Bristol, a destitute playboy making his way in society on whatever collateral his charm still brings him. The film opens on the scene of a party being thrown by Helen (Googie Withers), an American renting George's home. George and Helen share a flirtation, though it's light affection compared to the earnestness of the desire Richard (Roland Carver) expresses for the overbearing Maria (Beatrice Lillie). Like his drinking buddy, Richard is a man of some station who has lost his fortune. Maria, on the other hand, is stinking rich.

Maria returns Richard's interest and proposes a plan to ascertain whether they could make each other happy if they were to be married. Her late husband left her with an estate on a Scottish isle where she suggests she and Richard could go and spend a month together in order to see how they get on. Thinking his friend is making a terrible mistake, and also wishing not to be left behind, George contrives to go with them. Having her own designs on George, Helen also follows the would-be Mr. and Mrs. out there.

What follows is a smart and clever comedy of mismatched couples and bad manners. Both George and Maria are self-serving bullies, while Richard and Helen are kind people who, in his case, gets steamrolled over by his would-be wife and, in her case, sees all too clearly what a pain in the rear it would be to be the Duchess of Bristol. Love is gained and lost and then plans are hatched to claim it again. All the while, witty barbs are traded back and forth amongst the cast of characters, with George in particular zinging his fellow vacationers with savage intent and quite a bit of glee. The withering disdain in the language of these jabs is decidedly British, a blending of Coward and Wilde, dryly delivered by Brook, who is jaunty and wicked in the role. He leads the excellent cast through the film with sturdy panache.

Fans of this kind of material won't be overly surprised by the plot turns in On Approval, but there is plenty of visual inventiveness to be found in Brook's helming of the play. In addition to the amusing prologue, the star apparently also pulled out a different ending, including a crazy dream sequence that proves pivotal in the film's final scenes. For what is essentially a dialogue-driven rom-com, Brook is visually ambitious throughout. The dreams are foreshadowed by an earlier montage detailing the monotony of the early days on the island, and the movie's final shots are like something straight out of those Looney Tunes shorts where books come to life as a string of sight gags. As a director, Brook is not content to merely move the script from stage to screen as it existed, he goes out of his way to make sure this is a true cinematic adaptation.

Video:
The high-definition transfer of On Approval is in its original 1.33:1 aspect ratio, transferred at 1080p. The print used here is imperfect, with plenty of marks and surface noise appearing throughout the movie. Sometimes the edges of the frame lose focus, but otherwise the resolution is solid, with crisp lines and a decent balance in the black-and-white photography. In fact, any issues with the digital transfer would be down to the source material, there are no added problems such as pixilation or blocking. The overall image is stable throughout On Approval.

Sound:
The original audio is remixed in uncompressed PCM mono, though spread over two channels. The overall sound quality is decent, with nice tones and no issues with volume. Dialogue is all present and accounted for--but there is also some hiss that creeps in, particularly in the final third of the film, that mars what is otherwise a fine soundtrack.

Extras:
On Approval is packaged in a regular Blu-ray case, and it comes with a paper insert featuring a few photographs and liner notes.

Scholar Jeffrey Vance provides a detailed audio commentary that catches the viewer up on all the history of the film, including comparisons to the original stage play and the details of the production.

An interview with actress Googie Withers, recorded at some point before her death in 2011, gives us the first-person perspective on On Approval from someone who was there. This featurette is just under 17 minutes. She talks about the original ending of the film, which was reshot before release, and some photos from which can be seen in the stills gallery, alongside other images from the production.

FINAL THOUGHTS:
Hailed as one of the best films of 1944, On Approval is an intelligent, witty comedy featuring two British couples trying to get it together over a month on holiday, trying to decide if marriage is right for them. Clive Brook not only adapted the material and directed the film, but he also stars as George, the down-on-his-luck Duke of Bristol and a drinker with the sharpest of tongues. He trades gibes with his co-stars and maybe learns a thing or two about himself and what it's like to be with a person of the opposite sex for real. On Approval has a clever set-up and lots of funny lines, and is also visually daring. Highly Recommended.