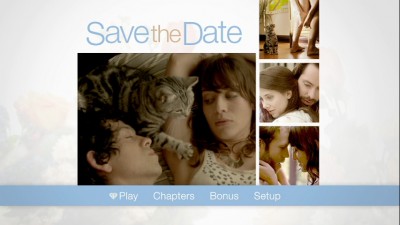 Two sisters are each dating separate members of a popular indie rock duo. The more together sister, Beth (Alison Brie from Mad Men and Community), is engaged to be married to Wolfbird's drummer, Andrew (Martin Starr, Freaks and Geeks). The less responsible Sarah (Lizzy Caplan, Bachelorette) is about to move in with the band's guitarist and singer, Kevin (Geoffrey Arend, TV's Body of Proof). Sarah doesn't have it all figured out--she's a cartoonist who dropped out of college and now manages a bookstore--but to her credit, she trusts her gut and is generally happy. So, we're not altogether against her when Kevin oversteps and sends the girl packing, forming the nexus of the interpersonal cat's cradle that is Save the Date, the latest directorial effort of co-writer Michael Mohan (One Too Many Mornings).

Save the Date dresses up in the trappings of a romantic comedy but slowly sheds those clothes and reveals itself to be something more. Actually, at first, it appears to be a twee urban love story, the kind of precious indie effort that becomes overwhelmed by its own quirkiness. I mean, just consider for a second what these people all do for a living--a cartoonist, musicians, and does Alison Brie even have a job? When Sarah is courted by the cute boy who has been admiring her at work, Jonathan (Mark Webber, Scott Pilgrim vs. the World) turns out to be a marine biologist. Of course, he does! These folks exist somewhere in a twentysomething world where everyone has the right kind of rumpled clothes, likes only cool stuff, and never have to worry about paying their bills. 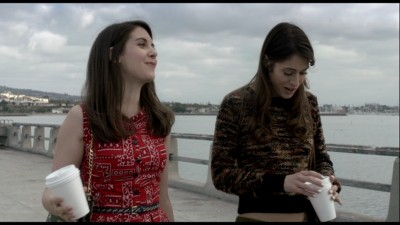 As the set-up fades, however, real life begins to take over and these stock characters start to become real people. Sarah's emotional hang-ups serve as catalyst for those around her to reveal their own difficulties. Andrew is unhappy with the way wedding planning is taking over his life, while Beth dislikes the constant diverting of attention to her needy sibling. Even good-guy Jonathan is given some room to roam and have an actual honest reaction to being mistreated. The script by Mohan, Egan Reich, and comic book author Jeffrey Brown (who also provides all of Sarah's illustrations) is less concerned with the usual notion of how people get together, and more about how they stay together. It makes for some heavy work in the third act, a job that Save the Date's excellent ensemble is more than capable of. Starr and Caplan have never been more real, and both Brie and Webber provide the right kind of emotional nuance for roles that pitch them dangerously close to being the bad guys. Only Arend feels a bit off, coming across as the one calculated performer amongst a group that appears more natural and spontaneous.

Then again, the sore thumb of Geoffrey Arend is indicative of those earlier complaints. Save the Date doesn't completely resonate because Mohan's direction lacks a similar spontaneity. The characters feel real, but their world never stops seeming just a little bit fake. I hate to use the word "hipster" to describe anything, but in this case, it feels like the filmmakers were more concerned with making a trendy indie that would be heralded at Sundance rather than something that was as raw as these kinds of relationships often become. Even Elisha Christian's camerawork, with its well-measured tilts and just slightly off-center framing, looks as if like it's been planned to create the illusion of being a lot less middle-of-the-road than Save the Date ends up being.

That being said, Save the Date is still a pretty solid effort, with a few unexpected story twists and impressive performances from a bright young cast. Definitely worth watching with someone you maybe have affection for, provided you two don't have some prickly emotional issues to confront yourself. Or perhaps, better yet, watch it if you do. Maybe seeing how it all plays out will inspire you to stop putting off that conversation you've been needing to have, and then your life can have that messiness the movie sometimes lacks. 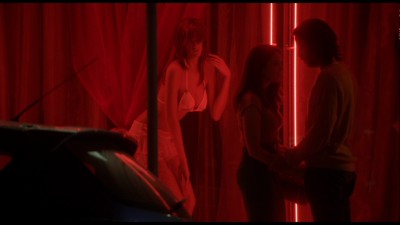 Video:
The widescreen presentation, anamorphic 1.85:1, of Save the Date is nicely rendered, with color and texture looking appropriately strong for an SD release in an HD world. Occasional jagged edges appear later in the film, but resolution is otherwise very sharp. Dark scenes look the right kind of dark without any inky crushing. Nice work all around.

Sound:
The movie is mixed in Dolby 5.1 Digital with good multi-speaker effects that build atmosphere without being obnoxious. Club scenes are nicely handled, with music being balanced with crowd noise and dialogue very well.

Extras:
IFC releases Save the Date with a nice handful of extras, though most are somewhat predictable in terms of choice and execution. The obligatory audio commentary with director Mike Mohan is fairly good, with a light tone and a penchant for behind-the-scenes stories that actually give us a good sense of the production.

Deleted Scenes are short and not very noteworthy, and there is also the usual outtakes reel. Together they both run just over 5 minutes.

There is a music video for the song Arend's character writes in the movie, throwing together clips of the film with footage of the actual singer, Hrishkesh Hirway, performing his tune, and two trailers. 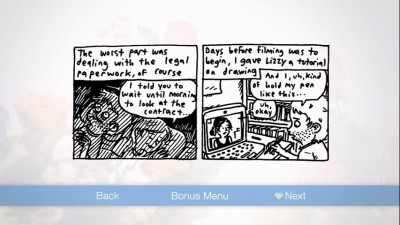 The most interesting extra, however, is Jeffrey Brown's minicomic that details his experience with the making of the film. This is one of the more unique DVD bonuses I have seen in a while. It's very enjoyable. The strips runs two panels at a time, making it easy to read on your TV. Brown's tale details the often long, occasionally arduous task of getting a script made--including breakdowns and break-ups, and the occasionally confused wandering.

FINAL THOUGHTS:
Recommended. Though Save the Date is at times lacking in guts, what starts out as a pretty picture about pretty people living inside a predictable indie movie slowly evolves into something totally real--a messy relationship story about young couples (and an old one, too) trying to figure out how this whole thing works. Carried by excellent performances from Lizzy Caplan, Alison Brie, and Mark Webber, the film doesn't entirely overcome its quirks and flaws--some will see the third act as taking some easy options, and though I loved the final shot, it will infuriate others (but then, I liked the end of The Sopranos)--but it's still a solid, entertaining effort from a gathering of good people. 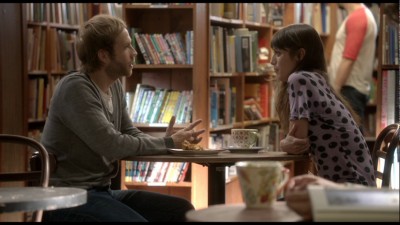