Image // Unrated // June 11, 2013 // Region 0
List Price: $59.98 [Buy now and save at Amazon]
Review by Stuart Galbraith IV | posted June 14, 2013 | E-mail the Author
My television historian friend and colleague Stephen Bowie likes to call The Dick Van Dyke Show (1961-66) the "Rolls-Royce of situation comedies," a good description. It is, more than half a century since its debut, still the Gold Standard, more so than the over-lauded, variable I Love Lucy, or performance-driven (but at least equally hilarious) iconic sitcoms like The Honeymooners and Sgt. Bilko. The Dick Van Dyke Show not only had its four peerless leading performers (Dick Van Dyke, Mary Tyler Moore, Rose Marie, and Morey Amsterdam), five if you count, as I would, Richard Deacon, they were equal to the show's consistently clever yet identifiable writing, particularly from creator Carl Reiner and the team of Bill Persky & Sam Denoff. Of its 158 episodes there are maybe three all-out clunkers and, in some ways, more important than its classic episodes, the average Dick Van Dyke Show is reliably good for two or three big laughs and a large batch of little ones. (Listen carefully and you'll often hear Carl Reiner himself laughing out loud, just off-camera.)

Image and Paul Brownstein Productions began releasing the series to DVD in season sets beginning in October 2003. Attractively packaged and loaded down with superb extra features, these sets are still among the best-ever TV-on-DVD releases to date.

Now the same series with the same extra features (with a couple of new additions), is out on Blu-ray. Clearly, if you've held off until now, and assuming you've got $163 (its Amazon price as I write this) to spare you probably should open a new window or tab on your computer and buy The Complete Series on Blu-ray right now.

But should those of us who invested in the original DVDs double-dip and re-purchase the entire show again, just to have it in high-definition? The series was on the air for five seasons, so you've probably already spent $85-$250 on the original series, no small investment. New extra features, for The Complete Third Season, are light, limited to about 15 minutes of new material, so one is mainly paying to see the show in high-definition.

Is The Dick Van Dyke Show funnier in 1080p? I'd argue that it is, though subtly so. The added clarity - and there is a considerable jump in resolution - brings episodes that much closer to the immediacy of those live-on-film performances. The added resolution, for instance, makes the subtleties of the actors' expressions (and, vitally, reactions) easier to see, though in Morey Amsterdam's case you might want to step back a foot or two. If watching the show in syndication, 16mm prints in the old days, Nick at Nite on basic cable later on, was like watching the show through a window, and on DVD like sitting in the back row of the studio audience, these new Blu-rays put you about in the middle of the second row. 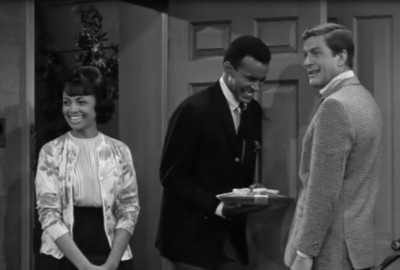 One of TV's finest (and funniest) moments, from "That's My Boy??"

The season gets off to a great start with its very first show, "That's My Boy??" in which Alan Brady Show comedy writer and new father (in flashbacks) Rob Petrie (Van Dyke) is convinced that the maternity ward has accidentally given him the wrong baby. Van Dyke and series creator Carl Reiner fuss over its (genuinely underrated) social significance in their audio commentary, but besides being very funny, what impresses most is just how matter-of-factly its delicate, identifiable story is handled. (Don't ask me. See the show.)

That episode also exemplifies the program's great strength and innovation in presenting the kinds of real-world situations and emotions that young, married couples genuinely experience. (And co-star Mary Tyler Moore really was young, all of 24 when the show began!) Though it sometimes regresses into I Love Lucy showbiz antics and slapstick, The Dick Van Dyke Show depicts the Petries as real people who regularly express the kinds of hopes and frustrations its Kennedy generation audience of similar couples knew well.

The third season is also where producer-writers Bill Persky and Sam Denoff really found their voice; after Reiner, they more than anyone else understood what made The Dick Van Dyke Show tick and especially how to write for its characters. Like Reiner's best shows, many of their episodes were semi-autobiographical. Case in point, "October Eve," which was based on something that happened to Persky's wife (or was it Denoff's?), in which a presumably destroyed nude painting of Rob's wife Laura (Moore) turns up in a prominent Manhattan art gallery.

Shows like "That's My Boy?" and "October Eve" also play up on Van Dyke and Moore's unsurpassed talent for expressing shame or embarrassment. ("Laura's Little Lie" isn't a particularly good episode but it's a great vehicle for Mary Tyler Moore, who spends almost the entire show in a state of utter panic, shame, and embarrassment.)

As detailed in Season One, Carl Reiner was originally set to play Van Dyke's role, but by the show's third season, any doubts about Van Dyke's talent and rightness for the role had long evaporated. Rubbery-faced and agile, he is the perfect balance of clown comedian and subtle actor. Wise-cracking Morey Amsterdam and man-hungry Rose Marie, as The Alan Brady Show's other writers (and loosely based on Mel Brooks and Selma Diamond) continue to offer a nice contrast to the relatively normal Petries, while the late, great character actor Richard Deacon, forever the butt of Amsterdam's Vaudevillian insults, remains one of TV's greatest straight men.

Nearly a decade ago, in my review of the DVD of The Dick Van Dyke - The Complete Third Season, I marveled at the "near-flawless series of transfers." Now those transfers seem muddy and murky compared to what's on these Blu-ray discs. Sourcing the original 35mm camera negatives, the detail of these 4:3 shows is remarkable. One notices little details: the textures of Rob's finely-tailored suits, Mary Tyler Moore's freckles, or the fact that the cell in "Dear Mrs. Petrie, Your Husband Is In Jail" has iron bars made of wood. The DTS-HD Master Audio (mono English only) is always sharp and clear. Though I miss the little 3-D TV sets the DVDs were packaged in, the logical organization here and menu screens make navigation easy. The Complete Third Season, offers all 32 half-hour episodes across three region-free discs.

Included are two "exclusive to Blu-ray features": a 10-minute clip of Mary Tyler Moore on The Danny Kaye Show (derived from, probably, wobbly two-inch videotape) in which Danny and Mary act out typical family sitcoms from other cultures, politically incorrect but funny material. Also included is a shorter excerpt from the Television Academy of Arts & Sciences tribute to Carl Reiner (in 2012), beginning with a videotaped tribute from Steve Martin, before really getting going as George Clooney surprises Reiner with the award and a heartfelt, personal tribute (to which Reiner responds in kind).

Everything else is ported over from the DVD versions, including production stills for most episodes; screen-specific audio commentary tracks with Carl Reiner and Dick Van Dyke; on camera interviews with the cast and crew, scattered throughout the set (interviewees include Amsterdam and co-executive producer Sheldon Leonard, both of whom have since passed away). The best of these has Reiner and Moore recalling Leonard's influence, whose wonderful gangster voice both Reiner and Moore imitate.

Also included is a complete episode of "The Danny Thomas Show" from October 1963 featuring Amsterdam playing his Buddy Sorrell character; excerpts from a May 1966 episode of The Magic of Broadcasting entitled "A Day in the Life of Sheldon Leonard," which offers rare behind-the-scenes rehearsal footage (possibly staged) on the Dick Van Dyke set (and in the editing room of The Andy Griffith Show); an excerpt from the 1975 series Van Dyke & Company, in an oddly cynical three-minute skit reuniting Van Dyke and Moore. Short excerpts from the 1963-1964 Emmy Awards are included. Sourced from ancient videotape, the clips are in great shape for their age, helpfully annotated, and fascinating for its glimpses at the all-star audience (Mel Brooks sits behind Reiner) and award presenters. Promo spots (some remastered in high-def) are included, along with Nick at Nite promos featuring Van Dyke.

The Dick Van Dyke Show is one of those no-collection-is-complete-without titles, and on Blu-ray The Complete Third Season really sparkles. A DVD Talk Collector Series title.