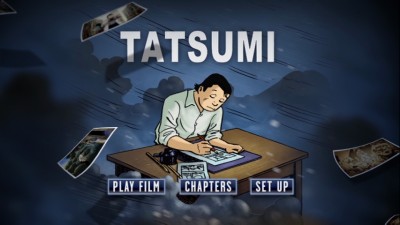 Japanese comics artist Yoshihiro Tatsumi has been enjoying an international renaissance over the last decade or so. For English-speaking readers, it began with a series of translated volumes showcasing his short work, curated by Optic Nerve-creator Adrian Tomine. Tatsumi's cartooning represented an aspect of manga (the Japanese name for "comic books") that has rarely been seen stateside. The artist pioneered a more adult, experimental style analogous to the alternative and independent comics we have over here, and a far cry from the toy tie-ins and girly anime that was popular amongst U.S. fans (of which I would consider myself one). This newfound attention culminated in the publication of A Drifting Life, Tatsumi's sprawling autobiography that focused on his childhood and the evolution of his career. It's an addicting read, and a valuable glimpse behind the scenes of the publishing world in Japan just after World War II.

Singapore-based director Eric Khoo has gathered together a wide breadth of Tatsumi material for his 2011 animated film, simply and appropriately titled Tatsumi. Far more than a standard biography picture, Tatsumi is a portrait of the artist via omnibus. It's an anthology of excerpts from A Drifting Life interspersed with adaptations of selected Yoshihiro Tatsumi short stories, all animated using the cartoonist's original art. Khoo's crew adopt an interesting rendering style, somewhere between the full animation of Persepolis and the flash-animated "motion comics" that Marvel and DC (and even Dark Horse) have been pumping out. The final product makes for an intriguing story unto itself, but it also serves as a tantalizing introduction to Tatsumi's bibliography. Best of all, it keeps the master craftsman's aesthetic front and center so that we never lose sight of the unique expressiveness that has made his many books continue to resonate with readers all over the world. 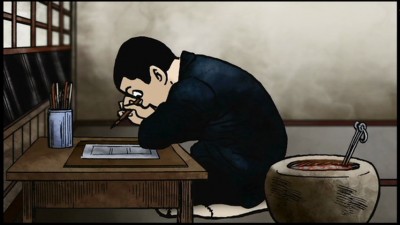 The short stories selected for Tatsumi are largely tales of post-War difficulties and modern workplace malaise. Tatsumi's characters all struggle with their place in a changing world, coming to sobering conclusions wherein their individual defeat reflects that of their nation's. The photographer in "Hell" wrestles with his feelings about Hiroshima and his own profiteering from the deaths that took place there, while the young man in "Beloved Monkey" struggles with the alienation of factory work and the older veteran in "Just a Man" sees himself as increasingly obsolete and attempts to regain some of his passion. The most stylized of the tales, "Good-Bye," is also the saddest, illustrating the effects of America occupation on women and families. Like much of Tatsumi's best comics, it also veers into the taboo. In this case, incest is used to show both the failings of the older generation and the isolation of their offspring. 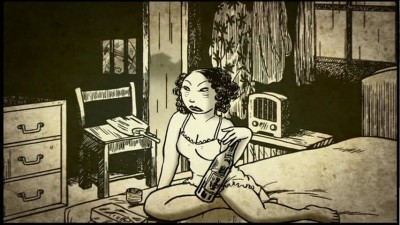 Tatsumi reads the narration for the autobio segments himself, speaking wistfully of his childhood and problems at home, developing his skills as an artist, and learning to make his own way in the world. Some of the details range from the perverse (the hostess asking for the artist's pre-chewed food) to the mundane (strolling through Tokyo), but there are also instances of personal connection that are surprisingly touching (young Tatsumi trying to earn money to help his mom; older Tatsumi meeting his wife). There is a subtle aesthetic shift as the movie progresses. When the artist grows older and more accomplished, so too does the animation. Likewise, the penultimate adaptation, "Occupied," has the most character movement of any of the fictional digressions, and it also shifts from black-and-white to color. This makes sense, as "Occupied" is the most self-reflexive of the chosen tales, detailing a failing manga artist's transition from children's comics to more adult literary endeavors, inspired by a particular brand of lowbrow expression. Like America cartoonists who borrow from their own lives, Tatsumi relates his experience with a cruel and critical eye, heightening his own foibles to the point that it's almost humiliating for him to share and the audience to witness. The irony, of course, is that unlike his characters, Yoshihiro Tatsumi is growing and learning and moving on from those early stumbles. The past does not weigh on him nearly as much as it does his creations.

The bulk of Tatsumi's personal narrative takes place in the 1950s, but we do get a quick montage leading through his developing career and his most recent success, finishing on a live-action image of the man at his drawing table. Though not as deep and rich as the book A Drifting Life, the movie Tatsumi is still a satisfying journey through the artist's work and an inspiring portrait of a man remained quietly devoted to his talent, developing his craft until he became one of the top journeymen in his field. If Tatsumi succeeds at anything, it should be to inspire you to go out and pick up the great artist's printed work, and to make you eager to see what he has coming next. 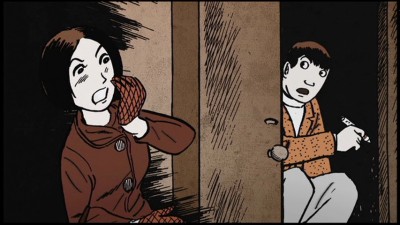 Video:
Tatsumi comes to DVD at its original widescreen 16:9 aspect ratio. Resolution is excellent, with no jagged lines or pixilation. Though the animation looks digital in how it's been brought to life, the drawings appear fluid on the DVD and the movie does not look like a digital transfer. Colors in the modern day sections are vibrant, with a watercolor shimmer effect that works quite nicely. The distinction between the black-and-white segments, and the contrast within those, including the added color, look really good.

Sound:
The original Japanese soundtrack is mixed in stereo with nice ambient space being created even within the limited range. Sound effects are balanced against the predominant voiceover to give a sense of an authorial voice commenting on the action playing underneath.

The optional English subtitles are clearly written and easy to read.

FINAL THOUGHTS:
Highly Recommended. The animated feature Tatsumi is the best kind of biography: it both expresses a life and the unique aspect that made it worth sharing in the first place. In this case, it's both an expression of the life of literary manga pioneer Yoshihiro Tatsumi and an examination of his work. Director Eric Khoo cherrypicks segments from Tatsumi's memoir and splices them together with adaptations of his short manga stories, copying the cartoonist's vivid linework to create a living, breathing facsimile of the printed page. Tatsumi is truly a special gem, both for the animation genre and international cinema. It's at times moving in ways that are both funny and heartbreaking, and overall, a damn good yarn. 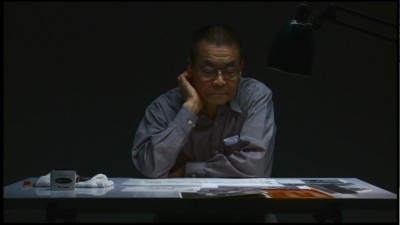