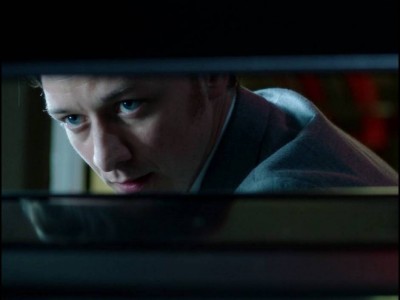 I think it was William Carlos Williams who wrote, "So much depends on a woman's pubic hair, glazed and freshly shaved." I don't know why they don't quote him on the poster for Trance. It does, after all, contain what may be cinema's most audacious plot contrivance for getting an actress to go full frontal. Danny Boyle, ladies and gentlemen, fresh from tossing the Queen of England out of a helicopter for the Olympics, has now tossed Rosario Dawson's modesty into the same deep ocean where he hopes the rest of us have buried our intelligence.

But then, that's just one of many contrivances that forms the skeleton of Trance, which is less a movie and more a series of stacked convolutions and non-sequiturs, building to a big reveal that actually unveils very little. It's the same feint that Boyle pulled with Slumdog Millionaire a couple of years back, cynically shucking and jiving us with his slick wielding of a camera. It's a simple shell game. Just keep everything moving and layer on the distractions and maybe we'll never notice that there are only empty vessels and no peas to be found beneath them. Except this time instead of a television game show in India, the director has set up in a swank London auction house. Instead of prize money and a girl, the score is a one-of-a-kind painting. It's an art-museum heist movie where the main player has forgotten the heist. Call it Slumdog's 12.

James McAvoy stars as the thief, Simon, a gambling addict who becomes the inside man on the theft of a priceless Goya. Simon sets up the score with Franck (Vincent Cassell, who was for real the bad guy in Ocean's 12), a crime boss he's indebted to. Except something goes wrong, Simon pulls a double-cross, and he takes a blow to the head during the robbery. When he comes out of it, he can't remember where he hid the painting. His double-cross has crossed back on himself. 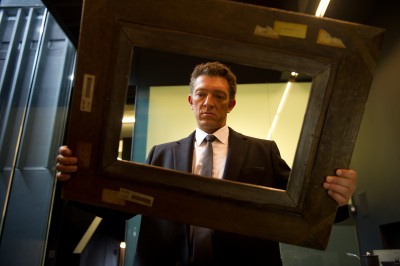 In order to jog his memory, Franck takes Simon to a hypnotherapist. It doesn't take long in their first session before the doctor, Elizabeth (the aforementioned Miss Dawson), realizes Simon is lying to her. She puts a few things together and sees her own opportunity: if Franck and his cronies cut her in on a share, she will unlock Simon's brain and tell them where he's hidden the loot.

What follows is a series of increasingly ridiculous set-ups. Elizabeth digs into Simon's psyche with a Brian De Palma-brand shovel, exploring tunnels that loop back around and cave in on themselves. The more she uncovers, the more the truth becomes buried, all in the hopes that the audience will keep guessing. Which, technically, is kind of easy when there are no right answers. I can't recall for sure if I knew that Trance was full of crap before or after Elizabeth pulled out her electric razor for a quick groom, but it was definitely then that I knew there was no coming up for air, not out of this dung heap. Boyle and his writers, Joe Ahearne (the BBC series Ultraviolet) and John Hodge (Trainspotting), abandon any pretense of crafting a psychological thriller of any value. The story doesn't have to make sense if you can hit "reset" every ten minutes and say you're making it all up. 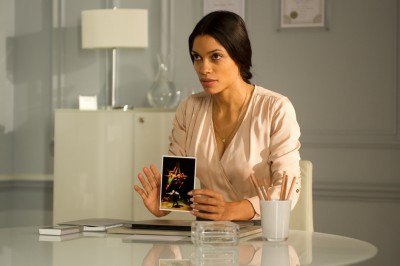 I'd like to know at what point Danny Boyle became so cynical about his own art form. When did he abandon trying to challenge audiences and instead decided to start feeding us a slick flow of bullshit? It's good looking bullshit, mind you, expertly arranged to appear as appealing as possible. Boyle polishes turds better than anyone. Which is why I think he keeps getting away with it. Advance word on Trance is fairly positive, and the trailers certainly sell the high-concept with panache. Most of the time these days I end up complaining that the marketing of a movie misrepresents what's really there. Strong, complicated efforts like The American and Killing Them Softly are packaged and sold as high-gloss star vehicles, scaring away the people who might otherwise want to see them and disappointing those who are duped by the television commercials. For once, Trance is exactly what they are pitching. It's basically a 100-minute trailer. There's no believing its own hype, because it's nothing but hype. Trance is a compilation of music videos connected by dream sequences, growing more brutal and depraved as it becomes increasingly intoxicated on its own vapors. I guess that's the problem with having to constantly up your own game: if you start in a violent place, you end up in an even more violent place. Keyser Söze is no longer an intriguing con artist, he's instead revealed to be a sexual predator and a sadist.

Gah! The more I think about this movie, the more gross I find it. The more I type, the angrier I get about how it tried to pull a fast one and manipulate me into thinking it was building a convincing mystery of the mind rather than what would otherwise be just a straight-to-DVD exploitation picture. An hour ago, I'd have said folks should at least rent it, there's a lot of good work by the cast and crew, even if it all does just drown in a cesspool of filth and stupidity. Now, I'd loathe to recommend anyone throw Trance a life preserver. Save your dollars, let this thing sink so far from our memory no amount of hypnosis will ever dredge it back out. 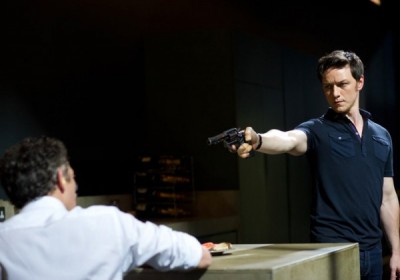