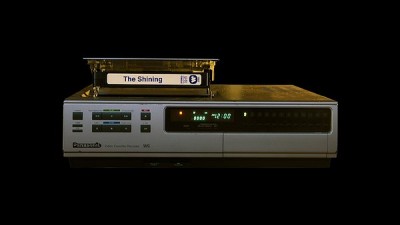 I never thought a movie could replicate the experience of being on an internet message board, but the documentary Room 237 essentially does just that. Filmmaker Rodney Ascher has gathered together a handful of crackpot obsessives who have spent way too much time thinking about Stanley Kubrick's 1980 horror film The Shining and basically gives them a space to share their opinions and observations unchallenged, creating a kind of crazy five-way dialogue that spans whatever cultural and geographical boundaries that might otherwise separate them. Though we are told the names of these commentators--most of whom are impressed with their own powers of perception past the point of rationality--they are essentially anonymous, appearing only as disembodied voices. Ascher assembles a collage of film clips, from The Shining and other Kubrick movies, as well as other random clips from Italian horror films, silent epics, and presumably whatever he thinks will fit, bringing each theory to life and trying to construct a big-picture puzzle from all the different analyses.

The various interpretations range from the deeply serious to the outright kooky. Some build on things that Kubrick said, others work from urban legends and whispered rumors. Compiling them serves to tap into the conspiracy hivemind of the late 20th Century. Take your pick from the various possible explanations. Is The Shining an incendiary depiction of the genocide white settlers perpetrated on Native Americans? An allegory for the Holocaust? Stanley Kubrick's metaphorical memoir admitting his part in faking the moon landing? Or is The Shining just a mind-melt that doubles back on itself, pulling codes and symbols out of ancient myth and horror genre tropes? Your guess is as good as mine. With Kubrick having shuffled off this mortal coil, and most of us not having the time to watch our Shining Blu-rays frame by frame for the duration of whatever pharmaceutical buzz we can muster, we're just going to have to take these folks' word for it.

How you end up feeling about Room 237 is going to be reliant on many factors. One, how much you love The Shining. Two, your appreciation of semiotics. Three, your patience with the annoying people you meet on the bus who have life all figured out and just have to tell you the secret to their personal philosophy. What Ascher cobbles together is not entirely without value. Room 237 highlights quite a number of anomalies and patterns in The Shining, and a few of the coincidences that the Kubrick fanatics have uncovered are kind of neat, particularly when they match up some of the visual and thematic motifs to the director's other efforts. Gathering them together as a whole package, however, only succeeds in underlining how unconvincing these readings are. Let's talk turkey: if you decide to fixate on one symbol, idea, or meaning, you will more than likely find several corresponding elements to back up your argument. When you've already made up your mind, a fluke goes from being a surprising accident to a profound connection. Great, five minutes out of 144 match up with the etchings on your decoder ring, but what about the other 139? Each individual batting average is roughly equal to the proverbial broken clock. You're about as on-point as whatever stoner originally decided to play Pink Floyd during The Wizard of Oz.

The problem with Room 237, again, is also what causes many to complain about the internet. Credentials are unimportant, source citations are inconsequential. Every opinion is given equal weight, and the veracity of none is called into question; thus, any compass by which we discern truth is rendered pointless. Append your nonsense with film theory and principles of physics all you want, it's still nonsense.

In short, Room 237 is a well-constructed DVD bonus feature masquerading as a legitimate movie. Rodney Ascher cuts film clips together very well, and he manages to give form to the formless in how he picks and chooses from amongst the rambling testimonials of his participants, but after a while I found it all to be a bit much. If the bus comes to your stop and the crazy guy follows you onto the street, you call the cops, you don't invite him into your home. Or to put it another way, checkout time has long since passed for these guests of the Overlook Hotel, it's time they stopped loitering in the lobby. There are actual customers waiting to have their say who can pay with legitimate intellectual coin, not Monopoly money, and it doesn't require psychic powers to tell the difference.