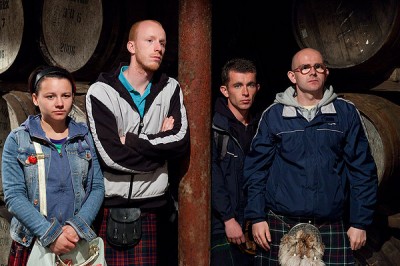 Well-respected British filmmaker Ken Loach (Kes) returns to Scotland for his latest feature, The Angels' Share, a sublime and genuinely heartwarming drama about a quartet of criminal misfits who make an appeal to whatever heaven they believe in to change their lives.

In particular, the script by longtime Loach collaborator Paul Laverty (The Wind that Shakes the Barley, Even the Rain) focuses on Robbie (first-timer Paul Brannigan), a petty thug granted one last chance by an understanding judge. Since Robbie's girlfriend (Siobhan Reilly) is expecting their first child, he is given community service instead of a prison sentence. It's there that Robbie comes under the tutelage of Harry (John Henshaw, The Red Riding Trilogy), the man in charge of the work crew. Harry takes a liking to Robbie and ends up introducing him to the pleasures of high-end whiskies. The boy is a natural when it comes to identifying brands, and he starts to imagine a future for himself in the liquor business.

Perhaps it's to be expected that this future comes via an unexpected opportunity. At a whiskey tasting, Robbie and the other parolees hear about a very rare cask of whiskey that is about to go on auction. They devise a plan to steal some of it out from under the nose of the distillery housing it, which they can then sell on the collector's market. It's a plan daring in its simplicity. Get in, get out, no one is the wiser.

Which is exactly as it turns out. Loach has no tricks up his sleeve here, but that's okay. The Angels' Share is a heist film that isn't really about the heist. It's a movie about second chances, told in Loach's usual Neorealist style. His presentation is direct and lacking in affectation. With a minimum of music and absolutely zero fluff, the seasoned director and his writing partner open the window on their characters' lives and invite us to take a peek. It's a story with humor and heart in equal measure.

Paul Brannigan, who has already lined up several more gigs, is a natural actor given a heavy task for his debut. Robbie is in just about every scene in The Angels' Share, but Brannigan captures each moment perfectly, delivering his lines with an easy sincerity that makes him utterly believable. Robbie is a man struggling not to be trapped by fate, to break the cyclical nature of criminal behavior. Laverty's story sets him up nicely, putting him on the road to redemption but then also giving him the right kind of motivation to take a crooked path to getting straight. There's not really much moral equivocating. It's hard not to see duping millionaires with disposable income as a victimless crime.

The title The Angels' Share refers to the 2% of any batch of whiskey that evaporates every year while the alcohol ages. It's the small sacrifice made to providence that the superstitious might say ensures the health of the rest of the barrel. It makes for a nice metaphor, particularly as Robbie makes amends by being a tad less greedy. There are several instances in the film where one character passes on a kindness done to them, paying back the good fortune that came their way. It's a design for life that should be obvious, but that is too often taken for granted or puffed up with self-importance and "pay it forward" platitudes. Loach presents it here as a necessity, as the only way to get along. The Angels' Share is more common sense than sermon, and an absolute breath of fresh air.