There is a popular blog called "Dogshaming" where pet owners send in photos of misbehaving canines posing in a humorous semblance of guilt. If they had a picture of a dog who ate a birthday cake and all the wrapping off the presents and vomited both up in a colorful pile of frosting, confetti, and stomach acid, I would simply post that image here and let it stand as my review of Baz Luhrmann's embarrassing adaptation of The Great Gatsby. As no such photo exists, I am instead charged with reliving the shtick and the spectacle of a once-visionary director dismantling one of the greatest achievements of American literature.

Cheat sheet summary: The Great Gatsby is a 1920s drama about a self-made man of mystery, Jay Gatsby (Leonard DiCaprio), who has built a lavish life for himself out of an obsessive hope that he can woo back his lost love, Daisy Buchanan (Carey Mulligan). Since the outrageous parties he throws fail to draw Daisy to his house, Gatsby enlists her cousin, Nick Carraway (Tobey Maquire), a bonds salesman of humble means, to help him complete his plan. In the five years they have been apart (Gatsby had left to go fight in WWI), Daisy has married the wealthy Tom Buchanan (Joel Edgerton). Tom is a brute and a philanderer--everything Gatsby is not. But Tom also sees through Gatsby's inventions and there is a push and pull for Daisy's affections, leading to murder and ruin and general unhappiness for all.

The narrative of this hip-hop staging of The Great Gatsby follows F. Scott Fitzgerald's 1925 novel pretty closely, hitting all the major story points, of which there are technically few. The Great Gatsby has never been famous for its plot, per se, but how that story is told, how Fitzgerald's lyrical prose brings his themes to life. His characters are practically mythological in their bearing, more akin to the figures of Greek tragedy. They are difficult to make flesh--and as of yet, no filmmaker has been successful--because once actors like Leonard DiCaprio (or Robert Redford and Alan Ladd before him) show up with their image and their baggage, it's hard to maintain the question of whether or not these people are merely hollow constructs or genuine souls gone wrong. That is what makes the novel so intriguing nearly 90 years later: the illusions become real and then become illusions again.

Baz Luhrmann, on paper, may seem like a great choice for The Great Gatsby. His best movies, William Shakespeare's Romeo + Juliet and Moulin Rouge, are all about artifice. If nothing else, one should have expected his Gatsby to be a zippy visual extravaganza, rendering Jay Gatsby's epic parties and decadent displays with virtuoso indulgence. Such is not the case. Judging by The Great Gatsby, the director has used up all his tricks, and like the misguided individuals his movie portrays, is now desperately grasping at a past he can't replicate. The Great Gatsby is an overlong, turgid pile-up of missed opportunities and poor judgement. Luhrmann's empty aesthetics can't bear the weight of complex metaphors. Any subtext he and his regular co-writer Craig Pearce (Charlie St. Cloud) have mined from Fitzgerald's novel are turned into gaudy symbols, the figurative made literal.

Early reports from the production touted what was supposed to be a revolutionary use of 3D technology. It was said that Luhrmann was going to use 3D to achieve a depth of field previously unseen on motion picture screens. Not only does this not come to pass, but it's also terribly ironic, since depth is nowhere to be found in the writing. In terms of performance, at least two dimensions are being left untouched. Both DiCaprio and Mulligan flounder in Luhrmann's shallow pool, and Tobey Maguire is woefully miscast as Nick Carraway, an observer and a thinker. There are few things that Maguire does on screen less convincingly than think. That Luhrmann and Pearce have concocted a framing sequence by which Carraway tells the story to an interested listener only goes to show how smart Ang Lee was to cut Maquire from the similar frame in Life of Pi. That was an Oscar-winning decision right there.

The failure of the leads opens the door for the supporting cast to distinguish themselves. Newcomer Elizabeth Debicki is perfect as Jordan Baker, Nick's love interest, and Isla Fisher (Bachelorette) is also fantastic playing Tom's mistress. That said, it's Joel Edgerton (Warrior) who ends up owning The Great Gatsby, and you know something is wrong with an adaptation like this when the bad guy is also allowed to so thoroughly own his rival. In the big confrontation between Tom and Gatsby, Edgerton wipes the hotel room floor with DiCaprio. In terms of the plot, Gatsby is supposed to be dominated here, but in terms of performance, Leo is dominated for all the wrong reasons. 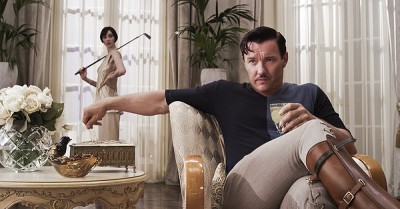 I could go on for pages about everything that is deficient with The Great Gatsby, but like the film, I fear this review has already worn out its welcome. It's not just a lacklustre adaptation, it's a bad movie full-stop. There is very little to compliment here. The editing is sloppy, the soundtrack (overseen by Jay-Z) lacks any razzle dazzle, and from scene to scene, Baz Luhrmann hits all the wrong notes. It's almost an accomplishment unto itself, how perfectly he blows it. Maybe someone should get a hold of a print of The Great Gatsby and start a blog of terrible animated gifs from the movie. Call it "Bazshaming."

There you go, internet. Your free idea for the day. Don't let me down!