Oz the Great and Powerful


By no means do I consider myself an expert on The Wizard of Oz, though I do respect any effort to extend an already established mythology. In seeing the film and recently seeing the musical Wicked, I have seemingly come to look at more efforts to extend mythology from L. Frank Baum's work. In addition, admittedly, providing a backstory to the mysterious, scary Wizard was intriguing, even more so considering the director and some of the cast involved in said effort. So why not look at the resulting work?

Mitchell Kapner (The Whole Nine Yards) and David-Lindsay Abaire (Rabbit Hole) wrote the screenplay that Sam Raimi (Drag Me To Hell) directed. Oscar Diggs (James Franco, Your Highness) is a magician in a traveling circus where he screws his partner Frank (Zach Braff, Garden State) out of more of a cut of the profits while romancing women at every stop. His antics catch up to him and he flees in a balloon, which is caught in a twister and sent to the Land of Oz, where he meets a flying monkey named Finley (voiced also by Braff) and a living China Doll (voiced by Joey King) whose family were destroyed by the Wicked Witch. He also finds Theodora (Mila Kunis, Max Payne), sister of the Wicked Witch, who takes a liking to him. Theodora also has a sister in Evanora (Rachel Weisz, The Bourne Legacy), and they both try to make Glinda (Michelle Williams, Take This Waltz) out to be the "Wicked Witch" when it turns out Evanora is the scheming one. As Oscar learns more about his destiny about being the Wizard, he becomes more and more reluctant to take over those reins. 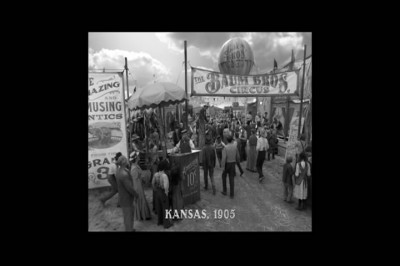 On the topic of Raimi's vision for the film and how things unfold before our eyes, I think we can all find a consensus that the vision is great. It has a look to the past and creates it appropriately, and when the chance to get to Oz presents itself, Raimi leaps at the chance. Yet with this glossy, polished look at Oz, the past is kept in mind with the many different looks and modern technology Raimi uses in the film, particularly in the final sequence. All of the stars in the film do well in their roles helps also; Franco generally does well as Oscar, with occasional moments where he subconsciously (in my mind) slinks into his Pineapple Express role of Saul, where he is somewhat dimwitted yet eager to tackle the task at hand, even if he lacks the resources to complete it. Williams is perfect for the Glinda role and Weisz is quietly good as Evanora. Kunis is a little bit of a mixed bag as Theodora; her looks make her amazingly perfect for a film set more than a century ago, and I would be interested to see her do another film in a similar era. However, when we learn who the real Wicked Witch is, the commitment feels halfhearted in execution.

While the direction and most of the performances are solid, the story tends to not live up to the vision. This is something I found when watching Wicked as well, the manner to link Baum's story to the one being told in front of you, and once that clicks in for the viewer, everything else is window dressing. But Oz The Great And Powerful takes a while to get to that point, and does so with a story that just is not imaginative, it is checking off boxes on a manipulated emotions list. The better way to say it is that Oz is almost doing a live action version of a present-day Pixar film. Not the ones from three or four years ago either, the uninspired ones with storylines that could get scoffed by the viewer.

Whether it is creating an alternate story that flows parallel to the existing one as Wicked does or creating a background to a vital character as Oz does, both tend to lack one key thing, and that is emotional resonance with the viewer and buying in to the suppositions both productions try to assert. One masks this resonance with singing, the other throws a lot of pretty faces at it, and when push comes to shove, only one (Williams) is really worth seeing in these long-familiar characters. Oz The Great And Powerful promises and delivers on a fascinating travel location, but the journey to get there is underwhelming at best. 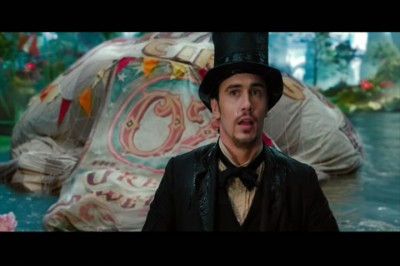 
While the 3D version was not available for review at the time of this writing, the 2D version still looks breathtaking all the same. Using the AVC codec, the film starts in 1.33:1 black and white before transitioning to 2.40:1 color, and the many different colors look splendid, with little qualms over saturation problems. Detail in the foreground and background is ample and clear, with the background detail looking more discernible than I was expecting. There are no distracting moments of DNR and there is a hint of film grain while viewing to boot. All in all, Disney does a great job with the film.


The DTS-HD Master Audio 7.1 lossless surround track for the film packs a punch as one would hope a Raimi film does. The subwoofer engages early and often, even on the black and white moments, and provides ample immersion in quieter moments, like when Oscar finds the room with the endless amounts of gold, his throwing and rolling around of the pieces fills up the channels with effective panning and directional effects. Dialogue is clear and well balanced in the front of the soundstage, and Danny Elfman's score fills up the speakers when called upon. Excellent listening material.


First things first, starting with a second screen experience (via downloadable app) which as of this writing did not sync at this time. Next is "Walt Disney and the Road to Oz" (10:13), where the importance of the book to Disney is recalled, along with the attempts to make it into a television show are mentioned, with interviews from the surviving Mouseketeers to help illustrate this. How the story impacted other Disney films is talked about as well. Next is "My Journey in Oz" (21:43), where Franco in a self-directed film interviews Raimi, Braff and Kunis and they talk about the story and their approaches to the characters they play. It is interesting to watch for their interview responses seem to be different than a normal EPK, and Raimi is more of the focus here than anyone, but they talk about production challenges, dealing with CG elements and other points of interest. Kudos to Franco, it is interesting. Following that is "China Girl and the Suspensions of Disbelief" (5:26), where the puppet masters for China Girl are interviews and talk about their ideas for her movements and how they went about doing them. 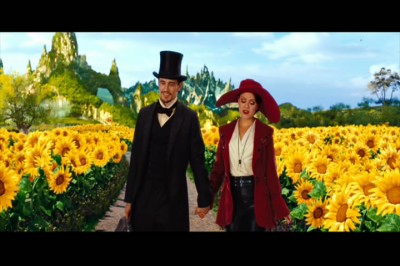 Next is "Before Your Very Eyes" (11:02), where the challenges of set design for Kansas and Oz are covered, along with the inspirations for same, along with a set tour here and there. "Mila's Metamorphosis" (7:43) covers Kunis' prosthetic transformation (and another lesson of how cool she is), while "Mr. Elfman's Musical Concoctions" (7:13) illustrate Elfman's intent for the music, occasional breakdown of a moment here and there and the relationship with Raimi in general. A blooper reel (5:06) is next. There is also a standard definition copy of the film (the source of the screen grabs), a redeemable code for a digital copy of it also, and a separate code for the upcoming Long Ranger movie with Johnny Depp as well.


While the attempt of Oz the Great And Powerful is admirable and Sam Raimi's attempt to break new ground is respectable, it is hard to when the story in front of it contains nothing but dull razors and uninspired story mechanisms. Technically the disc looks and sounds like a peach and from a bonus material perspective was definitely a change of pace from what I am used to seeing, this title earns little more than a rental to see what was done with it before making a decision based on how much of an Oz guru one may be.