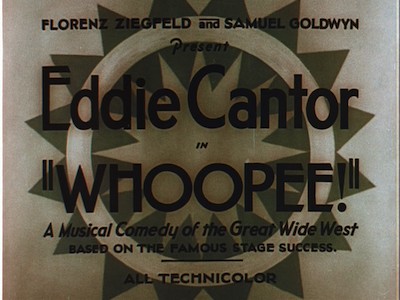 The 1930 musical comedy Whoopee! is a film remake of what had been a successful Broadway revue for its star, Eddie Cantor, only two years earlier. It features one of the performer's signature toons, "Makin' Whoopee," as well as several other recognizable songs. Its plot is fairly bare, with the story largely existing to connect comedic set pieces and dance numbers, but that doesn't stop Whoopee! from being a lot of fun--somewhat dated fun, but fun nonetheless.

Old Banjo Eyes stars as Henry Williams, a hypochondriac convalescing in the American west. There he sticks out like a sore thumb, being more dandy than dude, though the ladies like him. In particular, his nurse, Mary Custer (Ethel Shutta), has designs to marry her needy patient. She just needs to convince him he's healthy enough first.

There is another engagement in the offing at the ranch. The owner's daughter, Sally (Eleanor Hunt), is set to marry the Sheriff (Jack Rutherford), though her heart really belongs to the unfortunately named Wanenis (Paul Gregory), who is part of the local Native American community, having been the child of a mixed marriage. This racial difference is the only thing standing in their way, and despite how the love triangle resolves, it seems fairly progressive for the era--particularly considering how the other Native Americans are portrayed and that there's a blackface routine in the movie's third act. (Though, to be fair, Cantor avoids playing it as racist caricature, and the make-up is actually the result of a Looney Tunes-style explosion rather than an attempt to play "black." For whatever that's worth)

The story takes off at the same time Sally does. She leaves with Henry, telling him he's driving her to the chapel but leaving a note for everyone else saying she is eloping with the city slicker. Naturally, the Sheriff doesn't take kindly to being jilted this way, and he leads a posse in pursuit. 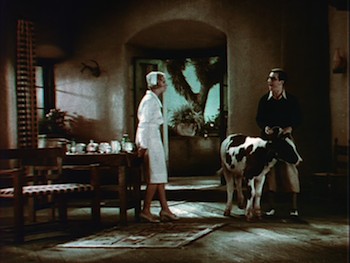 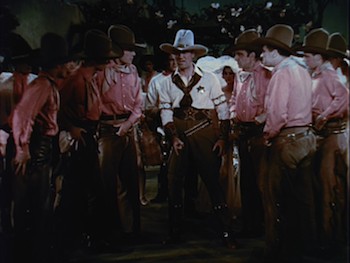 Whoopee! was directed by Thornton Freeland, perhaps best known for the Paul Robeson vehicle Jericho and Fred Astaire's Flying Down to Rio. This was only his third directorial effort, and the inexperience shows. Like a lot of early stage-to-screen adaptations, Whoopee! suffers from being too theatrical. Most of the film is shot straight ahead, with the camera set up in the middle distance and the actors moving in and out the frame as action dictates. This isn't so great when, say, there is a musical number, and can also be a little dull during the long stretches of dialogue. The only person in whose favor Freeland's static style works is Cantor, who remains the sole focus during several great skits that punctuate the film's love-on-the-run narrative.

Most of my experience with Eddie Cantor comes from his appearance as a recurring character on HBO's Boardwalk Empire. Much of my desire to see Whoopee! was to see what the actor was really like when doing his shtick (and to gauge the quality of Stephen DeRosa's performance on the show; he's pretty damn good). Cantor strikes me as an early Woody Allen prototype, with his Jewish neuroses and baffled reactions to everything and everyone around him. His patter is funny, as is his physical comedy, but it's when he sings that his stardom starts to make particular sense. He just has a way about him when he's performing. A lot of it has to do with his trademark eye rolls. The naughty innuendo of the Gus Kahn and Walter Donaldson-penned tunes are given a little added kick by his knowing facial expressions.

Sure there are downsides to Whoopee!'s old-fashioned design, but these can also work in the movie's favor. There is a charm to classic Broadway and vaudeville that is undeniable. Cinephiles will also likely enjoy seeing this early two-strip Technicolor effort. The process gives the film an almost painterly, pastel look. Folks might also be curious to know that this is the first appearance of the Goldwyn Girls, MGM's stock dance company, which at the time featured Betty Grable, Ann Sothern, and Paulette Goddard, pre-stardom. 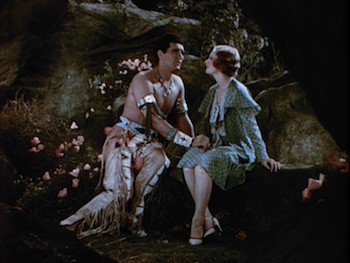 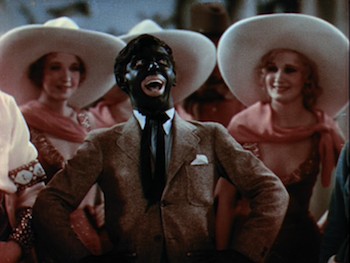 Video:
Whoopee! comes to DVD via the Warner Archive's manufacture-on-demand program, and though the movie could really stand to receive a massive restoration effort, the original materials used for this transfer are pretty good given the product's age and the outdated way in which the film was processed. You will notice some marks on the print, particularly scratches in the background and also some shimmer around the edges of the frame. The most noticeable problem, though, is the color strips regularly go out of register. While some scenes have an astonishing clarity, others suffer from an aliasing effect.

Sound:
The original mono soundtrack is remixed nicely, with warm tones and an impressive lack of hiss, noise, or dropouts.

FINAL THOUGHTS:
Highly Recommended. Yeah, sure, Whoopee! can drag a little, and some of its less-sensitive racial humor is out of date, but overall, the film is both fun and historically significant. Eddie Cantor is a wonderful comic performer, and he has quite a few funny bits here. The music is also excellent. 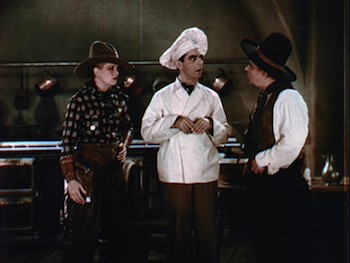 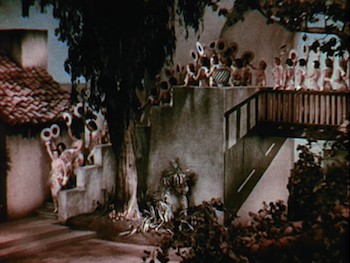