Samuel Fuller's 1969 film Shark (with the exclamation point on the end on the cover, but not in the actual film) is certainly a case of a movie being different from what one would be led to expect it as. Besides the title being Shark!, the tagline on the front cover of this Blu-Ray, which I've heard was lifted from the movie's original advertising, is "It will tear you apart!" The front cover picture also includes a picture of a sunken ship with no fewer than 11 sharks swimming around it. After the opening credits, the film even displays this dedication: 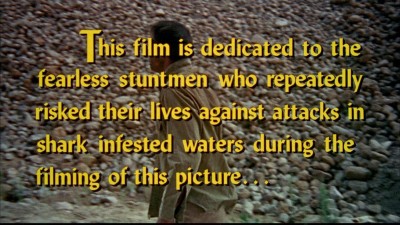 Based on all of this, one would expect to see some serious underwater shark action in this movie, right? Well, not quite. Shark has a rather enticing opening, where we see a diver exploring around a sunken ship at the bottom of the ocean, when he has to suddenly drop what he's doing and head back to the surface when a shark comes along. There's a struggle, but the diver ultimately doesn't make it, though we're not too shaken by this given the movie has just started and thus never really knew this character anyways. We're then taken to a small Sudanese city (which a character later describes as an "isolated pigsty") where we meet Professor Mallare (Barry Sullivan) and his assistant Anna (Silvia Pinal), apologizing to the mother of the killed diver but soon afterwards discussing the need to find someone to take his place, as they've been leading the search of the sunken ship for onboard treasure.

We then see American gunrunner Caine, played by pre-superstar Burt Reynolds, driving a truck in a rather isolated area until being stopped by the police at a primitive roadblock. They search his truck and aren't too pleased to find him carrying guns and explosives, so Caine takes off with the police chasing him. He throws a lit stick of dynamite out the window at them which at least brings them to a halt, and is then forced to jump from his truck after realizing he's lost control of it. After wandering a bit, he hitches a ride and is brought to the city we saw previously and checks into the hotel there. He spends a bit of time there, as the authorities don't want him to leave right away (for reasons that aren't made entirely clear) and is spotted by the Professor and Anna as a suitable replacement diver. When Caine hears about the gig he remarks to his new drinking buddy "Doc" (Arthur Kennedy) "I'm gonna get that job even if I have to romance that broad," and the film immediately cuts to the Professor expressing some doubt about Caine to which Anna replies "You have nothing to worry about, even if I have to romance him just to hire him." And romancing they do- mostly hanging out by the beach and sharing cigarettes. Soon, Caine heads out to sea with her and the Professor to continue their efforts to search the ship at the bottom, but of course also have to contend with those pesky sharks (though there aren't nearly as many as the cover picture would have us expect). 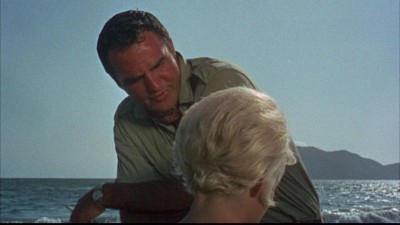 The problem with this movie is that it takes a long time for it to get where it's going (though it only runs 93 minutes altogether). Most of the scenes take place in the city, with lots of talking going on. The accents make much of the dialogue hard to understand, with some of it even being spoken in the native language without giving us English-speakers the benefit of subtitle translations. Still, the play between Caine and Anna is fun to watch, and there's an amusing subplot with a kleptomaniac boy running around town.

From the info I looked up about this movie, it has a troubled history. A stuntman was actually killed by a shark during production, and the producers interfered so much with the film that Samuel Fuller sought to have his name taken off of it but was unable to (although the same year's Death of a Gunfighter resulted in the first "Alan Smithee" directorial credit, a pseudonym used for many years when the real director wanted his name removed.) 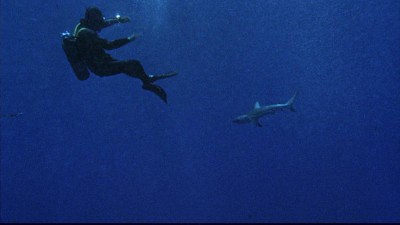 Presented in a full 16x9 ratio, Shark looks to have been transferred from a good-quality master. The color seems a bit faded in some scenes, but likely this was how it looked originally. There are no signs of excessive digital clean-up nor compression artifacts, though critical viewers will notice some aliasing in a few scenes (particularly in the fine stripes of some actors' clothes). 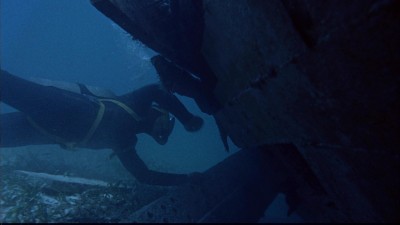 The mono audio track is in 1-channel DTS-HD Master Audio, and sounds adequate enough with no excessive noise or distortion. Much of the dialogue has an apparent quality to it of being ADR'd in post-production rather than recorded live (while many movies do this, most don't make this obvious.)

There are no extras on this disc to speak of. Shark had been previously released on DVD by Troma, which included some extras on Samuel Fuller and the history of this movie. 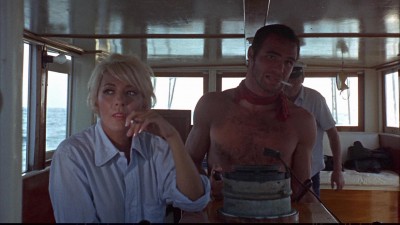 Shark has many qualities of a mediocre film and will certainly disappoint those who judge a movie by its cover, but nevertheless it has its moments and is interesting to see Burt Reynolds before he hit the big time. Knowing of its history beforehand may make viewers a bit more forgiving of its shortcomings. Regardless, it's good to see Olive Films release this hi-def transfer on Blu-Ray.