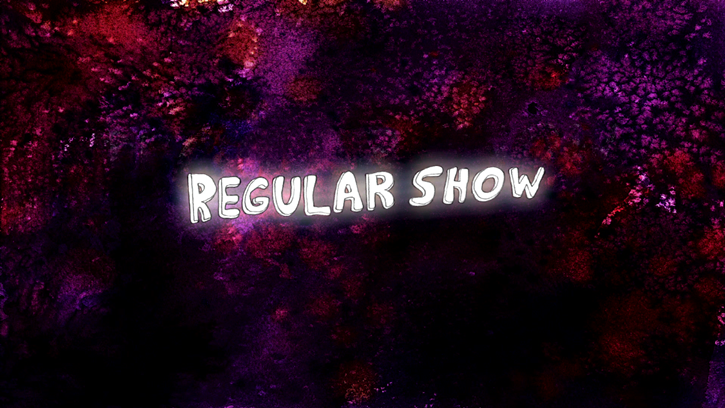 Regular Show is an animated cartoon series that was created for the Cartoon Network. It debuted back in September 2010 and is now making its Blu-ray debut with a set that comprises the first 2 seasons of the show. Created from J.G. Quintel, the show is known for having an offbeat sense of humor with a lot of randomness that makes its title both peculiar and hilarious. The show is currently airing its fourth season and it's become one of the network's most successful shows.

Each episode revolves around the main characters Mordecai and Rigby. These are goofy-natured characters (frequently referred to by others as "slackers") who are close friends who tend to do a ton of things together -- pretty much everything they do is done together.

Mordecai is actually a giant Blue Jay bird and Rigby is some kind of raccoon. Both are employed as groundskeepers but they spend most of the time at their job messing up and making things become more complicated for everyone else. Somehow, comedic hilarity tends to ensue as a result.

In most of the episodes they tend to mess up a massively simply task in some bizarre fashion. In one episode, another character becomes transported to the moon because of them, in another episode they end up unleashing a big, menacing video-game with lasers when they were supposed to set up chairs, and in another episode they pretend to be astronauts before it essentially almost leads to the destruction of the entire world. This is pretty much how everything happens on the show. 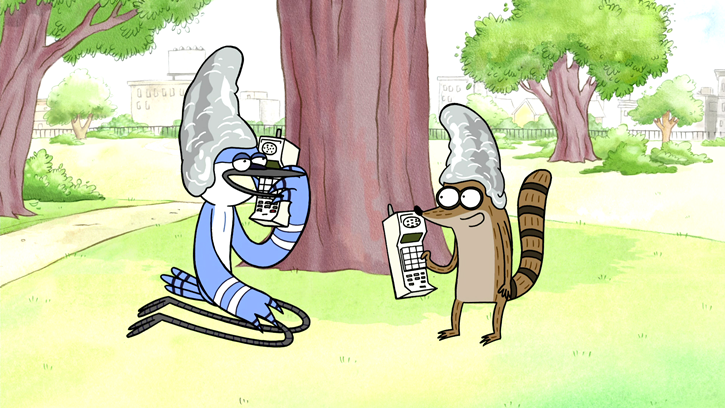 The rest of the cast of characters consists of Pops, a friendly oddball who gives out lollipops as payment, the park manager Benson, a walking gum-ball machine, Skips, a yeti-groundskeeper who frequently helps to save everyone, and Mitch, an oddball who often makes a "My Mom!" joke, which never makes much sense to anyone. There are several other supporting characters who appear over the course of the show's seasons, including Margaret, a Red Robin for which Mordecai has a huge crush on.

The offbeat humor of the series is the greatest strength of Regular Show. This isn't a series with some kind of major continuation in storytelling. It's a classic example of a well done animated program which focuses on different comedic scenarios in each episode and upon the likability these characters have to bring some solid laughs to audiences.  It reminds me of some of the classic cartoons produced by the Cartoon Network as well as some of the humor found in a number of old-school Looney Tunes cartoons. The comedy is based around these characters, which is one of the reasons the show works so well. The way in which the show's creator has crafted these unique goofballs makes for a good animated effort.

Lots of references are made to pop-culture elements, but most of these moments are actually based in the eighties. It's an interesting creative direction for the show and it helps to lend it something rare and special as a quality-show that wants to be enjoyed by animation fans of different age groups, including those in their twenties and thirties.

Cartoon Network found animated gold with Regular Show, which is too offbeat and unique to be called regular. It's anything but that. This is a jolt of creativity the network greatly needed and it's something that will hopefully run for several more seasons. This is a sweet-natured series overall and the characters are the main element of its goofy charming nature which keeps things fun and interesting for the series jubilant fan-base. Regular Show is a comedic animated gem worthy of being discovered for years to come. 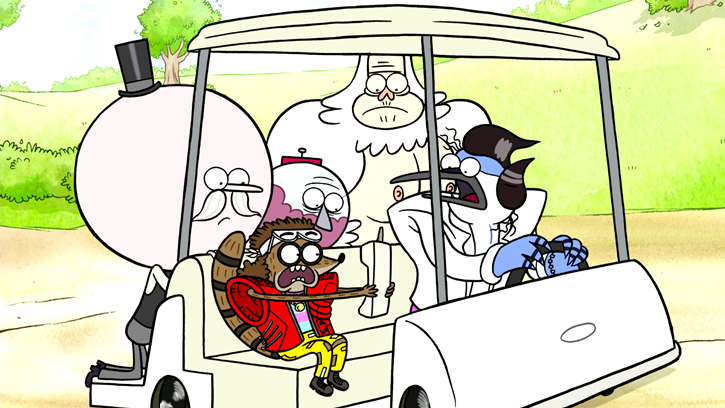 Regular Show arrives on Blu-ray with a 1.78:1 widescreen 1080p High Definition presentation that is generally quite pleasing and impressive. Colors certainly seem to 'pop' in HD and are a huge factor in the series success -- the animation is impressive and really helps to define this series and it's offbeat characters, so it's nice that a strong encode with healthy bit-rates was a factor of the series high definition debut. Detail and sharpness are both notable as well. The presentation shouldn't disappoint fans of the series.

The back of the packaging states that this release includes Dolby TrueHD lossless 5.1 surround sound audio for the episodes. Unfortunately, the only audio option actually included during the main presentation of the show is Dolby Digital 2.0 audio which is neither in surround sound or something that preserves the show as well as would have been possible with a lossless encode.

While the 2.0 isn't a total slouch (it does offer decent dimensionality for a front-channels only mix) the audio isn't exactly something that impressive either. It still works for the show well enough but it is a bit of a disappointing element of this release and it continues Warner Bros routine releasing of titles with lossy audio while promoting high-def audio on the packaging. Fans will be annoyed by this aspect of the release, but the audio is at least in acceptable (if underwhelming) quality. 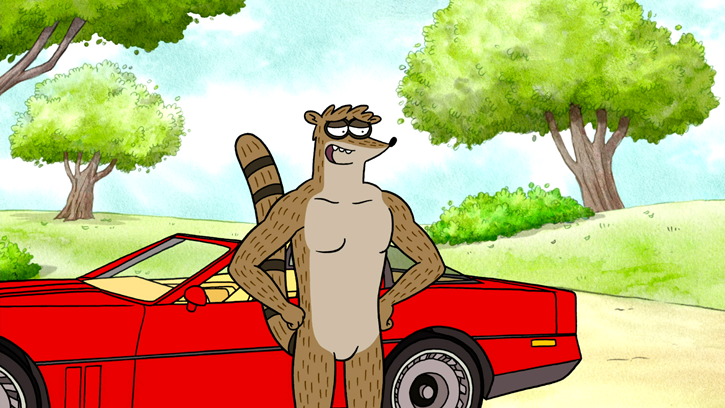 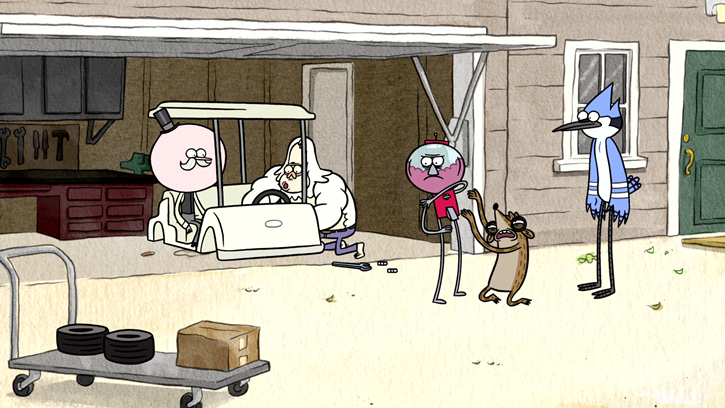 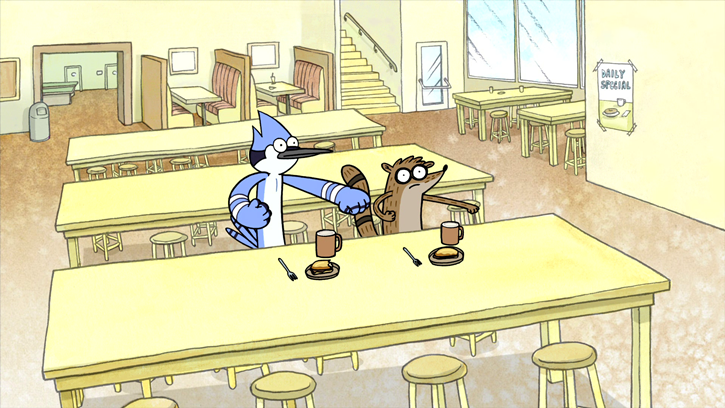 Regular Show arrives on Blu-ray with a surprising amount of supplemental materials. Included on the set (as spread across the two separate Blu-ray discs) is the following:

The Unaired Regular Show Pilot (8 min. HD), which is in the same vein of the show that would follow its production order. This pilot isn't quite on par with the quality of the actual show with regards to the animation quality but the comedy and spirit of the show remains essentially the same and it's something that will be of high interest to big fans. It's like getting another bonus episode of the show.

Animatic for "The Power" (11 min.) shows the early sketch-work done outlining the episode.

Original Pencil Tests from Saerom (38 sec.) is some early test animation for an episode of the show.

CG Test for Hodgepodge Monster (4 sec.) is a brief snippet of a test CG animation for one of Regular Show's monster characters.

2010 Comic-Con Teaser Trailer (2:35) plays out like a "best of" clip-show featuring several of Regular Show's best season one moments. It's a hilarious clip-show that was presented before this series actually premiered.

"The Naive Man from Lolliland" Student Short (4 min. 8 sec.) is an amazing student short film showcasing the Pops character's introduction and his first use of lollipops as payment. This is a surprisingly strong student film that showcases how amazing series creator J.G. Quintel was as an animation student and the character is truly hilarious in this amazingly creative short student effort.

Sam Sings Mystery Karaoke (2 min.) is quite bizarre as a supplement. Basically, it's of one of the main series voice-actors doing karaoke to some unknown song that includes a lot of swear words (which has caused Cartoon Network and Warner Bros to bleep out the entire piece -- it's all silent and bleeped so you have no idea what he's saying or singing to).  Weird.

Party Tonight Music Video (2 min. 6 sec.) is a campy and heartfelt live-action music video for the "Party Tonight" segment from season one. It's sort of like a short film version of Regular Show with actual people in the parts of the characters, with cool costumes, and great design.

JG Pitches "The Power" (16 min. 32 sec.) is one of the coolest supplemental features that has been included on the entire release. In this hilarious and insightful piece, Regular Show series creator  JG Quintel does a version of his episode pitch for Season One's episode "The Power", which became the first episode of the series. He offers voices for the characters and his great enthusiasm for his illustrations and jokes make this a special blast of energy, demonstrating immense effort on his part to pitch the show to others.

Original Regular Show Commercials -  With this selectable extra, there are two short animated pieces that play (of less than a minute long each) which are original promotional pieces for the series. 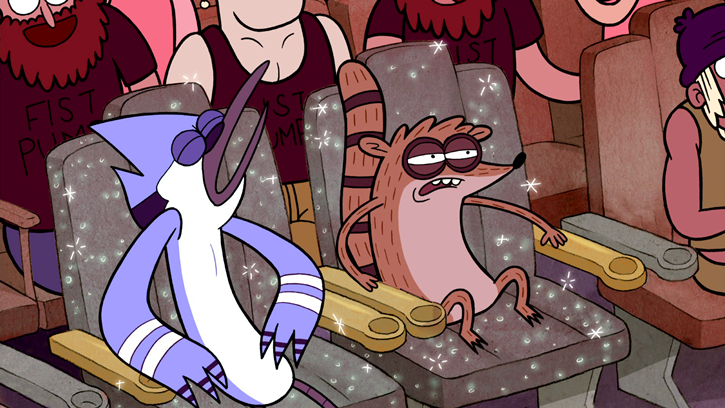 Regular Show is one of Cartoon Network's most zany and original animated series in years. It's something that harkens back to the Cartoon-Cartoon days of the network, and the greatest years the network had with shows like The Powerpuff Girls, Dexter's Laboratory, and Johnny Bravo.

The comedy style seems to be a bit of a blend between Adult Swim productions (with humor that seems aimed at a slightly older audience) and traditional Cartoon Network shows. This is a great series for audiences of all age, but it will be most enjoyed by twenty to thirty-something people who still love cartoons. This is one truly awesome cartoon with a lot of good humor to enjoy.