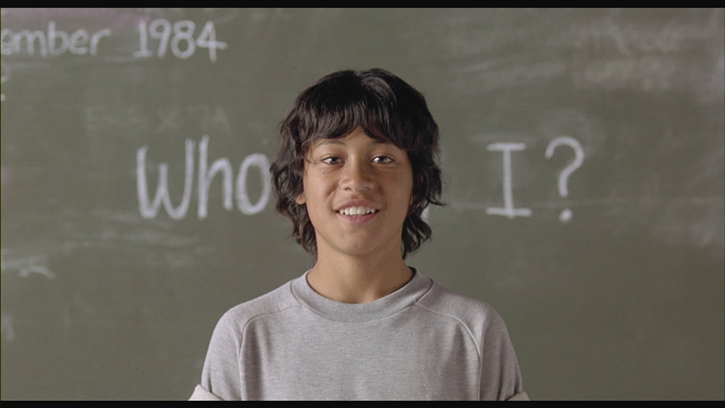 It's been several years since writer/director Taika Waititi's Boy debuted to audiences with great results at film-festivals such as Sundance and others and with a lot of love passed on to it with indie-film fans discovering the effort to some degree of fandom, even within the United States (where the film was not available with a Region 1 DVD edition). Kino Lorber is now bringing North Americans audiences (who hadn't discovered the New Zealand indie favorite yet) a cool opportunity to see the film on either Blu-ray or DVD for the first time, and this comedic drama painting its portrait as a coming-of-age tale and as a story of undelivered expectations will find an even wider audience of fans.

The story of the film takes place in 1984 and it all occurs in New Zealand's Waihau Bay region, which feels surprisingly similar to a lot of small-town areas of America in spirit, both with the way the environmental landscapes look (which are reminiscent of Texas town's) to the natural child-like wonderment the main young characters display. Boy (James Rolleston) is the lead character; he's a creative, smart, and good-natured kid but he doesn't do perfectly in school. Teachers and those around him see his potential, though. He also has a kind young brother, Rocky (Te Aho Aho Eketone-Whitu), who is always drawing illustrations and imaging an increasingly strong ability to move things and have an impact on others with his "powers", something which represents his own over-active imagination.

Both Boy and Rocky lost their mother when they were quite young, and an early scene in the film shows a visit they make to their mother's grave, who died in her early twenties. As this storyline progresses, we meet their father Alamein (Taika Waititi, who wrote and directed) , someone who has been distant and largely uninvolved in their lives following his arrest. It doesn't take long for Alamein to begin searching for stolen money and looking for drugs; unfortunately, he doesn't seem to spend as much time with Boy or Rocky as they should absolutely receive. Boy spends most of his time fantasizing or idolizing his father in an incredibly spectacular fashion (drawing upon Boy's giant fandom of Michael Jackson). Meanwhile, Rocky spends most of his time alone at the beach and with his sketches. 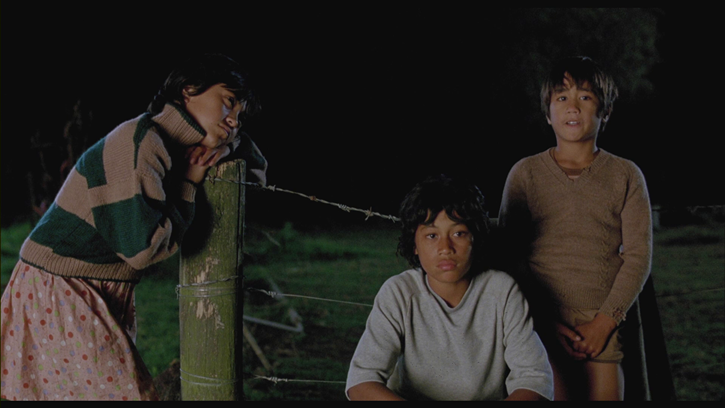 As the film begins to explore the characters, we see that Boy's father is something of an immature boy on his own. He tries to bond and spend time with his kids but his places a significantly greater importance on finding stolen money, smoking weed, and being in an unsuccessful three-person gang called the "Crazy Horses" more than he does connecting emotionally with his children; children who grew up for years without their dad or mom (because of her death and his absence in prison). Yet Boy looks up to his dad and wants somehow to be like him with his idyllic vision of a father with dance moves rivaling his superstar idol Michael Jackson with total synchronicity.

Perhaps, however, Boy will eventually be able to grasp and understand his own place in his world and how he doesn't necessarily want to be the same person that his father is: and that, actually, Boy's got his own pool of potential. It's a main theme explored within this strange,  interesting, and original coming-of-age story and family drama from Waititi (Eagle Versus Shark, episodes of Flight of the Conchords).

One of the things that is wholly original and enjoyable about this story is found within the deadpan humor and offbeat style that film exudes from beginning to end. This isn't quite a ordinary comedy or drama. It's absolutely a unique voice that is being heard through these journeys of storytelling explored. The characters are interesting and the lead character Boy provides audiences with an interesting and relatable character that is dealing with issues of family that are probably somewhat relatable for a lot of people, if not necessarily in exactly similar ways or degrees. This is a story that should connect to a lot of people because it's a universal story about growing up and coming to terms with difficult family issues -- this is something that  makes the film stand out as a successful venture because not a lot of films actually even attempt to delve into these realms in the way Boy does.

If the actual film wasn't exactly what I was anticipating or expecting as an audience member, it's largely because I was so delighted from Waititi's debut feature and it's romanticism and comedic charm and that I was surprised with how darkly comedic and sad his follow-up feature is overall. Boy doesn't simply aim to make you laugh and smile. It's a pretty dark story and one which will raise some interesting points in life along the way. The actors (which was largely comprised of young children) did a great job throughout the entire film, and I was impressed by how well it worked on the whole. Waititi did a good job stylistically and emotionally, and this is a good reason to check out the film. It didn't win me over as much as I was anticipating, but for an entirely inventive and different comedic-drama this is one effort that succeeds more than anything else. Fans of quirky indie movies should most certainly consider giving it a go: something tells me many people will wind up cherishing the film. 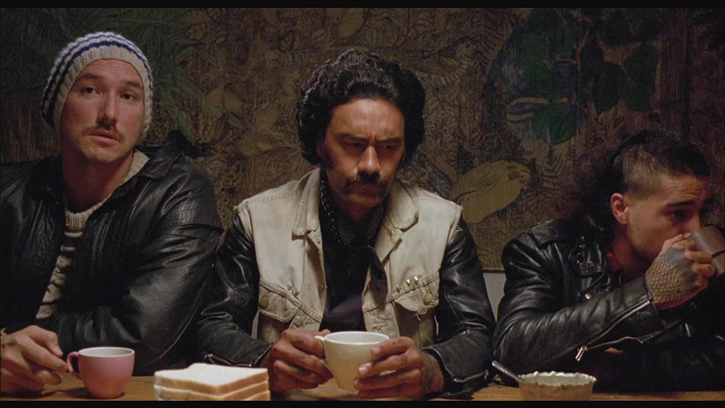 Boy arrives on Blu-ray with a 1.85:1 1080p transfer. It's actually not that impressive of a high definition debut though. The colors aren't that impressive, the image is somewhat soft, and it doesn't have the kind of depth or clarity that would make it a better transfer overall. Most of these imperfections are likely source-related. The image isn't terrible but it's underwhelming. Even the amount of film grain present is a bit disappointing. While it means the image isn't suffering from unnecessary DNR it also didn't exactly add to the overall presentation.

The back of the case only mentions a stereo audio track but the release actually includes a 5.1 DTS-HD Master Audio presentation. It isn't one of the best sound presentations I've heard. It does a better job than expected for a low-budget indie, though. Music is clean and clear and dialogue is easy to understand. Some surround usage is impressive, but this was still mostly front-heavy as a sound mix. 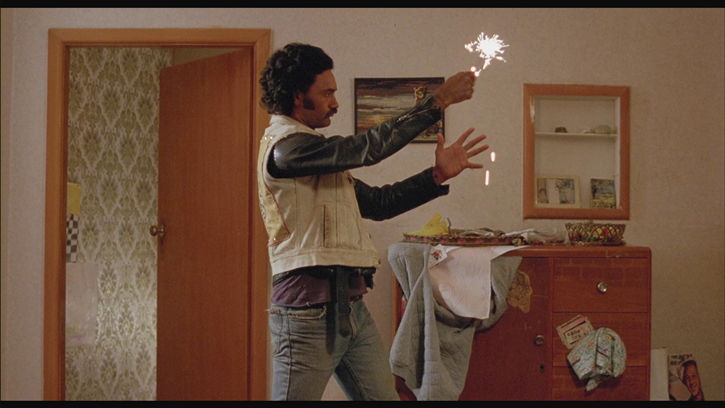 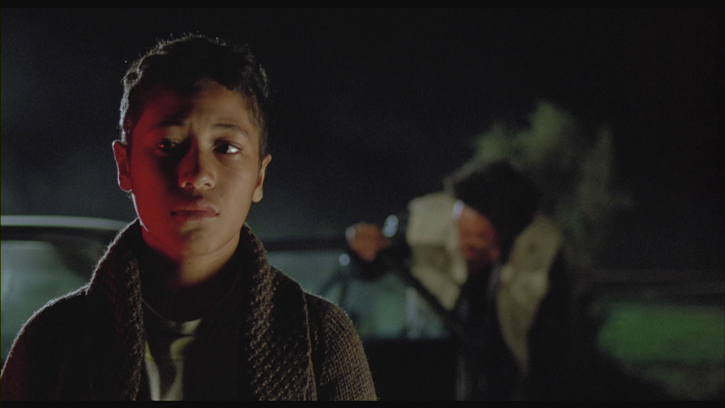 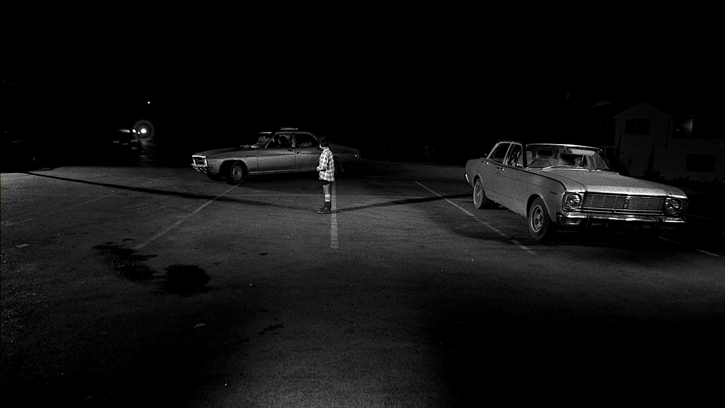 Screenshot from the short film "Two Cars, One Night"

This release contains a couple of worthwhile supplements. First of all, it includes the Academy Award nominated short film by Taika Waititi "Two Cars, One Night", which tells a story of a couple of children connecting across from each other in separate cars while their parents are inside of a bar drinking. It's a strange, goofy, and comedic short film piece with some nice dramatic elements. It is presented in 1080p High Definition. 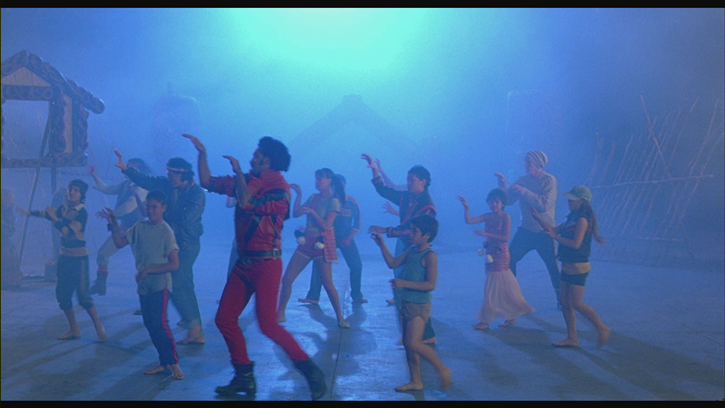 Boy is a charming indie movie that is both funny and emotionally challenging. I wasn't really thrilled with it to the same degree many audience members have been (this IS a festival and audience award winning favorite) but I thought it was an original, worthwhile, and smartly crafted effort nonetheless. It's worth checking out for anyone who enjoys genuine original storytelling. The Blu-ray PQ/AQ is merely average but there are some good supplements. Overall, this is a better release than the DVD and it's a worthy purchase for fans.