- from Another Beatles Christmas Record

Revisiting A Hard Day's Night (1964) and Help! (1965) on Blu-ray format almost back-to-back, mere days apart, proved for me that, in this case, conventional wisdom is true. The first Beatles movie, in black-and-white and shot in a faux-documentary style with self-parodying humor and innovative stylistic flourishes, has a freshness and incredible vibrant energy sometimes lacking in Help!. Conversely, Help! greatly expands upon the visual style introduced in A Hard Day's Night (and, before that, in the Lester-Peter Sellers short The Running Jumping & Standing Film). Gorgeously photographed by David Watkin (The Boy Friend, Chariots of Fire) in Eastman Color, it's an even bigger feast for the eyes while Lester's brand of sardonic humor, a Pop Art fan's fantasy of Beatles life, is even funnier than the previous film.

The Blu-ray, courtesy Apple and Universal Music, is great in some respects, very problematic in others. The 5.1 audio, remixed from its original mono, is stupendous, while the video transfer, much of the time, is impressively sharp with the primary color palette in particular all but popping off the screen. Unfortunately, in medium shots especially, there's some pretty egregious edge enhancement and/or ringing issues that prove a major, almost headache-inducing distraction. Ironically, these issues probably could easily have been avoided. Extras are plentiful but apparently all ported over from the film's 2007 DVD release. 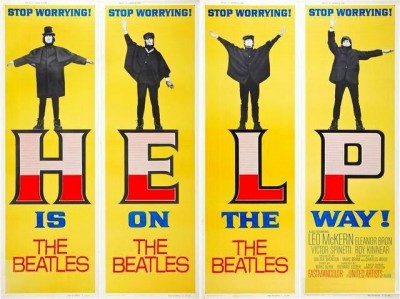 Comically styled after The Goon Show while parodying ‘60s popular culture, with direct references to James Bond and Hammer Film's Stranglers of Bombay, Help! opens with a pre-titles segment: a Thuggee-type Asian cult suddenly halts the sacrifice of a virgin to the goddess Kali when it's discovered she's no longer wearing the sacred sacrificial ring. Footage of The Beatles, the cult apparently in possession of such footage and a handy 16mm projector, reveals the ring now resides (and is permanently stuck on) Ringo's finger, the sacred ring somehow a gift included in one of his fan letters.

The cult's leader, Swami Clang (Rumpole of the Bailey's Leo McKern) and high priestess Ahme (very sexy Eleanor Bron, Two for the Road) travel to London, determined to get the ring back even if it means losing Ringo's finger to a buzz saw.

What follows could be described as the The Running Jumping & Singing Film. With jokes. Ringo: "They have to paint me red before they chop me. It's a different religion from ours… I think." And:

The cast, which include Richard Lester stock company regulars like Roy Kinnear and Victor Spinetti (also in A Hard Day's Night), as a crackpot scientist and his assistant, have a field day with their material, enhancing it greatly with their amused performances. Irreplaceable Leo McKern, normally an acclaimed character actor of serious drama, seems delighted playing such an extraordinarily silly villain.

The already exciting, even joyous viewing experience peaks during the film's seven songs: "Help!" "You're Going to Lose That Girl," "You've Got to Hide Your Love Away," "Ticket to Ride," "The Night Before," "I Need You," and "Another Girl." Each really "pops" and is stylistically unique from the others. The larger budget, about $1.5 million and quite big for this sort of film, allowed for location shooting that included the Austrian Alps and the Bahamas. "Ticket to Ride," gorgeously photographed with the Beatles clowning in the snowy mountains, is a highlight. Some may quibble the original mono versions heard in the film have been replaced by the stereo album counterparts, but this reviewer believes this decision works marvelously well.

As noted above, the 1.66:1 format, all-region Help! has in its favor stupendously beautiful color, the bright primary reds and blues and greens looking just marvelous. In close-ups especially the image also looks really sharp. However, the edge enhancement (or whatever it is) is nakedly apparent in medium shots, with multiple, ghost-like lines appearing wherever there's any hard kind of edge or line. I suspect this is the result of a combination older transfer (likely dating from the 2007 DVD release) and an attempt to tweak Help! into resembling a brand-new new movie rather than other British Eastman Color/1.66:1 productions nearly a half-century old, while retaining the original color scheme. The effect is distracting at times and my guess is that it easily could have and should have been corrected before the Blu-ray was released. Conversely the remixed-for-stereo audio, in both 5.1 DTS-HD Master Audio and 2.0 LPCM format, along with standard Dolby Digital 5.1, is superb. Nine subtitle options are offered: English SDH, French, Portuguese, Spanish, German, Brazilian Portuguese, Latin American Spanish, Italian, and Dutch. These same subtitles are carried over into all the special features.

Ported over from the 2007 DVD release are the featurettes "The Beatles in Help!," "Memories of Help!," and "A Missing Scene." Also included are three theatrical trailers and, pointlessly hidden in the menu screens (but noted on the packaging), original 1965 radio spots. A 16-page full-color booklet features a brief introduction by Lester and an appreciation by director Martin Scorsese.

Help! is one of the great films of the 1960s. Though the term is overused, it really is a feast for the senses. This new Blu-ray certainly achieves that in the audio department though falls short in terms of the video transfer. Still, Highly Recommended.