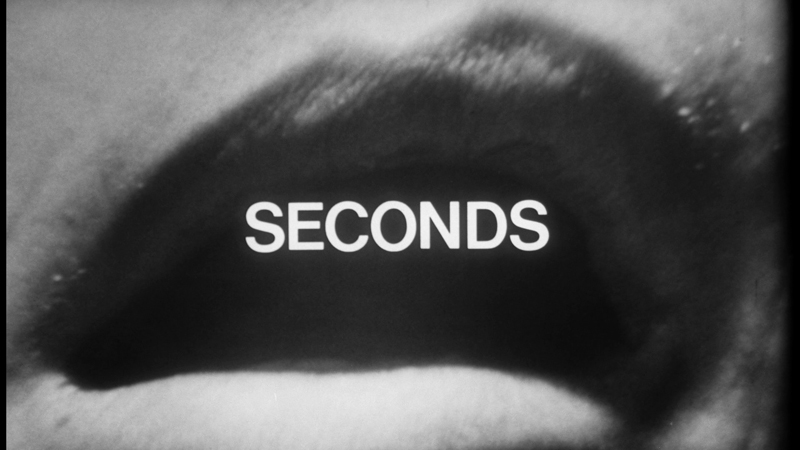 
The Movie
With its black and white visuals, sci-fi-tinged story and themes of morality, it's easy to mistake Seconds for a supersized episode of The Twilight Zone. However it's not, and it's a bit odd to think that director John Frankenheimer never led an episode of that classic series, considering his role in classic TV, his obvious interest in the subject matter and his professional relationship with Rod Serling. Instead, among many other films in a long, respected career, Frankenheimer gave us three classic tales of paranoia in The Manchurian Candidate, Seven Days in May, and, the least-known of the trio, Seconds, an adaptation of David Ely's novel about a man stuck in a dead-end life given a second chance to live happy, He may as well have been given a monkey's paw though.

Arthur is by all accounts a successful man: a bank executive with a beautiful house in Westchester County, NY, married with a wife and daughter. But he's unsatisfied with his quiet life, and when he receives a call from an old friend offering him the chance to start over with a new life, he takes the opportunity, despite some previous obvious warning signs that the people offering him this chance may not be society's finest citizens. Whereas many movies might want to get right to the switch, Frankenheimer's film lets us spend almost half the film with Arthur, living in his world and experiencing the shady underworld he descends into to get his fresh start. It was a smart move, as understanding who Arthur is makes the rest of his tale really work. The film spends long stretches in scenes that extend far beyond the boundaries most films would attempt, risking becoming static at times, but they do serve to place the audience into the same situations as Arthur, trapping them in the his ennui. Is it necessary? Probably not, and certainly not as often as it happens here. 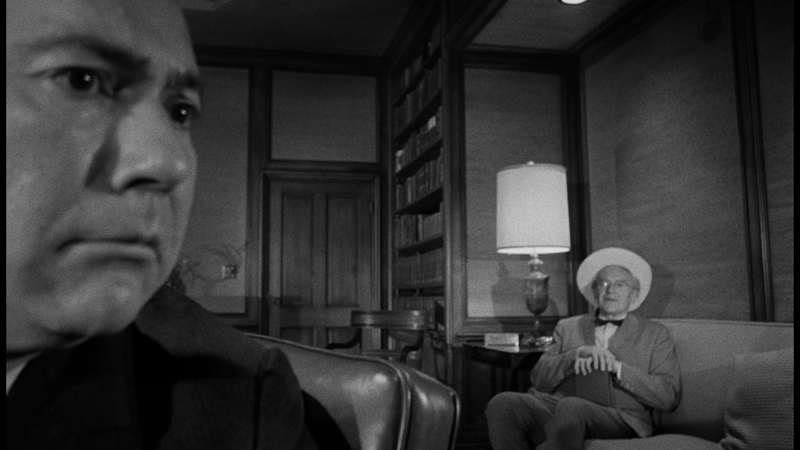 Once Arthur emerges from the process, a disturbing sequence accomplished by Frankenheimer and his team filming actual surgeries, we meet Tony Wilson, played by Rock Hudson. Though familiar with his work in romances with Doris Day, like Pillow Talk, and his films with Douglas Sirk, Hudson is more on my radar for the circumstances of his death and the salacious stories about his homosexuality. This is likely the case for many filmgoers younger than myself, so to see his work here in Seconds is eye-opening. Easily bolder and more engaging than anything I've seen him in before, Hudson is a revelation, playing the part of an older man with a younger body to perfection, while portraying Tony's growing fear and panic about his situation with manic gusto. When he truly realizes what he has gotten himself into and what he is up against, his primal reaction is shocking.

Building to a disturbing ending that's foreshadowed subtly along the way, Frankenheimer, collaborating with cinematographer James Wong Howe, creates a tone of creeping darkness, of a man slowly losing control to forces he doesn't understand. Utilizing experimental techniques and a range of cinematic tools, the filmmakers here achieved a look and feel that wouldn't break into the mainstream for many years to come, and which expressed much of the film's story without saying a word. From the start, thanks to a disjointed title sequence by the legendary Saul Bass, the film seeks to discomfort the viewer with extreme close-ups, distorted imagery and masterfully composed frames that make you realize something is not right. As interesting as the story is and as powerful as Hudson's performance is, this movie is mostly about the visuals, a fact established at a drunken grape-stomping party, as the camera stumbles between naked bodies and laughing faces, a documentarian eyewitness to a happening that unsettles Wilson, who's young on the surface but still aged inside. 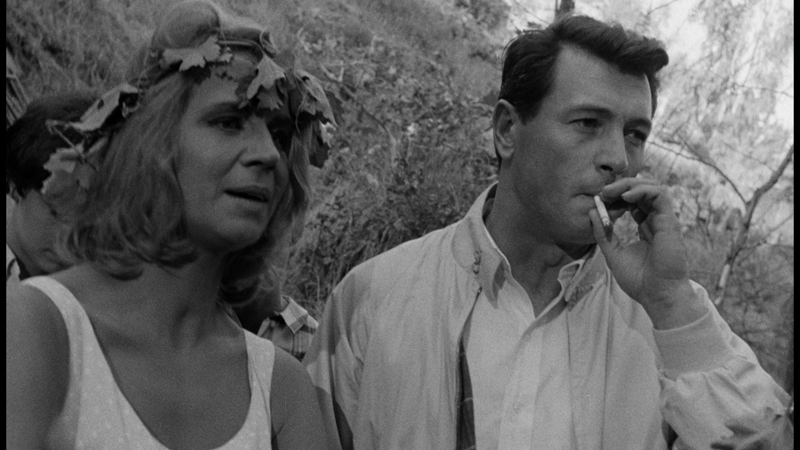 The Disc
Seconds arrives on one Blu-Ray disc, in Criterion's standard clear keepcase, with an simple, yet beautiful two-sided cover and an 18-page booklet. The disc, with that great Criterion standard menu, offers the option to watch the film, navigate the timeline, select chapters and check out the extras. There are no audio options but English SDH subtitles are available.

The Quality
Though during his commentary, Frankenheimer refers to a 1.66:1 aspect ratio (likely referencing to the previous DVD release's presentation) this movie is delivered with a 1.75:1 transfer that's experienced an extensive 2K clean-up, off a 4K digital transfer created from the original camera negative. The black and white image is gorgeously clean, offering up plenty of fine detail, though there are some minor particles in the title sequences. There doesn't look to be any issues with digital distraction, but some occasional jitter can be spotted (along with some brief noise in flatter areas of the screen.) Overall, you probably couldn't ask for more from this presentation, which captures Howe's gorgeous lighting schemes excellently.

Presented as an era-appropriate LPCM 1.0 track, the audio in this film is crisp and powerful, with a wonderfully layered track that's remarkably clean. The mix of Jerry Goldsmith's tense, mood-setting score and the highly-legible dialogue (which is. at times a bit awkward thanks to hefty ADR work) makes for an affecting soundtrack that's free of distortion. At one point, the sound of children playing is subtlely blended into the mix, and it seemed like they were from just outside it was so natural.

The Extras
Kicking off the bonus content here is a 1997 audio commentary by the late Frankenheimer, carried over from a previous DVD release. The director has plenty of technical detail about the film's production, with a special focus on lens used, while also touching on the many actors who had previously been blacklisted, the work of DP James Wong Howe, the effect of not having a costume designer and what it takes to shoot an orgy. Though Frankenheimer falls silent in several parts, especially late in the game, he shares more than enough info overall to make the track worth a listen.

An unexpected guest makes an appearance in the newly-created "Alec Baldwin on Seconds" (14:21), as the actor, who worked with the director on Path to War, discusses his respect for the man and his relationship with actors, tells a story about Frankenheimer and his fingers and praises Seconds, one of his favorite films. Baldwin is always wonderful to listen to, but he does a great job discussing both the man and his movie.

More interviews about Seconds are available in the 18:37 "A Second Look," which features interviews with Frankenheimer's widow Evans and actress Jens. The two women cover a wide swath of topics related to the film, including technical notes, info about what didn't end up on-screen (like Laurence Olivier, Leonard Nimoy and baby abuse), the film's reception and legacy as well as Jens' issues with the nudity in the bacchanal. It's an engaging addition to the extras, offering more that just reminiscing.

"Palmer and Pomerance on Seconds" (12:38) is a visual essay (voice-over on stills and clips) by film scholars R. Barton Palmer of Clemson University and Ryerson University's Murray Pomerance. It's a very academic entry, and Palmer isn't the most energetic narrator (basically the text of the essay is just being read clearly), but the examination of the film's themes, including the existential crises of middle-aged man, and what Seconds represents of Frankheimer's style, is interesting enough for fans of film studies.

Wrapping up the extras are a pair of archival clips. Up first is a 1971 interview with Frankenheimer broadcast on Canadian television (10:26), Shot in a moody, dimly-lit manner, the interview lets Frankenheimer roll, talking about his influences, his thoughts on criticism and other observations on directing movies. It's easily one of the more frank and interesting interviews done by a popular director. The other piece, "Hollywood on Hudson (4:18), is an excerpt from a local New York news special shot on the Scarsdale set of Seconds. Powered mainly via voiceover from an interview with Hudson, it's a quick, breezy look at the on-location shoot, like you'd expect from local news, offering mainly nostalgia,

Missing here from the 2002 Paramount DVD release is the film's theatrical trailer.

The 18-page booklet that accompanies the disc has several intriguing stills from the set of Seconds, along with details about the release and "Reborn Again," an essay by David Sterritt, chairman of the National Society of Film Critics. Though a tad obvious in spots, it does a good job of putting the film in the context of Frankenheimer's career and reviews several of the film's core themes. 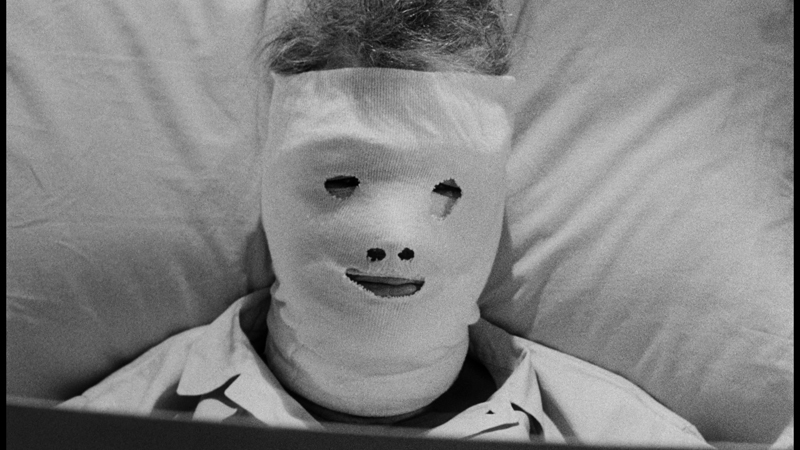 The Bottom Line
Seconds is a harrowing exploration of the meaning of the American dream and how one defines happiness and success, driven by Frankenheimer and Howe's experimental camera and Hudson's all-out-there performance. Though a bit slow in spots where the story can linger a touch too long, the story gets past the speedbumps with a disturbing, ever-present sense of dread. The presentation is spot-on, and the extras round out the package nicely, giving a solid view of the film from the inside and out. If you're a fan of Frankenheimer's other early works or like to get a bit existential, this is an underrated classic.