Fox // Unrated // July 30, 2013
List Price: $19.99 [Buy now and save at Amazon]
Review by Stuart Galbraith IV | posted August 6, 2013 | E-mail the Author
Love Me Tender (1956) was 21-year-old Elvis Presley's very first movie. He was already a national phenomenon but came into films with zero acting experience and, hard as it is to believe now, there was no guarantee he'd still be popular by the time the movie was ready for release. For those reasons Twentieth Century-Fox hedged its bets, casting Elvis in a third-billed supporting role in an unimportant B-Western. Needless to say, the gamble paid off. Indeed, the picture made its cost back in just three days, and Elvis the Movie Star was off and running.

Today, the title song is more famous than the movie, which beyond Elvis's scenes otherwise is pretty ordinary, lacking the appeal of the Elvis films that immediately followed (Jailhouse Rock, King Creole, etc.) or even the goofy charm of his better, post-Army films (It Happened at the World's Fair, Viva Las Vegas).

What Love Me Tender does offer is Elvis's startling natural acting talent and charismatic screen presence, which burned red-hot in 1956 in ways that evaporated by the mid-1960s. Watching Love Me Tender is both fascinating and heartbreaking at once, to see this fireball of talent at the start of his career, knowing, thanks mainly to the gross mismanagement of "Colonel" Tom Parker, that such incredible promise would soon dissolve into painful mediocrity.

Filmed in black-and-white CinemaScope, Love Me Tender looks phenomenally good in high-definition, far better than most CinemaScope color films from the 1950s released to Blu-ray so far. Disappointing is the audio, a 5.1 remix that's nearly effectively mono, with what to my ears seemed to offer little to no separation in music, dialogue, or sound effects, except very conservatively near the end. Included are older extras from 2006. 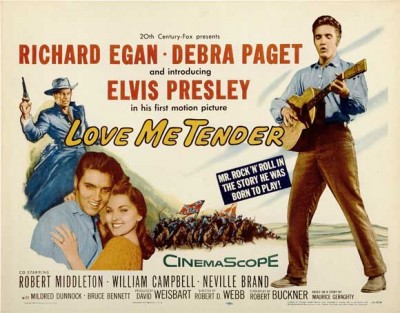 Top-billed Richard Egan stars as Vance, the eldest of four Reno brothers. Vance, Brett (William Campbell) and Ray (James Drury) are Confederate soldiers who, with Mike Gavin (Neville Brand) and two others (one played by an uncredited L.Q. Jones), raid a Union Army-controlled train station and subsequently steal an army payroll, unaware that General Lee surrendered and that the Civil War had ended the day before.

Riding toward the Reno farm, they learn about the war's end from a trio of returning Rebs (including Dick Sargent, also unbilled) but secretly decide to split up and keep the money, which Vance rationalizes as the spoils of war. Vance is particularly anxious to return home to his bride-to-be, Cathy (Debra Paget), especially after learning his family was mistakenly told that he and his brothers died in battle.

At the family farm, Vance is shocked and saddened to discover that Cathy, believing Vance dead, has only recently married the youngest Reno brother, Clint (Elvis). (In a singularly unimaginative bit of direction by Robert D. Webb, Elvis makes his screen debut in extreme long shot, barely noticeable plowing a distant field.) Clearly, Vance and Cathy are still madly in love, but try to put on a brave face for Clint's sake.

Love Me Tender was not written with Elvis in mind, but rather had been in development for some time (as "The Reno Brothers") and the result is a frequently awkward movie somewhat but not fully-committed as an Elvis vehicle. There's no sign of Elvis at all during the first two reels, some eighteen minutes, and then continues focusing mainly on Vance and Cathy's conflict, with Clint on the sidelines and in the dark for most of the story, only to be manipulated by others for the tragic climax. Egan, though conventionally handsome, was 35 going on 50, and seems way too old for Cathy while Clint appears too young, though at 23 Debra Paget was only two years older than Elvis.

Though definitely a supporting part, Elvis in his screen debut is given what was by far the hardest part to play, having to convey a broad range of emotions throughout the story, from being overcome with emotion when reunited with older brothers presumed dead, to violent rage and jealousy when Mike Gavin and his party turn against the Renos over the stolen payroll. Gavin manipulates Clint into believing his idolized eldest brother and, clearly, surrogate father is having a torrid affair with Clint's wife.

Incredibly, Elvis pulls off all of these difficult scenes with an emotional honesty that still impresses today. Contrasting the not bad but conventional performance by Egan, Elvis is particularly good in the scene where he's reunited with his brothers; he's full of emotion yet the acting is invisible. Later, confronting Cathy at the peak of his fury, Elvis holds nothing back, perhaps overreaching a bit, but with an honest intensity just then emerging in 1950s Hollywood cinema, personified by Brando and James Dean, two of Elvis's heroes. (He's so physically rough with Paget I wonder if she wasn't injured slightly.)

There would be no more supporting parts after this, and no other Elvis movies quite like it, even among his Westerns. However, the basic characterization, the innocent farm boy with the short fuse, capable of mad dog-like fits of violence, would reappear in later films to varying degrees, an oddly unappealing but firmly establish component of his screen persona.

Originally, Elvis wasn't slated to sing in the film at all, but eventually four songs were shoehorned in, including the already-released title song, adapted by Ken Darby from the Civil War ballad "Aura Lee." Despite Elvis's anachronistic hip gyrations, none are really rock'n'roll songs, but rather quasi-folk tunes, vaguely period, songs The Weavers would not have seemed out of place singing. The other three, actually written by Darby but jointly credited to Elvis and Darby's wife, Vera Matson, are "Let Me," "Poor Boy," and "We're Gonna Move," none particularly memorable but better than the frequently awful songs of Elvis's later, 1960s films.

Released in CinemaScope by Twentieth Century-Fox, Love Me Tender probably had some release in four-track magnetic stereo originally, but those stereo tracks must be lost as the audio here is pretty much mono throughout. There's little to no discernable separation effects in the music, dialogue, and sound effects even where obvious directional opportunities exist. Indeed, the only directionality I noticed at all came near the end, in a canyon scene with some echoing effects channeled to the surround speakers. Conversely, the monochrome image looks great, perfection even, and a real pleasure to watch. Officially touting a 5.1 DTS-HD Master Audio remix, the disc also includes DTS-MD 1.0 English and Spanish mono, and optional subtitling in English, French, and Spanish. My Japanese player defaulted to hidden Japanese language options but, unusually, minus all of the featurettes. Apparently Fox didn't want to go to the expense of subtitling those.

Love Me Tender was first released to DVD in 2002, and then reissued with extra features four years later. The Blu-ray ports over all these 2006 supplements: an audio commentary track by Elvis historian Jerry Schilling, a couple of trailers, and four short but informative featurettes: "Elvis Hits Hollywood," "The Colonel & The King," "Love Me Tender: The Birth & Boom of the Elvis Hit," and "Love Me Tender: The Soundtrack." I particularly like "The Colonel & The King," an honest assessment of the Elvis's manager, the self-styled Kentucky colonel who in fact was Andreas Cornelis van Kuijk, an illegal immigrant possibly wanted for murder in his native Breda, in the Netherlands.

As a movie, Love Me Tender is no better than fair but Elvis, with no previous acting experience, makes such a fiery screen debut it's easy to see why teenage girls screamed and swooned when it was new. The audio disappoints but the picture quality is phenomenal. Highly Recommended.