Olive Films // Unrated // July 30, 2013
List Price: $29.95 [Buy now and save at Amazon]
Review by Stuart Galbraith IV | posted August 13, 2013 | E-mail the Author
The Quatermass Xperiment (1955) and its even better sequel, Quatermass II (1957) are among the best sci-fi movies ever made. Though low-budget British productions, both films have extremely intelligent scripts (adapted from Nigel Kneale's television serials) and are still effective, even scary, when seen today.

But those movies were exceptions to the rule. Fifties sci-fi movies emanating from Britain were fairly rare to began with, and those that were made tend to be either dull (Spaceways, Satellite in the Sky) or uniquely bizarre (Devil-Girl from Mars). Fire Maidens of Outer Space (1956) is an anomaly among anomalies. Written, produced, and directed by Chicago-born Cy Roth and starring Nebraska native Anthony Dexter, the film deliberately (and pretty accurately) emulates the worst Hollywood-made low-budget sci-fi movies. Specifically, Fire Maidens of Outer Space is basically a British rehash of Cat-Women of the Moon (1953), the admittedly hilarious, naïve turkey starring Sonny Tufts and Marie Windsor. Alas, Fire Maidens of Outer Space isn't as memorably awful as that wondrous film. Though opening scenes are clearly set in England, there's a vague attempt to make the film appear American, and American accents dominate.

However, until now Fire Maidens of Outer Space was one of the most difficult ‘50s sci-fi movies to see. I remember it turning up once or twice on the Sci-Fi channel more than 20 years ago but nowhere else before or since, and this is its first official home video release. The movie may be among the worst-ever professionally produced science fiction films, but I'm genuinely grateful to Olive Films for making it available, and in glorious high-def to boot. 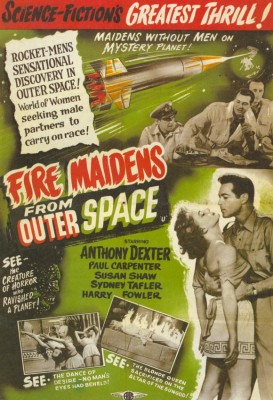 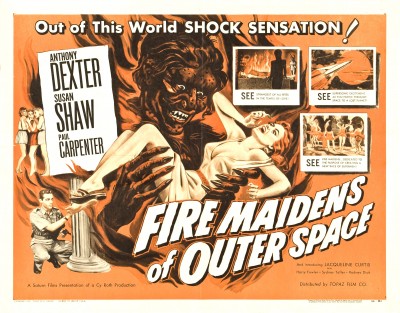 
American scientist Luther Blair (Anthony Dexter, who starred as Valentino and resembled him, but then did only minor films afterwards) flies to Surrey, England to lead "Expedition 13," a mixed crew of Americans and Brits, on a space flight to Jupiter's earth-like 13th moon. (And it wasn't even discovered until 1974, when it proved barely large enough for Daffy Duck and Marvin the Martian to cling to at that.)

They get there by way of V-2 rocket footage and stock effects shots from the superior Rocketship X-M (1950). There are only a couple of original visual effects in Fire Maidens of Outer Space, and most of these involve matting the preexisting stock scenes to new footage.

On Jupiter's moon, whose topography resembles, well, Surrey (a moving car is visible in the distance), the crew encounters the last remnants, mostly beautiful women, of the presumed-lost civilization of Atlantis, which fled earth eons before in the mistaken belief that rising seas would cover Earth's remaining continents.

The movie breaks into several curiously disconnected parts and is apparently spread over several months, though nobody on the moon or monitoring them back on earth ever bothers to change their clothes. Blair and Capt. Larson (Paul Carpenter) are mysteriously held captive by Atlanteans, specifically elderly Prasus (Owen Berry), last of the original Atlanteans, and his daughter, Hestia (Susan Shaw). These scenes take place in cramped interior sets suggesting the foyer of a struggling gyros restaurant.

Meanwhile, the rest of the crew waits, not particularly restlessly, for the two men to return. Elsewhere, a "Creature" (Richard Walter), called nothing else, lurks about in some brush, vaguely growling at passersby. Dialogue insists it bears "all the characteristics of a caveman," but in fact looks more like an acromegalic mime run headlong into a cheese grater. Beyond the dozen "fire maidens" who spend most of the picture dancing about, aimlessly, the moon seems to have no other residents.

Cy Roth had a notably short and uneventful career. He worked as both an editor and assistant director on a short list of films, but seems to have directed or produced only three other films, all minor, all in America: Combat Squad (1953), Air Strike (1955), and Outlaw Queen (1957).

Roth, or somebody, seems to have realized just how foolish Fire Maidens of Outer Space was. There's a hint of this in the main titles, a disclaimer that "All characters in space are fictitious," but the rest of the film is not written for laughs. That it would model itself after cheap films like Cat-Women of the Moon is unfortunate. The two Quatermass movies cost about the same amount of money, so a much better film was certainly within reach.

Moreover, it lacks Cat-Women not-stop silliness, though it is occasionally amusing. The crew, upon landing, all whip out Chesterfield cigarettes to smoke in the pressurized cabin, for instance, afterwards ditching their housepainter uniforms for more standardized military gear. On the moon, one of the crewmembers brings along a high-tech camera to record the historical visit: a Polaroid, the instant camera having debuted in 1948, less than a decade before. The score uses stock classical themes, notably Borodin's Polovtsian Dances from Prince Igor, better known in English as "Stranger in Paradise" (from the musical Kismet). But don't read any significance into its use; it was just a cheap way to get classy-sounding music on the soundtrack. Kubrick it's not.

The film was originally released in the U.S. by a minor distributor called Topaz (which also released several obscure Japanese films) and now owned by Paramount. The onscreen title of this high-def transfer reads Fire Maidens of Outer Space though some British ads (see above) and possibly but not definitively some British prints used the slightly different Fire Maidens From Outer Space moniker.

Fire Maidens of Outer Space is presented in 1.66:1 widescreen which appears correct. The framing is excellent throughout and while the print shows some minor damage here and there, possibly inherent to the original negative, the presentation is basically terrific, especially considering how obscure the movie is. The mono audio, English only with no subtitle options, is also fine. No Extra Features.

There are very few 1950s sci-fi films not officially released on DVD, though many are not yet on Blu-ray. That Fire Maidens of Outer Space is new to both formats makes it especially welcome, even though the movie is quite terrible. But, by golly, I'm sure happy to have it. For genre fans it's Recommended.