Any initial visit with a Terrence Malick film is merely a series of first impressions. As the sculptor molds his clay, we can only try to keep our minds fresh to see what each new wrinkle will reveal or what the next push of the thumb will cover up. Prone to endless zooms and pirouettes, Malick's camera circles his characters, building patterns and shapes, until themes emerge and a foundational narrative takes shape. His movies may appear to be all gloss and undercoating, but that's misleading. Text and subtext are inseparable. Terence Malick feels aesthetically.

And so it is with To the Wonder. Only Malick's sixth film in forty years, it is as mired in the auteur's personal style as all of his features, and yet it is free of the usual nostalgia. It's his first effort set entirely in the present day. Time has finally caught up with his artistry.

The film's story, such as it is, mainly focuses on one couple, Neil and Marina, as played by Ben Affleck (Argo) and Olga Kurylenko (Quantum of Solace). Their love blossoms overseas when Neil is visiting, and Marina returns to the American Southwest with him, bringing her young daughter (Tatiana Chiline) along. The romance goes well, and then it doesn't, and then Marina's visa runs out. Neil has a problem with commitment, and so no wedding ring is forthcoming, and thus no citizenship, forcing Marina to move back to France, where she is unhappy and alone, especially after the little girl leaves her and moves in with her father. 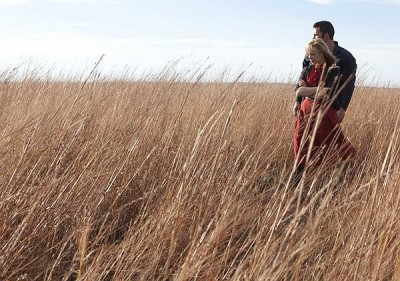 Meanwhile, there has been an interlude where Neil reconnects with a high school sweetheart (Rachel McAdams, Morning Glory). Though he sees a promise of something there, he cannot commit to this woman either. She clearly represents something different for him than Marina. Jane dresses more conservatively, in the style of their locale, and works with animals. She is proper, and though needy, more traditionally expressive. Marina, on the other hand, is more carefree. She wears brighter colors and sundresses. She is sexual and impulsive, prone to dancing in supermarkets and parks. She connects to the earth and mud fearlessly, as if it is something to be explored. As a farmer, Jane respects and fears nature in appropriate measure, and she even masters it. Likewise, Neil is an environmental scientist, testing the water and soil of the neighboring communities for contamination. He sees danger where Marina sees life. She bounds out into the water while he cautiously steps and stumbles.

Woven into this is a priest (Javier Bardem, No Country for Old Men) who counsels Marina and others like her even as his own faith slips away. He works in service to the same desperate community that Neil is also trying to keep from harm, and so the two men cross paths. They are doubles in a way, doppelgangers who suffer similar fates. It's the priest, Father Quintana, who diagnoses their joint problem: both men are too strong and so can too easily walk away. Those who love them and whom they love, be it the earthly Marina or a heavenly father, need their affection and, by default, are weak. Somehow these two elements should complement each other, but the divide may prove too wide to traverse. The men are disconnected, their resources are contaminated, they don't engage. 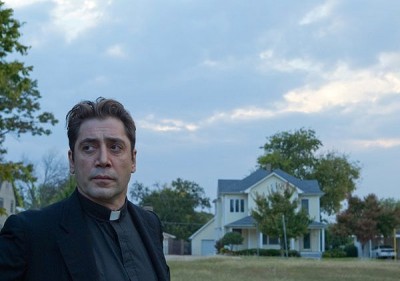 Or so is the summation of my many first impressions.* Malick sticks to his well-established technique in To the Wonder. As with his other 21st-century films, The New World and The Tree of Life, To the Wonder is not reliant on dialogue, perhaps even less so than narrative structure. Ben Affleck barely opens his mouth in the entire two hours. Instead, Malick layers multiple trains of thought over the visuals, letting each character speak of their feelings, impressions, and ponderings. Marina has the most to say, but the other principals have their opportunities, as well. What they say gives meaning to what we see.

Which is, of course, gorgeous. Even if Malick's movies failed to hang together as well as they do, I'd still go just to stare. The visionary director and his cinematographer Emmanuel Lubezki doggedly pursue beauty. Under their gaze, the interior of a supermarket is as awe-inspiring as the interior of a church, with its ornamentation and stained glass windows. Much is made of Malick's obsession with "magic hour," that golden time of day when the sun is perfectly poised just before setting, but To The Wonder also has its rainy days and dewy mornings. It grows increasingly overcast as the movie progresses, as the light fades from the relationship. Marina returns to America, and the second go-around ends up being their undoing. Even her clothes change. The colors are darker, her shoulders o longer bare. The common phrase, oft-parodied, in regards to "magic hour" filmmakers is that they end up "chasing the light," trying to keep up with the sun as it fades away. That is not just a literal thing, but a central metaphor of To the Wonder. Father Quintana is instructed by a man possessed of faith to touch the window inside the church and feel the divine presence that shines through. In one crucial airport scene, Marina literally walks down a tunnel and into blinding illumination, unknowingly headed for rebirth (she fears she is heading to the underworld, and what we initially see immediately after momentarily backs that up). And then, of course, there is that finale, and the symbolic closing image, which catches the viewer unaware even as it settles us into the black of the closing credits.

It's only when that blackness envelops you that you'll likely really begin to understand what you just saw. All the emotion, all the sensory data, will start to settle and coalesce. The music, the poetry, the visual codes start to lock into place. Early understanding is not about intellectual dissection. Rather, it's instinctual. You have to trust what Malick has done to do its work rather than work at it yourself. The experience is haunting and magical and astonishing and profound. Even without the metaphysical and cosmic digressions of The Tree of Life, To the Wonder is still complex and emotional and deeply spiritual. It's a motion picture about how we connect to each other and to our world and to all that lies beyond and, ultimately, about how we connect with the movie itself, and the flickering images it presents--going to the wonder, be it the wonder of another person, of faith, or cinema, and becoming one with its glow. 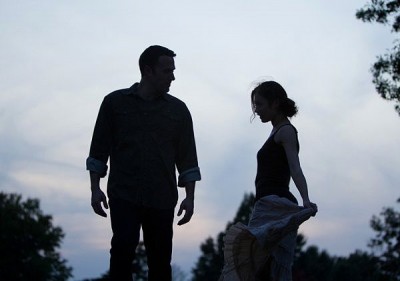 * Though I watched it again for this Blu-ray review, I was pleased enough with my first piece to stick with it. Also, thanks to Joëlle Jones for her contributions to the above.

Video:
Well, if any filmmaker deserves to be given the full high-definition treatment, it's Malick, and for all that the disc lacks as a package, Magnolia does not shy away from giving To the Wonder a glorious home video presentation. The widescreen (2.35:1) transfer is AVC-encoded in 1080p. Colors are stunning, resolution is sharp, the whole thing looks brilliant and clear. Having seen it both in a theater and at home, I feel the experience has been equal, and the transition from one venue to the other is flawless.

Sound:
I approve of any disc that opens with the instructions to turn the volume up loud for maximum effect--and To the Wonder deserves it. The soaring music envelops you, as the soft-spoken dialogue and narration gently eases in from underneath. The 5.1 DTS-HD Master Audio mix is perfection, creating a full surround experience for the home viewer.

Extras:
A largely cursory release, in a standard BD case, with a smattering of predictable extras. There are four video features--"The Making of To the Wonder, "The Actors' Experience," "The Ballet," and "Local Flavor"--that total about 25 minutes all together and are cut from the same cloth. Indeed, some even use the same interview footage with cast and crew. The focus throughout is how the movie came together, with Malick's unique shooting method and the use of an actual small town for its location filming. Malick himself is notably, intentionally absent.

The theatrical trailer is also included. All the extras are in HD.

FINAL THOUGHTS:
Highly Recommended. The only real knock here is that To The Wonder is, excepting the a/v quality, seemingly a disc the studio dumped out there without much regard to giving it the same kind of banner treatment as The Tree of Life. Audiences mostly missed To the Wonder and critics mostly misunderstood it, but Terrence Malick's latest is, in short, a wonder unto himself, at once his most simple and direct and also his most elliptical and suggestive. It's hypnotic and beautiful and ultimately cleansing, offering a glimpse at a better tomorrow where the heart can get in sync with the spinning globe, accepting the universe and being accepted by it. Beautifully shot, exceptionally performed, and realized with grace and artistry, To the Wonder deserves so much better, but until a deluxe edition comes along, you'd be doing yourself a disservice to miss picking this one up. 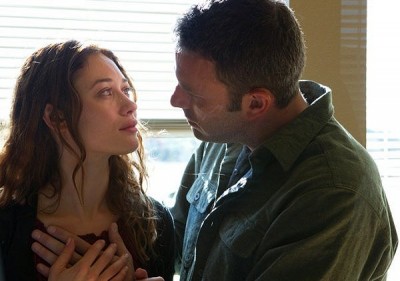