George A. Romero's Day of the Dead - Collector's Edition

Shout Factory // Unrated // September 17, 2013
List Price: $29.93 [Buy now and save at Amazon]
Review by Tyler Foster | posted September 4, 2013 | E-mail the Author
Note: Although screencaps can only tell so much of the story, click any capture (taken straight from the disc) in this review to expand the image to full size. 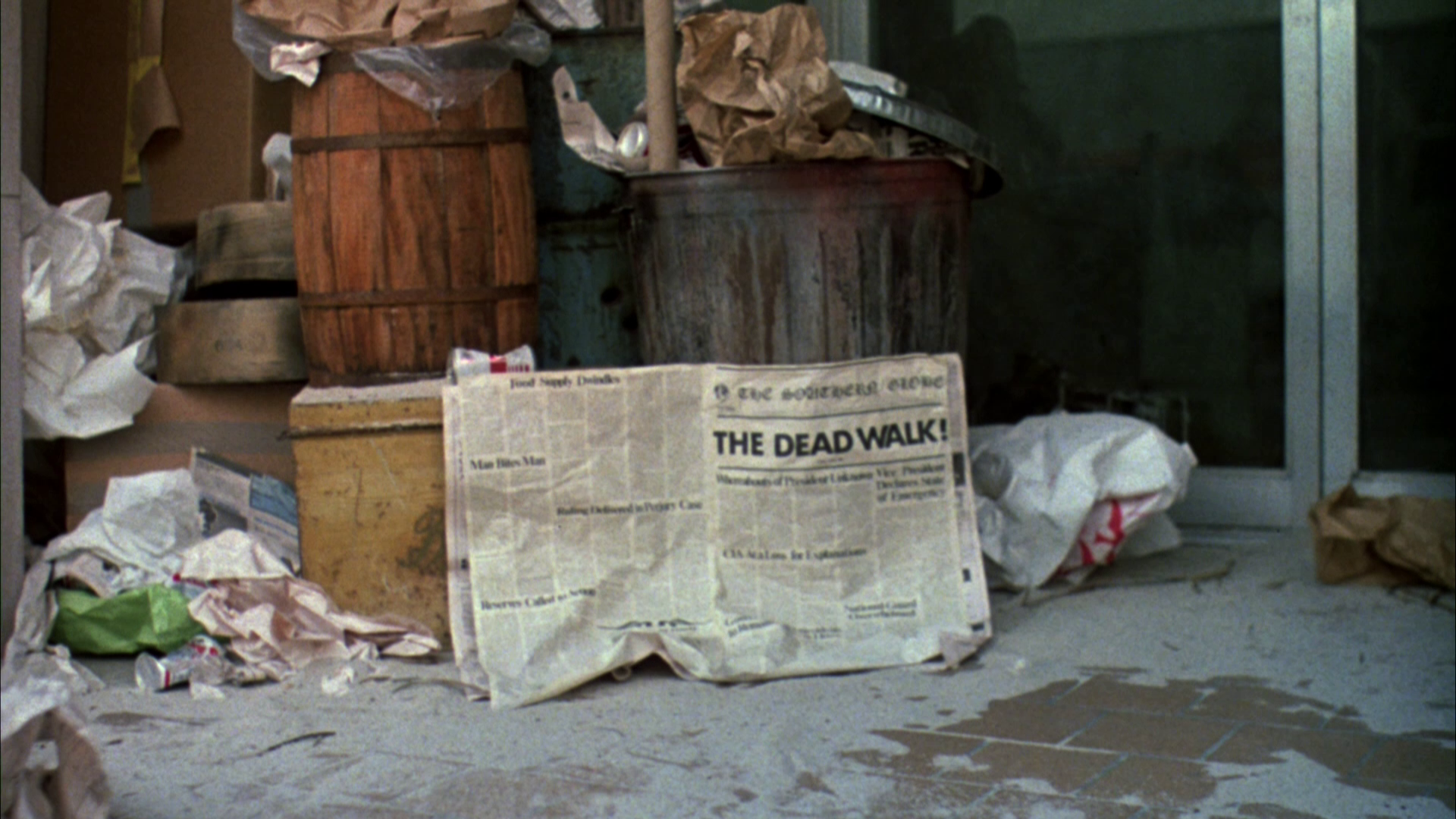 400,000 to 1. That's how many human beings Dr. "Frankenstein" Logan (Richard Liberty) estimates are left, an unidentified amount of time into the zombie apocalypse first seen in George A. Romero's Night of the Living Dead, and continued in Dawn of the Dead. The power is off on the mainland, and helicopter rescue parties heading up and down the coastline toward Washington D.C. have turned up nothing but town after town filled with shuffling, bloodthirsty corpses. The searchers: members of a scientific-military partnership formed to study and combat the disease. Sarah (Lori Cardille) works alongside Dr. Logan and Dr. Fisher (John Amplas) to try and understand the outbreak (Sarah hopes to cure it), while trying to slow the mental breakdown of her soldier boyfriend, Miguel (Antone DiLeo). Meanwhile, the psychotic Captain Rhodes (Joe Pilato) and his unhinged unit (Gary Klar, Ralph Marrero, Taso Stavrakis, Phillip G. Kellams, Greg Nicotero) get antsier and antsier about handling Dr. Logan's "living" specimens. Helicopter pilots John (Terry Alexander) and McDermott (Jarlath Conroy) land somewhere in the middle, trying to keep their heads down. All three groups are forced to co-exist in an underground bunker, and tensions run high as Dr. Logan's work drifts toward the unusual -- the potential domestication of zombies.

When Day of the Dead first hit theaters in 1985, it was not warmly received. Not only did it have the daunting task of following up Dawn of the Dead, a major smash, but it also opened a month before the wonderful but distinctly different zombie comedy The Return of the Living Dead. Day of the Dead, unlike both its predecessor and the Dan O'Bannon movie, is relentlessly grim -- of the three scenarios depicted in Romero's original trilogy, this is the bleakest, with people pushed to their limits in a society where the normal code of social conduct no longer applies. The notion of civility as the last remaining barrier between us and the creatures fascinates Dr. Logan and drives his research, particularly his interest in the development of "Bub" (Gary Sherman). "The same animal, just functioning less perfectly," he concludes. "Reward is the key!" 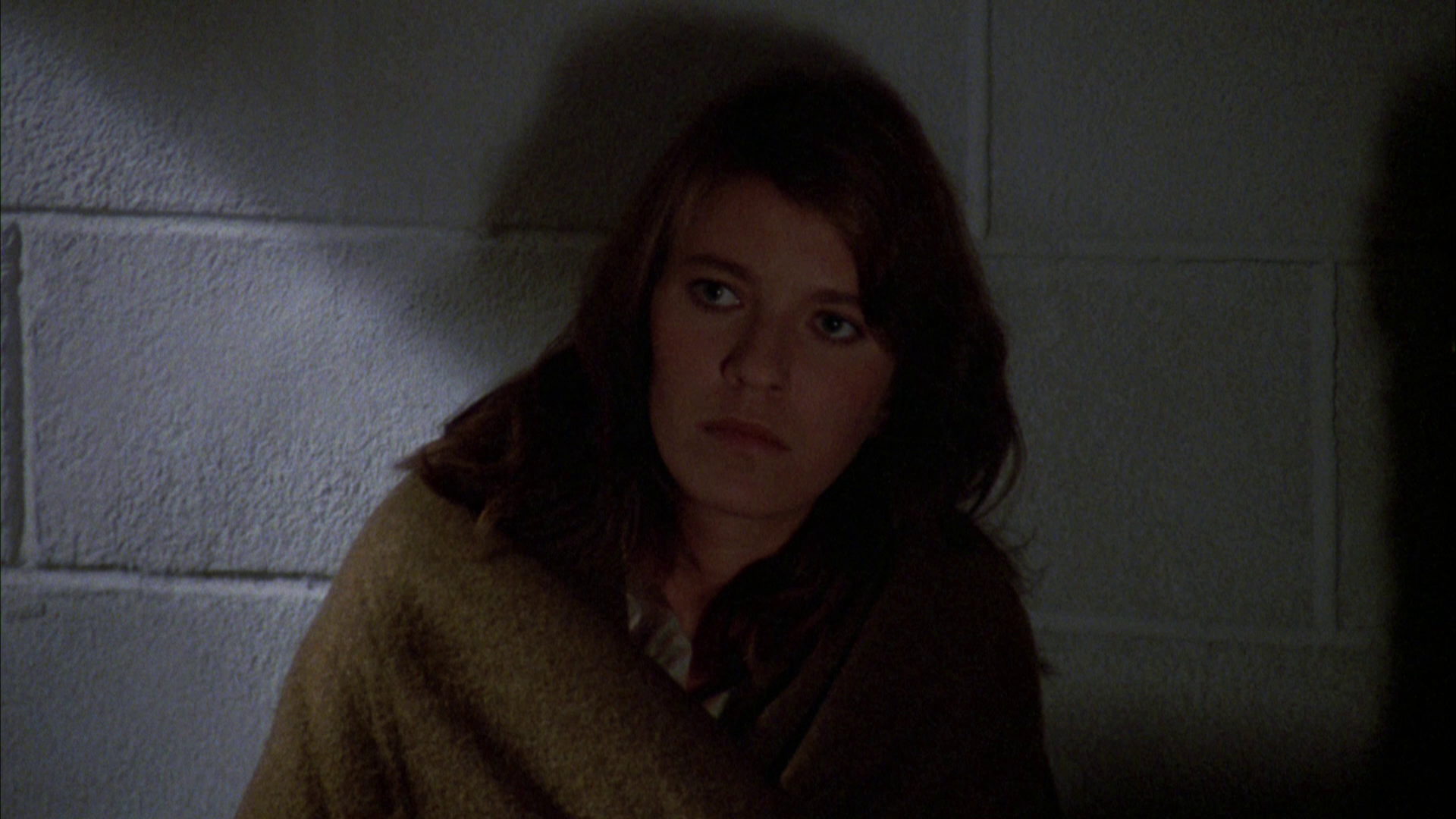 Unfortunately for the scientific team, there's little reward that can appease the military men on site, other than exercising their minimal amount of power over the scientists' ability to finish their research. If Night of the Living Dead took a cynical look at what made humans their own worst enemy, and Dawn of the Dead satirized the relationship between humans and zombies, Day of the Dead suggests the possibility that we simply cannot avoid becoming zombies. Logan tells Rhodes that "Civil behavior is what distinguishes us from the lower forms," but with the rewards of pay and status in society removed, Rhodes and his men are as relentless and simple-minded as the creatures they hate, with their interest in just leaving the scientists to die only marginally overshadowed by their desire to see every last zombie wiped from the face of the Earth. Rhodes represents the worst of humanity: a man whose civility was just a front he put up because it's not socially acceptable to be a complete psychopath.

At the same time, Day of the Dead does offer hope on the horizon. On one hand, there's John, who suggests to Sarah that she'd be better off enjoying what life she has than wasting it trying to solve a problem that can't be solved. Sarah is set finding a cure, but if Dr. Logan is correct, the only cure is reteaching the zombies the manners they've lost. To that end, Bub is at the opposite end of a spectrum that includes Rhodes: a zombie that instinctively remembers the difference between right and wrong, even when there's no reward for his actions. I'm sure there are people that dislike Day of the Dead as the first real revision of Romero's idea of his version of zombies, but he changes them to make a point, and one that serves as a counterpoint to the movie's tone. Day of the Dead is critical of humanity, but in the end, Romero still leans toward the optimistic, angling for an outcome that's more Dawn than Night. 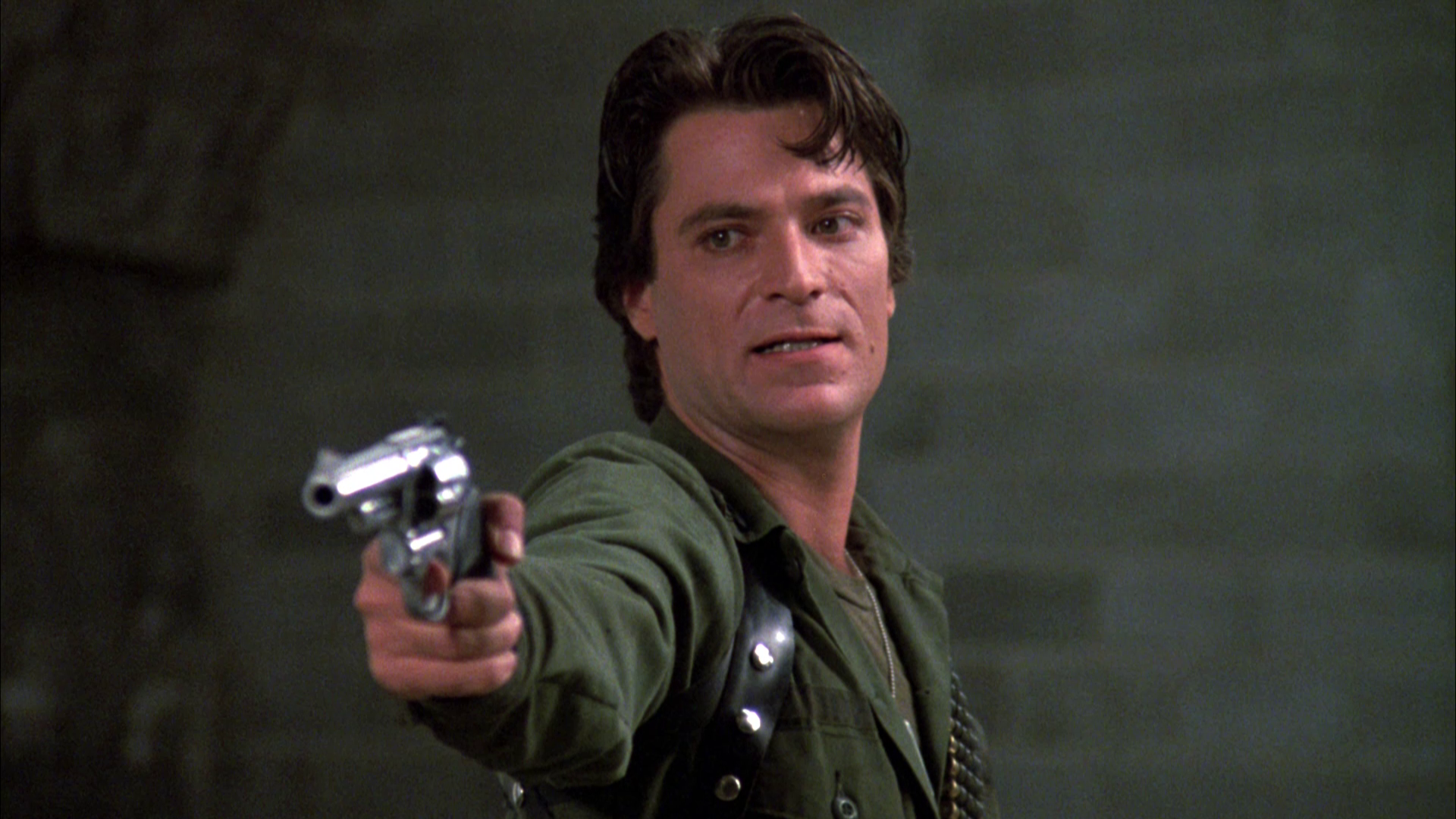 Directorially, Romero accomplishes lots with very little. Although the majority of the movie only features about 10 or 15 zombies and very little zombie action, the film doesn't feel cheap or insubstantial thanks to an opening in an abandoned coastal city and a massive finale, and Tom Savini's incredible gore effects, including a nearly disembodied brain attached to a headless zombie body, a wonderful shovel-through-the-mouth gag, and one of the most iconic deaths in zombie movie history. For many, the success of the film will rest on Pilato's exaggerated performance, but personally, I'd say it works, seething with a specific type of impotent rage and frustration. Cardille is also excellent at conveying a certain strength under pressure, and Jarlath Conroy manages to leave an impression despite a character with little to do, through brief character beats and his friendship with Alexander's John. It might not be intentional, but their trailer paradise turns the consumerist criticism of Dawn on its head -- here, the escape seems more like sanity than retreat. As the film approaches its 30th Anniversary, it's good to know that fans have begun to step back from Day of the Dead as "the sequel to Dawn" and view it as its own piece of Romero's zombie puzzle.

The Blu-Ray
Just like previous Shout! Factory Collector's Editions, this Blu-Ray of Day of the Dead arrives with a slipcover bearing brand new artwork (by Nathan Thomas Milliner). The standard non-eco Blu-Ray case inside features the same new artwork on one side of the insert, with a UPC-free cover on the reverse featuring the original poster art. Personally, Shout's new artwork is usually a miss, but this bold, comic-book-ish commission is nice, and wins out over the bland theatrical art (as far as Day of the Dead marketing goes, I prefer the Japanese Day poster with the "arms-through-the-wall" gag, used on Arrow's Blu). This particular Collector's Edition is not a combo pack -- only a Blu-Ray in this set.

The Video and Audio
Day of the Dead was previously issued on Blu-Ray by Anchor Bay in the US, and Arrow Video in the UK. Both appeared to be the same master, which offered drab colors and almost no grain, likely thanks to an over-application of DNR. Although new masters are usually cost-prohibitive for Shout! Factory, a major draw of the new disc is that it boasts an "all-new film transfer," according to the packaging. Presented in 1.78:1 1080p AVC, this new disc is an easy recommendation over Anchor Bay and Arrow's discs, but not quite a home run. In the plus category are grain and color, which are both very nicely rendered. The smooth image of the previous discs has been replaced with one offering a healthy sheen of film grain, and even some depth and dimension in certain shots. 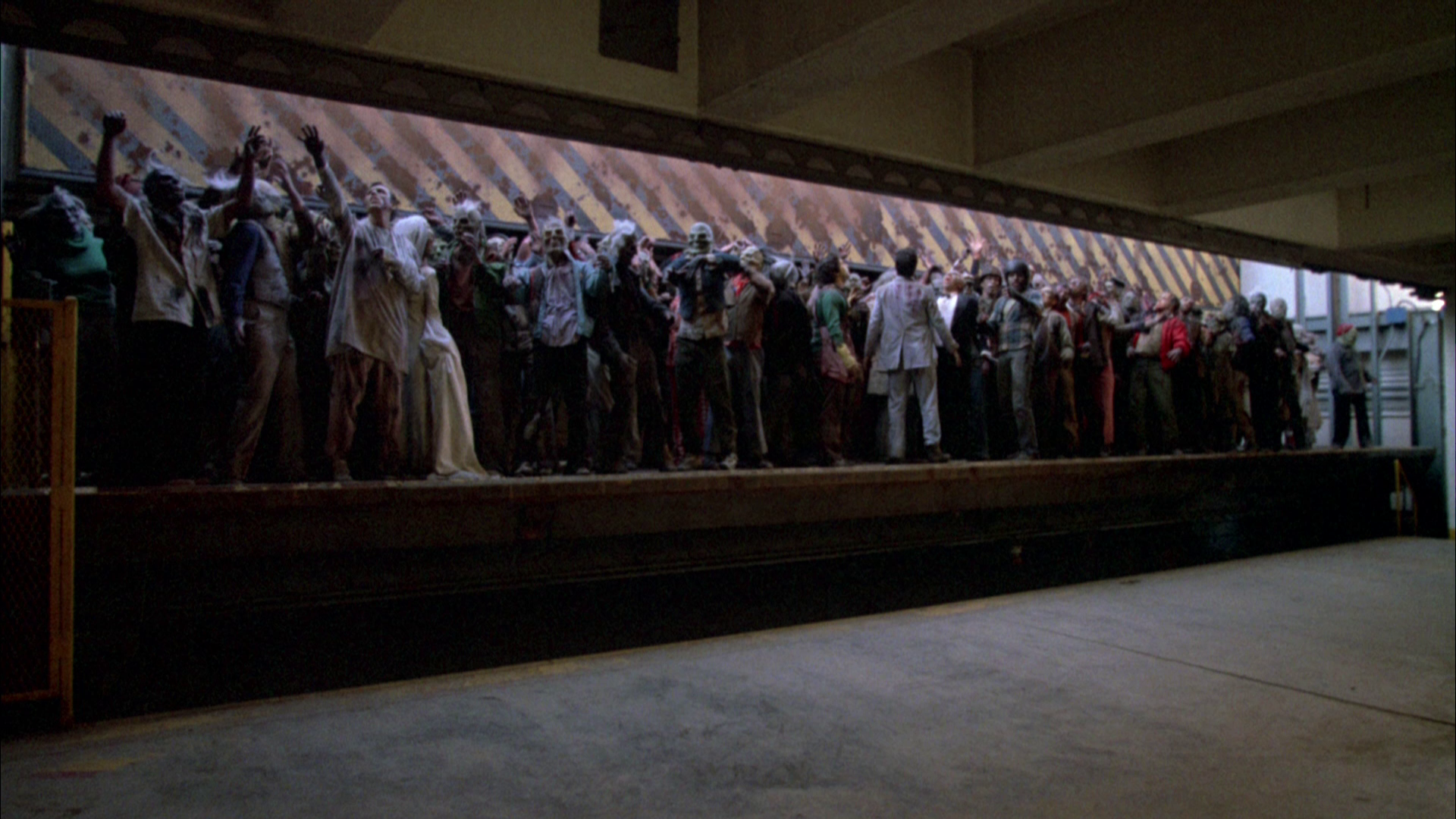 Reds, in particular, are wonderfully saturated and vivid, but of course, there's also the green Army outfits, Sarah's pink shirt, and bright blue skies to illustrate the improvement. On the downside, detail has not improved to any noticeable degree -- while texture has been restored to the image as a whole, the image doesn't reveal finer detail or noticeably improved clarity. Additionally, whites are heavily crushed, indicating contrast boosting on the new disc. It's still a no-braaaainer -- this is far and away the better looking of the American and Region 0 releases, and probably the best presentation of the film on home video anywhere in the world -- but it's just a satisfying upgrade, not a revelation.

Also in the "improvement" category, for purists: Shout! offers only an original DTS-HD Master Audio 2.0 Mono track, which retains all of the original sound effects and dialogue (many snippets were mysteriously edited and censored on the Anchor Bay and Arrow releases). This rich, vibrant mix grooves with the synthesized sounds of John Harrison's electronic score, and picks up on the atmosphere of the abandoned mine where the film takes place. Dialogue has a hint of fuzziness to it, but nothing unnatural or distracting, and the moans of crowds of zombies can seem to surround despite the mix's age. English captions for the deaf and hard of hearing are also provided.

The Extras
Most of the material on this disc has been ported from the Anchor Bay edition. This includes: two audio commentaries, one featuring Romero, Savini, Cardille, and production designer Cletus Anderson, and the other featuring filmmaker Roger Avary; behind-the-scenes footage from Tom Savini's archives, a promotional video for the Wampum Mine, and some photo galleries. Two things are missing: the final audio interview with actor Richard Liberty, and "The Many Days of Day of the Dead", Anchor Bay's 30-minute retrospective documentary.

To make up for the loss of the older behind-the-scenes feature, Shout! has created an all-new feature-length documentary, "The World's End: The Legacy of Day of the Dead" (1:25:25, HD). In all honesty, this piece is probably a little long, marking the first time I was at all underwhelmed with a Red Shirt Pictures production. Despite running three times the length of the AB doc, I'm not sure this new look at the making of the movie goes into three times as much detail, although there are some interesting little tidbits, such as interviews with two of the major zombie players, the info that Spike Lee's long-time DP worked on the film's opening credit sequence, and the talk about the film's reception. 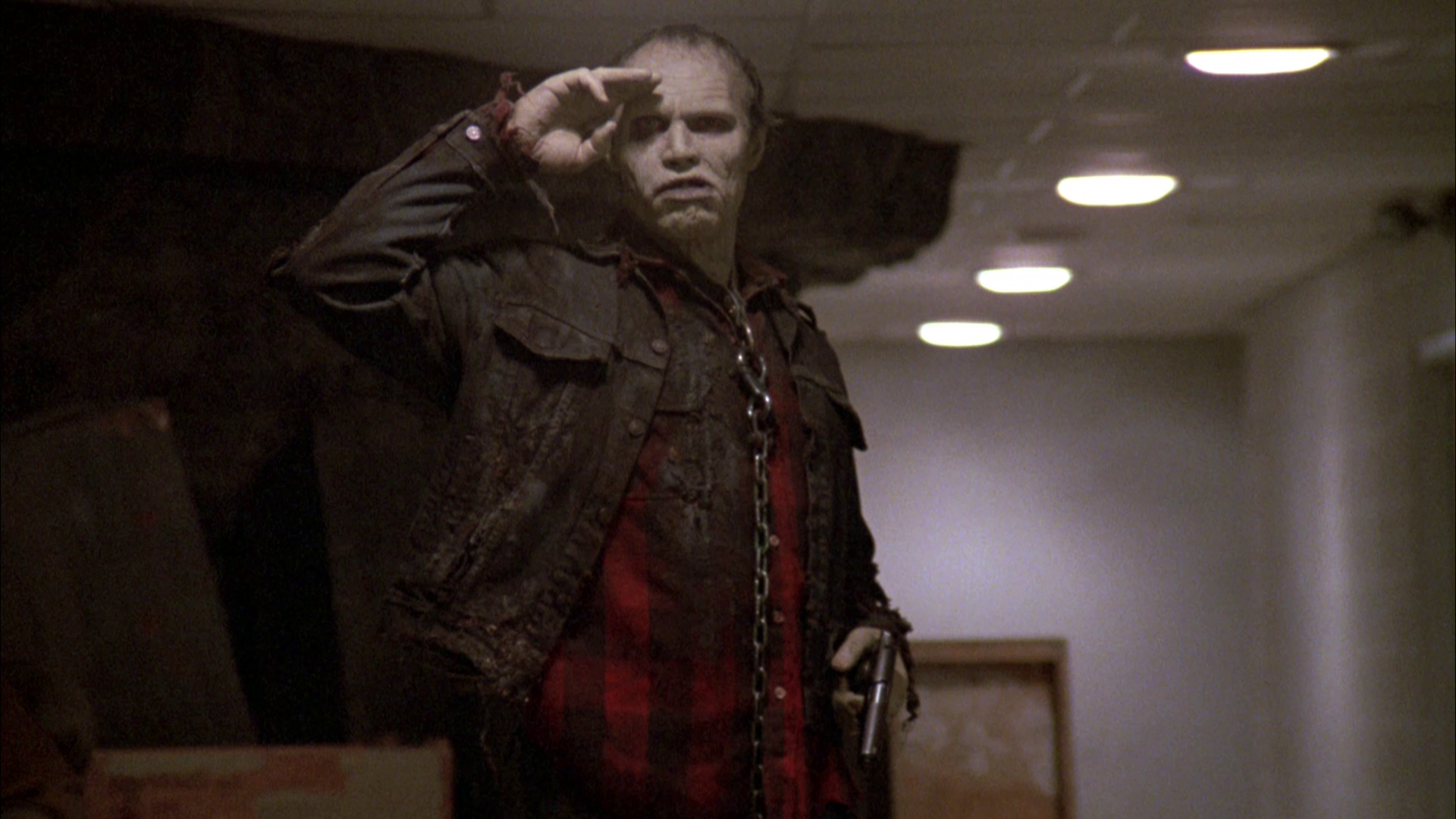 It's also nice to hear from a number of cast and crew members who were not interviewed for the other documentary, including Alexander, DiLeo, Klar, Amplas, Michael Gornick, John Harrison, and more (tragically, Jarlath Conroy is still absent). Good, and certainly meaty, but it could've probably used some more trimming -- quality, not quantity.

The other new extra is "Underground: A Look at the Day of the Dead Mines" (7:37, HD), which chats with "facility tech" Skip Docchio to discuss the experience of working down in the mine, intercut with Cult Magazine writer Ed Demko (who looks and sounds uncannily like Seth Rogen) around the location. It's fun, and Demko's interview is surprisingly poignant, but the clip actually doesn't offer much of a look at some of the modern locations! Most of them are seen out-of-focus, behind Demko...although, then again, it's sort of an industrial cave.

Conclusion
This "Collector's Edition" of Day of the Dead falls a couple very minor points short of perfect -- it won't completely allow fans to replace their Anchor Bay editions, and the new transfer is merely worthy of applause rather than outright celebration. Still, this outclasses the previous Blu-Ray on the market pretty handily, and it's pleasing to know that the film itself continues along its path toward re-evaluation among the original Dead trilogy. Highly recommended.