The Criterion Collection // Unrated // August 20, 2013
List Price: $39.95 [Buy now and save at Amazon]
Review by Stuart Galbraith IV | posted September 4, 2013 | E-mail the Author
Charulata (1964), previously known as The Lonely Wife, is the protagonist of Indian director Satyajit Ray's straightforward and exquisitely acted drama about a bored, creatively stifled wife whose carefree cousin-in-law inspires her but also threatens her marriage. Adapted from Rabindranath Tagore's novella The Empty Nest, it's a simple humanist story very accessible for those new to Ray's films, a movie Ray himself reportedly liked best among his films.

I envy that first-time viewer. I saw my first Ray film around 1978-79, a 16mm print (of Abhijan maybe) in an evening community college film class (I attended while in the ninth grade!). The print was so terrible the white subtitles were impossible to read during the daytime scenes while, contrastingly, the night scenes were printed so dark it was impossible to tell what was going on except via the subtitles.

Further, in recent years film preservationists have expressed dire warnings about the rapidly deteriorating state of Ray's original films, but Charulata, with its late-nineteenth century setting, almost looks like a brand-new movie, so clean and perfect is this new high-def transfer.

The movie isn't so much profound as it is universal and heartfelt, with unforgettably moving performances by its three leads. Criterion's Blu-ray disc offers new interviews with two of them, along with many other excellent extra features. 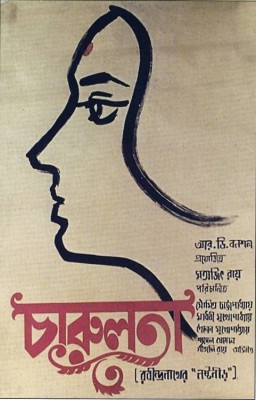 Like an Indian Susan Alexander Kane, Charu (Madhabi Mukherjee) is the bored and lonely wife of a wealthy newspaperman, Bhupati (Sailen Mukherjee), who wants to advocate populist causes in Colonial India. As expected of wives in her position, Charu rarely leaves the house, wiling away her time embroidering a handkerchief for her husband and reading fanciful Bengali literature from his library, books the comically practical Bhupati has no use for.

But he is not at all abusive nor is he consciously oppressive. He's kind, generous, and sensitive but simply cannot comprehend Charu's unhappiness. Trying to help he invites her brother, Umapada (Shyamal Ghosal) and his wife, Mandakini (Gitali Roy), to come and live with them, he as Bhupati's financial director and she as a companion for Charu. But the two women don't mix well, expressed in a scene where Mandakini's enjoys playing simple card games based entirely on luck, not skill.

During a sudden windstorm another relative appears, Bhupati's free-spirited cousin, Amal (Soumitra Chatterjee), an aspiring writer. Charu has expressed interest in trying to write herself, so Bhupati's asks Amal to subtly encourage these ambitions, unaware that the two like-minded spirits will draw dangerously close to one another in the weeks that follow.

Ray and Akira Kurosawa are often likened for their similarly humanist concerns, as well as some stylistic similarities. (The use of wind in Charulata turns up in Kurosawa's films, too, signaling a sudden shift in tone, character self-realization or, in this case, the introduction and eventual departure of Amal.) In the new interviews with Mukherjee (who, like Hideko Takamine, reportedly had an affair with her director) and longtime Ray regular Chatterjee, they express similar loyalties, working methods, and freedoms acting in Ray's films.

Charulata is often referred to as a tragedy but the movie doesn't really seem to end that way, though Ray himself thought so in a mid-‘80s interview. Somewhat open-ended, I found it strangely hopeful, that Charu and Bhupati's relationship might endure and eventually even thrive, indirectly enlightened by a double-dose of personal tragedy.

Charulata doesn't try to dazzle its audience with technical virtuosity, though one such scene is justly famous, with Charu singing Tagore's song "Fule Fule Dhole Dhole" on a garden swing, the camera exquisitely cutting among tight shots of Chula's toes touching the ground, her perspective watching Amal as he writes, and the camera mounted on the swing with Charu, fixed tightly fixed on her hypnotic gaze. (The 2005 Bollywood musical Parineeta pays homage to this sequence.)

And what a face! Despite other films Charulata became Mukherjee's signature role in the same way Casablanca became Ingrid Bergman's. Twenty-two years old at the time, she was not particularly exotic but extraordinarily beautiful just the same, and her performance dazzles. Before Amal's arrival she looks elegant but almost middle-aged, yet when her cousin draws out the Charu aching to emerge, she subtly blossoms like a flower. It's an extraordinary transformation yet for the movie audience it's almost on a subconscious level.

Charulata looks flat-out amazing, especially, as noted above, for those of us who endured years of practically unwatchable prints and VHS tapes of Ray's films. In its original 1.33:1 theatrical aspect ratio, Charulata looks practically perfect. Most of the film was transferred from the original camera negative with a few bits so warped they had to be replaced with an original 35mm safety grain. I noticed this only once or twice, around the 50-minute mark, for instance, where the image briefly becomes a bit softer and takes on a harsher contrast. The monaural Bengali soundtrack (interspersed, as usual, with some English) is clean and clear, and the subtitles generally good. The disc is Region A encoded.

Also included is an archival audio interview with Ray and film historian Gideon Bachman that's unusually thoughtful and intelligent. I'd only seen and heard Ray in later interviews; here his cultured British accent is a surprise, Ray sounding like a cross between George Sanders and Peter Ustinov. Criterion's usual booklet contains a nice essay by reviewer Philip Kemp and an archival interview with Ray conducted by Andrew Robinson.

An excellent film with a startlingly good transfer and strong extra features, Charulata is a must, a DVD Talk Collector Series title.