Originally aired in the UK as four separate, 45-minute episodes, "Falcón" is released stateside on two DVDs, presenting the two separate cases revolving around Spanish detective Javier Falcón (Marton Csokas), as two 90-minute cinema quality experiences. Both of the two stories adapted, "The Blind Man of Seville" and "The Silent and the Damned" are based on the novels of the same name by British writer Robert Wilson, who, to date has written four Falcón novels thus far. Having not read the source material, I can't speak to how authentic the adaptations are, but as their own standalone product of the visual medium, this initial offering is a nearly perfectly even split down the road of quality, which isn't terribly shocking given "Falcón" doesn't bring anything new to the crime/thriller table, but it doesn't excuse it for bringing one delicious and familiar entree, followed by a bland follow-up. 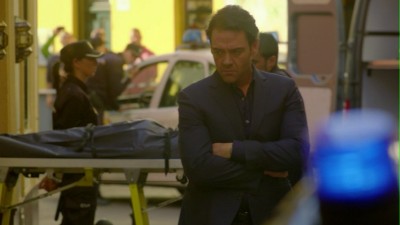 In "The Blind Man of Seville" viewers are introduced to not just Javier Falcón, but the world in which he lives and operates; it's a familiar world at first with all the woes of a modern society, but Falcón's case takes him into a labyrinthine journey into the world of affluence, precipitated by the ritualistic slaying of a wealthy, older businessman. Before Falcón has time to fully investigate the man's much younger widow (Hayley Atwell, nearly unrecognizable in demeanor from her more prominent role in "Captain America: The First Avenger"), does the case take a decidedly personal detour upon the discovery of a strategically placed photo of Falcón's recently deceased father, a seemingly well renowned and respected painter. 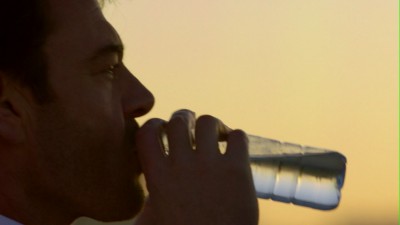 "The Blind Man of Seville" on its own merits nearly warrants a purchase and is a must-see crime thriller in every sense of the word, telling a growingly intricate tale of deception, brutality, and family secrets. The 90-minute runtime is almost too short, although the program does have a slight misstep in the very final moments due to a bit of overly convenient writing. I wouldn't be at all surprised to find those less enamored in the crime/thriller genre to find the denouement off-putting, but the journey to it is so solid, it's easily forgivable. The second adaptation however, "The Silent and the Damned" is an exercise in tedium and in many ways feels skeletally similar to the set-up of "The Blind Man of Seville." 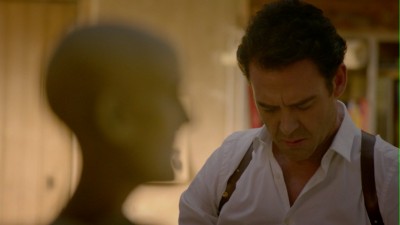 The biggest issue I had with "The Silent and the Damned" is the slight disconnect the viewers have with Falcón himself. With the deeply personal storyline that serves as a co-plot in "The Blind Man of Seville" essentially stripped away, Marton Csokas' portrayal feels like a wasted effort, relegated to little more than rote detective work and butting heads with opposition at every turn. The story also takes a convoluted turn in the later acts and this time around, its less welcome, given what brings us to this point isn't all that interesting; shady CIA dealings with Pinochet are far less intriguing than hidden family secrets. Together this first offering of Falcón is a mixed bag, which is a damn shame, given how strongly the whole affair starts out. Hopefully, should the remaining two Wilson novels be adapted, the stories are more on par with the debut or at the very least, Csokas is given something to do other than play your standard detective.

The 1.78:1 anamorphic widescreen is very crisp and clean, with above average detail and a solid, natural color palette that lends a heightened cinematic feel to both programs. The contrast in dimly lit scenes versus expansive exterior shots is notable and adds even more atmosphere to an all around solid transfer.

The Dolby Digital English 5.1 audio track is a slight upgrade over the also included stereo audio track. The mix is well balanced and there is some moderate surround usage in the program's more expansive set pieces, namely the finale of "The Blind Man of Seville." English SDH subtitles are included.

The extras include a behind-the-scenes featurette on "The Blind Man of Seville," and two short (less than ten minutes each) featurettes focusing on Robert Seville and the Falcón character respectively. The final bonus is a standard photo gallery.

A truly mixed bag, "Falcón" offers an incredibly solid debut episode and minor character study, only to throw it all aside for a dull mystery that is more or less acceptably put together. This is one for crime/thriller fans first and foremost. Recommended.