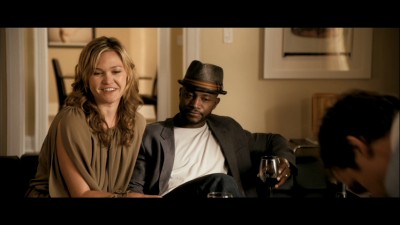 Four college friends meet at two different times over two years. The quartet encompasses two married couples. One, Sharyl and Joel (Melissa George and The Newsroom's David Harbour), tied the knot early and have a child and a home in the suburbs. He works for an ad agency as a photographer and they are fairly well-off as a result.

The other couple have only just gotten hitched. Carlo (Taye Diggs) is a photographer, as well, but one with aspirations in the art world. Grace (Julia Stiles) is studying to be a social worker. On one timeline, the newlyweds are visiting Sharyl and Joel on a layover on the way to their honeymoon destination. On the other, the wealthier couple have dropped by Carlo and Grace's New York apartment to see their newborn baby. The contrast between their two homes could not be more immediately obvious. It's also quickly made clear that the pairs have not seen each other since that last get-together two years prior. Something irreparable occurred between them the last time. Or as they see it, Between Us.

Between Us is directed by Dan Mirvish (Open House), who also co-wrote the screenplay with Joe Hortua, author of the original stage version. The bifurcated timeline allows them to build dramatic tension, stringing the viewer along and setting up a blind alley or two before letting the house of cards topple and revealing the true faces of these Kings and Queens. Their problems are many, encompassing adult expectation, financial reality, addiction, marital strife, parenting fears, religious prejudice, and how one's self-worth is not just defined based on our accomplishments and personal satisfaction, but the judgment of others. 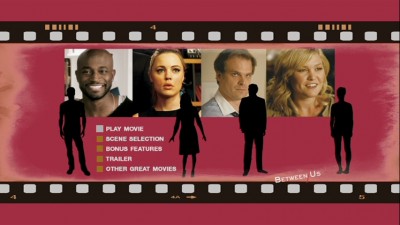 The writing is whip smart, unafraid of tackling difficult situations and realistic enough to accept that not everyone can be a good person all the time. In fact, all human beings are capable of being downright horrible. The ensemble cast jumps into the situation with everything they have, and the four make for great sparring partners, tagging each other in and out of the match, switching allegiances, betraying their own truths. It's to their credit that there is no standout, they are too equally matched, too perfectly pitched by their director.

Most of Between Us takes places in the home quarters. Tight spaces means there is no escape, and familiarity of one's surroundings is just one factor in the emerging contempt. That said, some of the coincidences and contrivances that are essential to making the drama work do come off a little heavy, and the open-ended conclusion means that not much is resolved or revealed. These are really the only complaints I can muster, though they are enough to keep me from really loving Between Us. It just seems like there should have been more to take away from it.

Even so, the work is too good to dismiss completely. Between Us is a secret worth spreading around.

Video:
Released in its original 2.35:1 aspect ratio, Between Us is a good-looking DVD of a good-looking movie. Resolution was sharply defined, and detail looks strong. Blacks are solid with no obvious signs of crushing, and overall, there is no pixilation or ghosting.

Sound:
The movie is given an excellent 5.1 surround mix that has lots of atmosphere, letting little details wend their way through the ever-present dialogue. The music has lots of oomph and in general the mix creates a strong atmosphere of being in the room with the characters.

A stereo mix is also available and the film is Closed Captioned.

Extras:
Between Us is coupled with a strong selection of extras, leading with a joint commentary track with the director and writer, and their director of photography, Nancy Schreiber (It's a Disaster). There is also commentary to go along with the deleted scenes, which is mainly an alternate version of the opening sequence.

A short visual effects reel shows how different scenes were enhanced post-production, while the 20-minute behind the scenes rounds up cast and crew to go deep into the movie.

FINAL THOUGHTS:
Recommended. Between Us is an intelligent drama about grown-ups arguing about grown-up things and sometimes acting like children when doing so. A strong ensemble of four--Julia Stiles, Taye Diggs, Melissa George, and Davd Harbour--embody the two couples that work their way through two separate timelines, tearing at the bonds between them and working through past history. The performances are excellent and the script is smart, even if it doesn't come out to be very much in the end. 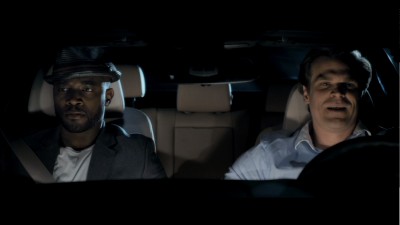