Warner Archive // Unrated // August 13, 2013 // Region 0
List Price: $21.99 [Buy now and save at Amazon]
Review by Stuart Galbraith IV | posted September 17, 2013 | E-mail the Author
Nineteen sixties British fantasy cinema was dominated by Hammer and Hammer-type Gothic horror films, while the much smaller output of sci-fi pictures were usually patterned after Nigel Kneale's Quatermass TV serials and movie adaptations. However, some British (as well as American) sci-fi films from this period were throwbacks to cruder, extremely low-budget movies made by Hollywood's Poverty Row studios during the 1940s. The Frozen Dead (1966) is one particularly loony example. Its tale of a renegade Josef Mengele-type doctor trying to revive the frozen bodies of Nazi elite would have been the perfect vehicle for Bela Lugosi circa 1942 but instead was made in 1966 with fallen star Dana Andrews playing the mad scientist.

As a movie it's quite terrible but certainly deserves points for chutzpah. Its bizarre, anachronistic take on a familiar story is undeniably memorable. In some respects it bridges the gap between fugitive Nazi scientist yarns like She Demons (1958) and living, disembodied head movies like The Brain That Wouldn't Die (1962) and They Saved Hitler's Brain (1963/68) to this peculiar sub-genre's crowning achievement: The Boys from Brazil (1978), the only genuinely good movie of a dubious bunch. And even that one is pretty silly at times.

A Warner Archive Collection release, The Frozen Dead gets a strong 1.66:1 enhanced widescreen transfer with especially good color. Based, presumably on the final product, Warners originally released this to theaters in black and white only, though it later turned up frequently on television in all its Eastman Color glory. 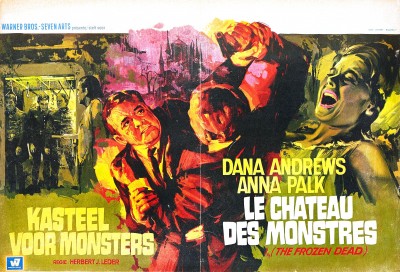 Twenty years after the end of World War II, loyal Nazi Dr. Norberg (Dana Andrews) and his conniving assistant, Karl Essen (Alan Tilvern), secretly working in the basement laboratory of a British "castle" (it looks like an ordinary manor house), have been keeping a dozen high-ranking Nazis in a state of suspended animation until Norberg can perfect the art of revivification. Like frozen uncooked sausages, Norberg warns Essen, the bodies, once thawed, cannot go back into the freezer.

Despite pressure from ex-General Lubeck (Karel Stepanek) and Dr. Tirpitz (Basil Henson), who've got another 1,500 frozen Nazis stashed throughout Europe and Egypt just waiting to be thawed, Norberg's efforts have come to nothing. Though he successfully revived various animals ("and fishes," Norberg adds), every attempt to revive the frozen-solid Germans has come to nothing. Seven previous attempts have restored basic body functions but in each case the process has also induced madness, the subject locked into a specific memory, a moment in time. One bounces an imaginary ball endlessly while another continually grooms his hair. In an early scene, Karl inexplicably takes the madmen for a stroll about the castle grounds, despite the fact that most still wear their original Nazi uniforms. Karl, like an unhappy dog-walker, growls "Schnell! Schnell!" at the mindless men like Gene Roth to the native mutants in She Demons.

Norberg's failures include his own brother, "Prisoner No. 3," now an equally mindless but in this case violent automaton. Alas, the brother is not played by Andrews's real-life brother, actor Steve Forrest, who was in England at the time starring as The Baron. "He looks more like the distinguished actor Edward Fox," I thought to myself. And, amazingly enough, so it was. I guess all actors have to start out somewhere.

Lubeck arrives the very same night Norberg's niece (and the zombified daughter of zombified Prisoner No. 3) returns home from America. Jean (Anna Palk, Tower of Evil) has arrived with college chum Elsa (Kathleen Breck) in tow. "Wait till you see the look of surprise on his face," she tells Elsa. "You'll love him!"

As such films often go, Norberg has also engaged a handsome American scientist, Ted Roberts (Canadian Philip Gilbert), to assist him. Unlike such films, however, Roberts is positively delighted rather than horrified by Norberg's accomplishments: frozen bodies, disembodied arms and internal organs that respond to electrical stimulation and, eventually, the living, decapitated head of Elsa, murdered by Karl (who in turn blames Norberg's brother for the deed).

Suffice to say The Frozen Dead is completely outrageous yet unfolds grimly and without a whiff of self-awareness of its own ridiculousness. For Dana Andrews, star of The Best Years of Our Lives and Laura, among others, The Frozen Dead must have been a bitter pill to swallow. He'd been lucky a couple of times before, starring in good British-Euro genre films like Night of the Demon (1958) and Crack in the World (1965) but here, German accent and all, he's playing a role better suited to Anton Diffring, a part probably even Peter Cushing or Christopher Lee would have turned down and perhaps did.

Despite all, the movie actually has a couple of effective ideas. A co-conspirator is a local German hag (Ann Tirard) who, due to excessive facial scars, including a Scarlet Letter-type swastika branded on her forehead, wears a rubber mask that makes her look no less grotesque. She's well cast.

The Brain That Wouldn't Die is noteworthy for Virginia Leith's talkative, taunting performance as that film's body-less head. In The Frozen Dead, the honor goes to Kathleen Breck as the hapless Elsa. Her subtler, more tortured and mostly mimed performance is actually quite good, in unrealistic surroundings realistically expressing the horror of finding oneself disembodied and at the mercy of loopy scientists. A couple of (stationary matte?) effects shots showing the disembodied head are also well done. And she gets the film's memorable last line, dialogue which, given all the absurdities that preceded it, is admirably haunting.

The Frozen Dead is presented in its correct 1.66:1 widescreen aspect ratio, enhanced for widescreen TVs. Detail, contrast, and blacks all impress, and the film is bright with primary colors, a real loss for that B&W theatrical release. The audio, English mono only with no other audio choices and no subtitle options is likewise strong. The disc is region-free. No Extra Features.

Pretty awful but, for fans of such films (this reviewer included) quite enjoyable as an outrageous, over-the-top throwback and therefore for that demographic Highly Recommended.