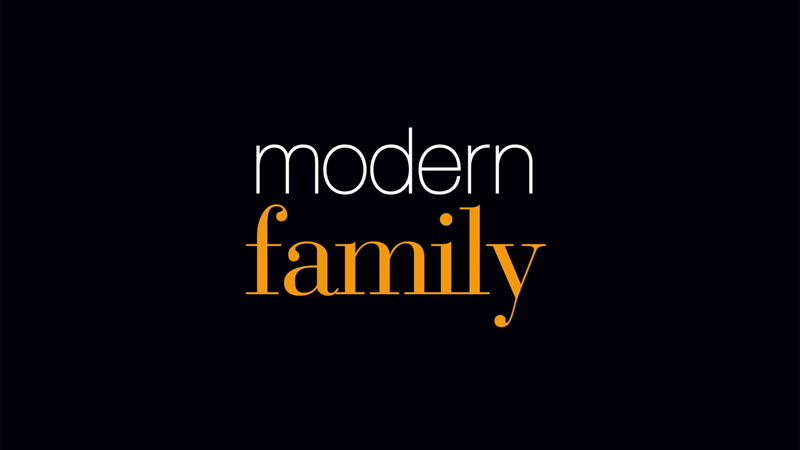 
The Story So Far...
Telling the story of three generations of the Pritchett clan, centered around Jay (Ed O'Neill) and his kids Claire (Julie Bowen) and Mitchell (Jesse Tyler Ferguson), and their respective families, Modern Family was, for all intents and purposes, an instant hit with critics and viewers (earning four Best Comedy Emmys in its first four seasons.) A single-camera sitcom without a laugh track, this mockumentary series (complete with talking head interviews with the family) blends together three types of relationships and the laughs and struggles that come with them, with a heaping helping of heart, to create a genuine feel-good show with a massive amount of laughs. The first three seasons have been released on DVD and Blu-Ray, and DVDTalk has reviews of the releases.

The Show
At this point, Modern Family seems as close to bulletproof as a sitcom can be. Despite a season where long-time directing wizards Jason Winer and Michael Spiller left for other ventures and the show tempted fate with the oft-crippling introduction of a new baby, the series remained in top-form and managed to go four-for-four in Emmys for best comedy series, thanks largely to the show's fantastically choreographed comedy of errors and well-constructed wordplay, both of which are delivered expertly by one of TV's best casts (including the outstanding guests like Paul Scheer, Lanie Kazan, Rob Riggle, Paget Brewster, Nathan Lane, Elizabeth Banks and Billy. Dee. Williams. Playing himself.) Every episode is bursting with perfectly timed dialogue and brilliantly planned visual gags, making it as good as any of the recent wave of smart comedies.

The introduction of a new kid is usually a last-ditch effort on the part of a series to extend the show's life, something O'Neill experienced with the addition of Seven to the Bundy household on Married with Children. It normally doesn't happen when a show is in its prime, as is the case with the birth of Fulgencio, Gloria (Sofia Vergara) and Jay's new arrival. But perhaps the show's producers see the writing on the wall with the three Dunphy kids, Hayley (Sarah Hyland), Alex (Ariel Winter) and Luke (Nolan Gould) rapidly aging out of their teen years (with Gould returning in season five looking and sounding almost as if they recast his part.) That they gave the new kid to the oldest cast member was a smart move, as it should keep Jay from sliding into stasis character-wise, while creating the most conflict, since he's the furthest from his child-raising experience. The new baby also opens opportunities to explore more of Gloria's familial background, like her fiery mother, played by Elizabeth Pena.

While the Pritchetts got their new addition, Cam (Eric Stonestreet) and Mitchell did not, losing out on the adoption they were pursuing at the end of season three. That didn't stop them from making a strong case for lead role status, as their neuroses, and their effect on their daughter Lily, often stole the show. The writers seem to give the couple some of the series' best and best-crafted arguments, while giving Lily several of the season's best lines (which she manages to make funny, despite being one of the least natural child actors on TV.) The main concern with them is one that's been present since the show has started, and that's the reliance on gay stereotypes. The thing is, is this an issue because they are so omnipresent or because as a series that's somewhat pioneered the portrayal of gay couplehood n network TV, it feels so obvious? That there are plenty of gay jokes outside of the Cam-Mitchell dynamic, including a run-in with a lesbian couple (played by Wendi McClendon-Covey and Michela Watkins), Phil accidentally seducing a guy at the gym (Matthew Broderick) and Alex dating a guy of ambiguous sexuality, it can seem a bit of a comedic crutch, but it's also very funny. Perhaps it's best to leave the pearl-clutching to someone with a stake in the argument though and just enjoy the laughs. 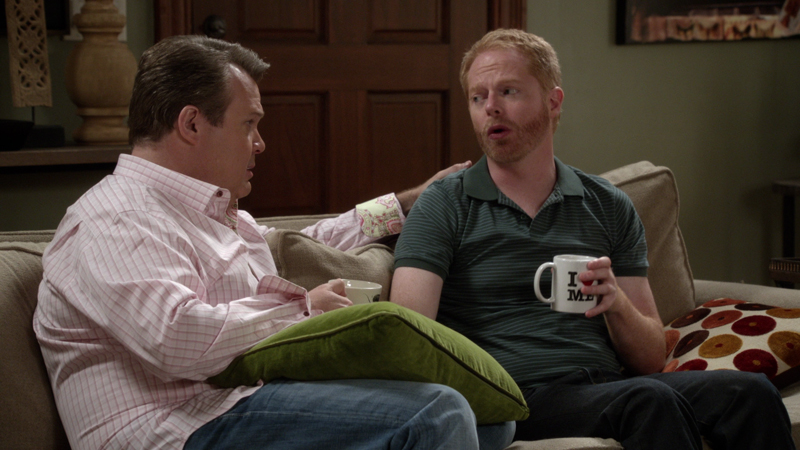 While the show has always had a deft hand at blending comedy and emotion, when it aims for the heart it has an assassin's accuracy. There are two points in this season that exemplify this, the first being the Haley-at-college arc. It seemed like the series would follow the sitcom trope of having even the biggest screw-up kid find their path by sending her off to college, despite all evidence saying that was a task that was beyond her. In a surprising turn though, she has a spectacular flame-out. To this point, the Dunphys have managed to be successful in most of their ventures, but when Hayley becomes a major disappointment, it puts her supportive parents in a bind. It's amazing to see how their relationship is tested and how the normally cheerful Phil (Ty Burrell) deals with it, leading up to an emotional, yet hilarious episode where Hayley starts dating an older man (the impeccably-cast Jason Mantzoukas) which pushes everything to the surface.

The other high-point of the show's emotional balance is the season finale, which dives in from the start with the death of Phil's mother. This serious moment sends the crew to Florida for the funeral, giving Phil a quest from his deceased mom to set up his widowed father, while Alex goes on a quest of her own to figure out her relationship with her grandmother, thanks to a strange gift she was left. In between their journeys, Jay revisits a long-lost fling, Cameron finds kindred spirits amongst the local mahjong grannies and, in the best bit, Mitchell channels his inner "Rural Juror" and helps provide Gloria with a sweaty, Southern defense on a warrant for a prostitution charge. All their stories come together in the end in the kind of touching wrap-up the show has now mastered, even if some may feel it's a bit hacky or cloying at times. It's mostly a case of familiarity breeding contempt. 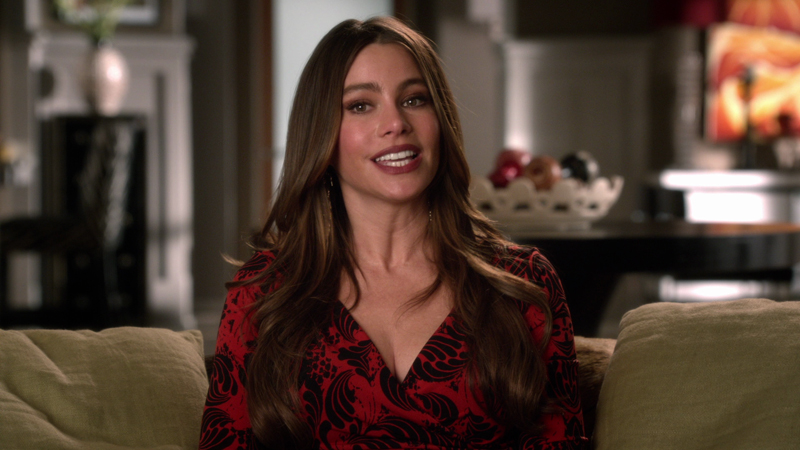 The Discs
The 24 episodes of the fourth season of Modern Family are spread across three dual-layer Blu-Ray discs, which are packed in a standard-width Blu-Ray keepcase with a tray for the third disc. Each disc's animated menu features options to to play all the episodes, select shows, adjust the set-up and check out the extras. There are no audio options but subtitles are available in English SDH, Spanish and French. The set once again includes Season Mode, which keeps track of which episodes you've watched and offers a menu of all the episodes, telling you which disc to put in to watch them. This could be of great value if you could jump from disc to disc in a disc changer, but here it's mainly just informative.

The Quality
The 1080p, AVC-ended transfers are once again excellent, delivering a clean, sharp image full of vivid color. Everything about the presentation works right, from the skintones to the level of fine detail, which is consistently high, capturing the show's varied settings. There are no obvious issues with digital distractions.

The DTS-HD Master Audio 5.1 tracks stays on the same path as the previous releases, with the sound sitting mainly in the center channel, where the character's dialogue lives, while the side and rear speakers pick up the series' atmospheric sound and music. Once in a while, there's a bit more effort in the surrounds (normally tied to louder on-screen action, like Phil and his attempt to ride a motorcycle) but either way the sound is distortion-free and sufficiently powerful to keep the dialogue legible at all times.

The Extras
What is this? Commentaries? After three sets lacking in added insight, we are treated to a quartet of commentaries. Though we still aren't hearing from any of the cast members, we do get a pair of tracks from writers Danny Zuker and Bill Wrubel and two from series co-creator Steven Levitan, who is joined by writers Brad Walsh and Paul Corrigan on one and writer Jeffrey Richman on the other. The Zuker tracks are a bit more lively, driven by Zuker's outgoing personality, but all four are loaded with info about where story ideas came from, structural notes about how the episodes were written and info about the production effort. This is exactly what we've been missing. Let's hope season five brings some tracks with the actors.

It seems like something had to go in order to get commentaries, and the deleted/alternate scenes were nominated for the cut, going from the extensive collections on previous sets to just under seven minutes of excised material in this set. It's not that there's amazing content in these, but it is fun to see more of these characters, especially Phil's alternate video diaries from an awkward ride on Jay's motorcycle. While the deleted scenes are lighter, there is an extended director's cut of the season finale, though don't expect world-changing edits (just some joked that otherwise would have been cut for time.

Several featurettes are also included, starting with "An Addition to the Family" (6:30) which covers the show's new baby via clips and an interview with Vergara. It's not the most enlightening entry, but Vergara is amusing to listen to. For those interested in how the sausage is made, "A Day with Eric" (11:57) will be far more entertaining, as you follow Stonestreet as he shoots the show, from his arrival on the set to his final scene. Much longer than tbe similar piece with Burrell on last season's set, it's a chance for Stonestreet to be his funny self as he guides you through television production and introduces you to some of the people working behind the scenes.

"Modern Family Writers" (13:14) is also quite good, as the show's key writers sit down and share some of the personal moments in their lives that developed into plots for the show. That Zuker returns for this festurette only helps it become the most interesting featurette the show's produced to date. It's certainly better than "A Modern Guide to Parenting" (4:40), which is just a supercut of parenting moments from the show, with no new material.

Wrapping up the extras is a 10:26 gag reel, and it's actually got some funny bits to it, unlike previous such extras. Maybe I'm just a sucker for Julie Bowen dancing though.Your mileage may vary. 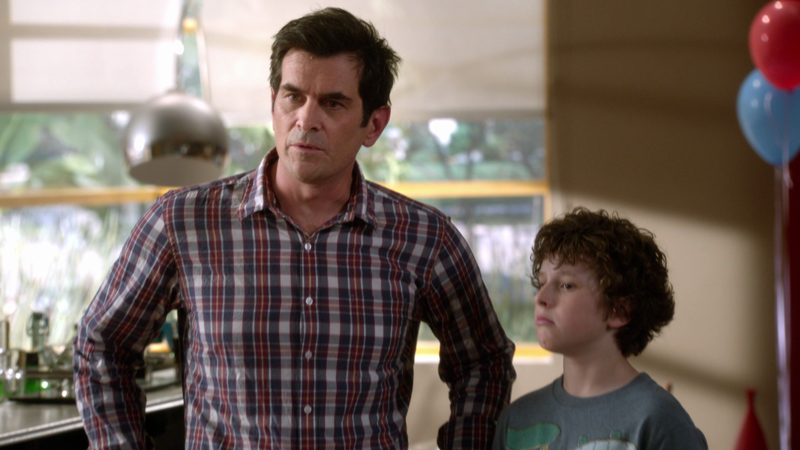 The Bottom Line
With four wins in a row, like the New York Islanders of the early ‘80s, Modern Family is now officially a dynasty, and though the show may at times feel somewhat formulaic, you can't argue with the results, as the show manages to be hugely funny (managing at least one belly laugh per episode,) yet genuinely heartfelt, thanks to some of the best comedic writing on TV. Like previous sets, the quality is high and there's a nice selection of extras, but this time we get some commentaries on top of everything, making it a contender for the series' best release to date. If you're new to the show, go back to the beginning for maximum effect, but for long-time fans, adding this set to your collection will allow you to revisit the Pritchetts again and again.