Honestly, it wouldn't feel like a proper year, if a film like "Unfinished Song" did make its quiet rounds on the small-release circuit before arriving on home video a few months later. The formula, even without knowing a single detail about the plot, is quite simple: assemble some dignified British actors, apply a trite, tired plot and with a bit of luck in the acting department, you get a perfectly serviceable, eventually disposable film for the masses. Originally released in the UK under its original and more logical title, "Song for Marion" (I suspect the US release got a title change to account for the sloppy inclusion of song by Celine Dion sporting a pluralized version of the title), "Unfinished Song" had a blink-and-miss it release in early summer, which frankly isn't shocking, nor terribly unwarranted. 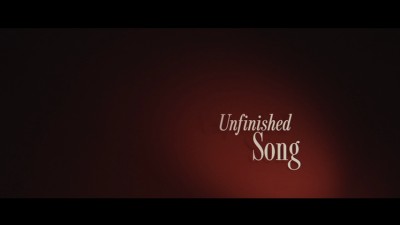 The premise is simple and familiar, Arthur and Marion, a lifelong married couple find themselves coping in different ways over Marion's terminal cancer diagnosis. Arthur (Terrence Stamp) is a devoted husband, despite a grumpy exterior, but grows impatient when it comes to Marion's (Vanessa Redgrave) insistence that she continue singing with her senior choir group, led by Elizabeth (Gemma Arterton). If this weren't enough, the choir isn't merely a place for aging seniors to find camaraderie, in fact, it's one of those quirky choirs you may remember from the documentary, "Young at Heart," that sings modern songs. What that essentially boils down to, is a group of senior citizens eliciting cheap chuckles from viewers singing songs like "Ace of Spades" and "Let's Talk About Sex," and frankly, it's a damn shame, setting an almost entirely tonally flat film in motion, before it hits a near emotional peak midway through via Marion's genuinely stirring rendition of "True Colors" before a local crowd that is more a final goodbye to her husband, than competition piece. 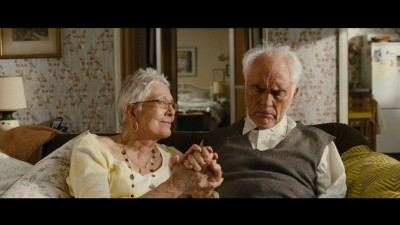 Marion's exit midway from the film is highly telegraphed, but occurs so late that the character arc we're expected Arthur to undergo is little more than a too quickly cooked, watery version of chicken soup: familiar, pleasant tasting, but highly unsatisfying. If it weren't for the obvious acting talents of Stamp and Redgrave, "Unfinished Song" would be a complete loss, with the two actors sharing the film's sole emotionally meaty moment, when an already heartbroken Arthur simply states he doesn't want his wife to go. As quick as this moment comes, it fades into the background in lieu of a hokey, illogical bad-blood subplot between Arthur and his son, James (an entirely wasted Christopher Eccleston), who believe it or not, is a loving doting son to his mother and frankly, the inclusion of the character nearly unravels Arthur's loose character arc. The writer really stretches this clichéd bit of hokum to the extent, before shoving Arthur down the obvious path early in the third act. 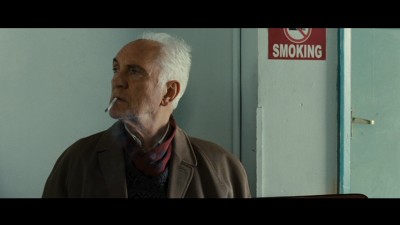 "Unfinished Song" ends exactly as you would expect, hitting every plot note without fail, leaving Stamp holding the ball at the eleventh hour for a great musical solo performance of his own. It's one of those scenes that hits you in the heart, that you might forget how utterly forgettable the majority of what led up to it was. When you distill "Unfinished Song" down to its most potent elements, you get 20-minutes of film. The rest is serviceable, flatly filmed, moderately-acted (Gemma Arterton in particular exists as a nebulous blank slate, embodying every do-gooder who substitutes finding their own path in life for living vicariously through others) pabulum that I wouldn't fault anyone for wanting to experience if they're in the mood for the type of story offered; I frankly was glad I saw the film, but on the same hand, find it in that rare category of competence that I have no desire to experience again.


The 2.35:1 anamorphic widescreen transfer is generally unremarkable, with average to above average detail, very minor artifacting and edge enhancement, and a color palette that has that low-budget natural-ish look, more akin to a TV production than a film.


The Dolby Digital English 5.1 audio track never quite opens up with as much life as it could, with musical sequences being as intense as it gets, but even then, the minimal use of the low-end range is apparent. English SDH and Spanish subtitles are included.


The extras consist of a handful of deleted scenes and an outtakes reel.

"Unfinished Song" might not reinvent the wheel, but its path is so familiar that it might be easy to mistake disappointment at the familiar territory it treads as an indicator of it being a poor quality film. The earnest performances from Stamp and Redgrave earn it a solid recommendation for a solitary viewing. Rent It.