Lady In a Cage

Warner Archive // Unrated // August 27, 2013
List Price: $18.95 [Buy now and save at Amazon]
Review by Stuart Galbraith IV | posted October 18, 2013 | E-mail the Author
Lady in a Cage (1963) is an extremely brutal, even revolutionary thriller, possibly the first truly sadistic movie to be released by a mainstream Hollywood studio. (Many pre-Code Hollywood movies of the 1930s depict Grand Guignol-type sadism, but Lady in a Cage is itself sadistic, a key difference.) Watching it, I kept thinking how genuinely shocked mainstream audiences 50 years ago must have been. Most would never have seen anything like it. Probably many were outright disgusted. Though preceded, if by a matter of weeks, by Herschell Gordon Lewis's notorious if crude Blood Feast and James Landis's excellent The Sadist, those were low-budget independent films receiving limited distribution. Lady in a Cage, on the other hand, was a major release from Paramount, headlined by two-time Oscar-winner Olivia de Havilland. And while Lady in a Cage is usually lumped in with the sub-genre of horror films that began with What Ever Happened to Baby Jane? (1962), of which this has several connections and similarities, Lady in a Cage is far more disturbing. And a lot less fun.

The picture has an intriguing premise but in attempting to balance and/or justify its sadism with social commentary, the film becomes insufferably pretentious and over-written, as well as downright ludicrous at times. Still, in this cynical age of endless Saw sequels, Lady in a Cage is effectively unpleasant and it's intriguing to see such casual cruelty in a Hollywood movie made half a century ago.

Owned by Paramount, Lady in a Cage was first released to DVD in 2005 but that version is long out-of-print. Warner Archive's DVD-R reissue duplicates that bare-bones release, including its impressive 5.1 Dolby Surround mix and original closed-captioning. For those living abroad a word to the wise: Unlike Warner's in-house MOD titles, as well as those they distribute on behalf of Columbia Pictures/Sony, their Paramount MOD titles are region 1 encoded. 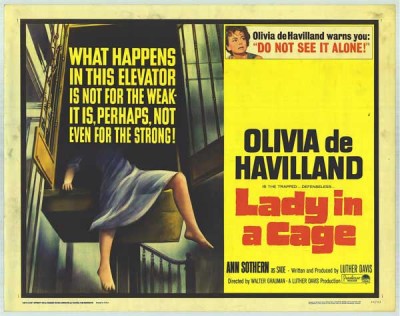 Mrs. Cornelia Hilyard (Olivia de Havilland) is a widow living with her gay son, Malcolm (William Swan) in an expansive, three-story house in Los Angeles. Recovering from a broken hip, the wealthy woman has had a small elevator installed. Malcolm leaves a note for his mother that the audience only partially sees, something about a threat to commit suicide. As he pulls out of the garage, his car accidentally brushes alongside a ladder that triggers a power outage confined only to their house.

The elevator stops between floors and Cornelia is trapped inside the cage-like elevator car. She tries not to panic, but locked in without water in the increasingly sweltering house she triggers the battery-powered alarm. However, the clanging bell in the alleyway behind the house goes largely unnoticed, except by a mentally disturbed wino, George Brady (Jeff Corey). After stealing some wine he approaches petty thief Sade (Ann Sothern) with the idea of ransacking the house, chockfull of valuables. However, violent, fatalistic punks Randall (James Caan, in his official screen debut), Elaine (Jennifer Billingsley), and Essie (Rafael Campos) spot Brady selling stolen goods to unsavory junkman Mr. Paul (Charles Seel) and his assistant (Scatman Crothers), and they decide to rob the place, too.

The various thieves coming and going are in themselves not at all frightening. Jeff Corey, back in films after a decade on the Blacklist, gives one of his rare hammy performances as the eccentric, animated wino while Ann Sothern is merely blousy. Caan, as the leader of the young thugs badly imitates Marlon Brando, and all three youths are generic pot-smoking delinquent stereotypes, the kind of youths Jack Webb would later lecture to on Dragnet 1967.

What's disturbing about Lady in a Cage is the absence of basic human decency, of horrifically violent acts committed in broad daylight (instead of noirish shadows), violence that goes unnoticed by improbably unobservant passersby only yards away. Early on Brady and Sade begin rummaging through the house, steering clear of Cornelia's line of sight. In one scene Sade sneaks up the stairs just behind the elevator, she ignoring Cornelia's pleas for help. Later, the three youths make no effort at all to hide from Cornelia, brazenly robbing the place while simply ignoring her as if she were a caged bird.

Later still, the fatalistic trio decides to murder the older couple for the thrill of killing as much as to eliminate witnesses to their crimes, even knowing or perhaps precisely because of the probable outcome if they're caught: the electric chair. Unlike Brady and Sade, who invade the home purely for the money the stolen goods will bring, Randall, Elaine, and Essie are amoral thrill-seekers, proto-Manson Family types.

(Mild Spoilers) The depictions of violence are not graphic but quite disturbing anyway because of the way they're staged. One murder is not visible as it's hidden behind a sofa. However, a character seated on the sofa, her back to the murder, reacts to mayhem only inches away with such believable terror the effect is quite unnerving. At the end of the film another character's head is half-crushed under the wheel of an automobile. There's an unrealistic absence of blood but the effect is nonetheless gruesomely believable; it's easy to imagine 1963 overcome with nausea.

However, Lady in a Cage almost fatally suffers from playwright-screenwriter Luther Davis's (Kismet, Kiss Them for Me) overcooked script. The films aims to be an allegory critical of a heartless America disconnected from the violent world it has created, but this is outrageously overdone. The film opens with unaccountably heavy traffic endlessly parading past Cornelia's home, despite the fact that she resides on what would seem a quiet side street. (In a 2005 review, DVD Savant speculated that the house was located in Hancock Park, but actually it's at 1132 South Lake Street near the somewhat seedy corner of West Olympic and Hoover.) In the opening scene, an Irish setter lies dead in the road, clumsily foreshadowing what would come later.

Throughout the film, (apparently) police helicopters and even U.S. fighter jets noisily fly overhead while on radios the news is all bad, e.g., death toll figures from traffic accidents, word that "the decapitated nude body of a woman has been found in a cistern," etc. Cocooned from the outside world, Cornelia ponders her lucrative financial investments: "Maybe we should get into armament stocks again," she tells Malcolm, absurdly suggesting that what she suffers through the course of the film is some sort of karma. Redundant voice-over from Cornelia adds nothing: "Stone age, here I come!" she thinks to herself, trying to pry herself free of the elevator's cage.

So sloppy is the script that the ultimate fates of two characters, Malcolm and Sade, aren't even made known.

The imitation Saul Bass opening titles, credited to Tri-Arts, are formatted to about 1.5:1 though the rest of the film is 1.85:1 enhanced widescreen. The black and white transfer is quite good, with lots of detail and good contrast. As with other high-end Paramount releases from the mid-1960s, such as The Spy Who Came in From the Cold (1965), the home video version has an unusually good 5.1 Dolby Surround mix (very effective here when the helicopters fly overhead). It's not clear to me whether this film (or The Spy Who Came in From the Cold, for that matter) originally was exhibited in stereo sound at all, but the mix adds to the experience, in any case. A mono track is also available. Closed captioning is offered but no other subtitle options and no Extra Features.

Deeply flawed and generally unpleasant, but as an ahead-of-its-time cynical, nasty thriller, Lady in a Cage is at times undeniably effective and therefore Highly Recommended.