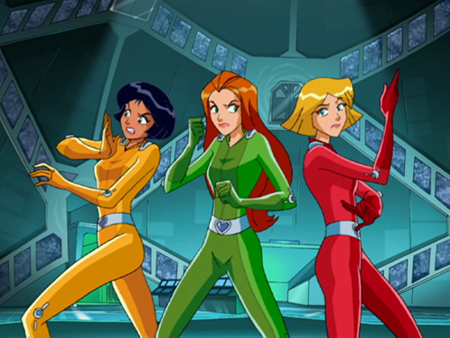 "If I knew I was going to be black and blue, I would have accessorized differently." - Alex, Totally Spies!

Like, whatever. Animated girl-power series Totally Spies! follows three BFFs as they fight crime in slinky catsuits, all while maintaining a "normal" life as boy-crazy, shopaholic Beverly Hills teens. Flatiron Films' Totally Spies! Collection Seasons 1-3 box set collects the first 78 episodes from this candy-colored French production as they were seen on their initial broadcasts on ABC Family and The Cartoon Network in the mid-2000s. Even for fans, that seems like a whole lot of girly-girl action to digest - the company is also offering these episodes in two-disc, half-season sets to be released throughout 2013-14, however.

The titular trio at the center of Totally Spies are Sam, Alex, and Clover, butt-kicking agents for the World Organization Of Human Protection (W.O.O.H.P.). Ordinarily, they're your average gossipy, shopaholic teens attending posh Beverly Hills High - swooning over boys and sparring against their catty arch-nemesis, Mandy. At any moment, though, they find themselves whooshed into the top secret central headquarters for W.O.O.H.P., where their supervisor, British gentleman Jerry Lewis, dryly briefs them on their next assignment. Aided by an assortment of cool gadgets (such as a super-powered hair dryer that can knock out enemies with one blast), the girls travel the globe and battle an assortment of larger-than-life villains. The stories in these first three seasons are usually self-contained, although a few characters like handsome baddie Tim Scam and Britney, another teen W.O.O.H.P. agent, make regular appearances. While the first two seasons follow a predictable yet enjoyable pattern, things get changed up a bit in Season 3 with more outlandish plots, wilder visuals, the girls becoming roomies in a fabulous pad, and the agency's addition of a super-intelligent robot named G.L.A.D.I.S. (an acronym for Gadget Lending And Distribution Interactive System - duh!).

Totally Spies! is kind of unusual in kiddie animation, since it's produced by the French television production house Marathon in a lavish style that owes everything to anime. The Japanese influence extends not just to the visuals (lots of exaggerated freakout gags, the usual Single Giant Sweat Drop whenever someone gets agitated, big-headed, leathery villians straight outta Miyazaki), but also the way it never takes itself too seriously. It's especially evident in wacky, movie-inspired episodes like Season 2's The Yuck Factor, in which Clover, Sam and Alex get miniaturized and pumped into Jerry's bloodstream to fight the evildoers who took over his brain - a la Fantastic Voyage. The outrageousness also works well with over-the-top episodes like Season 1's Passion Patties, in which the spies work together to stop a maniacal woman who manufactures Girl Scout-like cookies which turn its consumers (including Clover and Jerry) into obese, single-minded addicts.

Seen ten years on, Totally Spies comes across as the byproduct of the time when girls were expected to be assertive, princessy, and active in sports - but only in the feminine sports like cheerleading, okay? They come out ahead with Sam as the capable, strong one who usually takes the lead in uncovering clues. Spunky Alex also fares well, bringing the cute and spouting the funniest one-liners. Clover, on the other hand? Total ditz-o-rama. When not obsessing over boys, her looks, or shopping, she's usually derailing the missions with her selfish distractions. It's actually kind of bizarre how they made one of the major characters a flighty, dippy stereotype who is no role model for young girls. Perhaps that's why this show is often criticized in comparison with Disney's similar, concurrent series Kim Possible. If one overlooks that regrettable misstep, however, Totally Spies! has a dizzy sort of charm all its own.

The 12-DVD box set Totally Spies! Collection Seasons 1-3 represents the first time many of these episodes have been released on disc in Region 1 format. When originally shown on the Cartoon Network, Goodtimes Home Video released a few "best of" DVDs containing highlights from these first three seasons. Although flawed, the set remains the best way to view a series which is apparently still popular (currently airing a sixth season), yet mostly absent from American television. 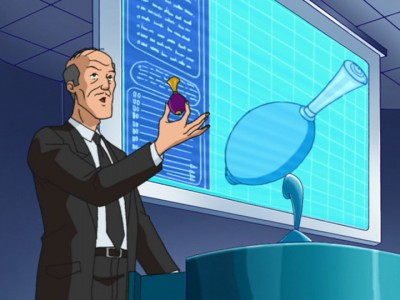 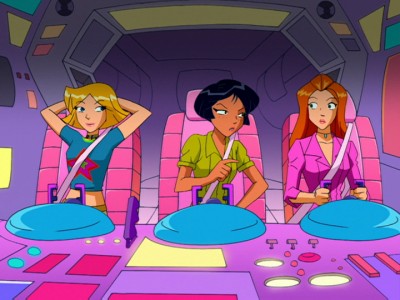 Totally Spies! Collection preserves the eye-popping color from the show's original broadcasts in 4:3 aspect ratio. The very compressed transfer (6-7 episodes on a disc) results in a rough, pixelated image, however. While not horrible to look at, the visual inadequacies make this a set geared towards quantity, not quality.

All of these episodes come with their original stereo soundtracks, which sport decently mixed and clear-sounding dialogue, sound effects and music. The mix is pretty typical of what would be found on recent TV-to-DVD sets, listenable yet average. No subtitles are included.

None. I blame Mandy.

Cartoon Network's mid-2000s hit Totally Spies! somehow mixed Charlie's Angels-style intrigue and Clueless-style tween-isms in a riot of anime-influenced action and wild color. Sure, the girly-girl stereotypes can get overwhelming, but the fun 'n perky action in these first three seasons are decently written enough for adults to enjoy. The twelve-DVD Season 1-3 Collection offers up a whole lot of Clover, Alex and Sam for the completist with a few extra bucks to spare, with merely acceptable picture quality and zero extras. Recommended. 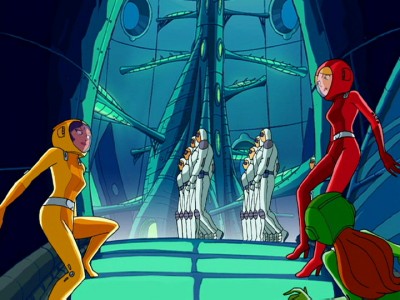 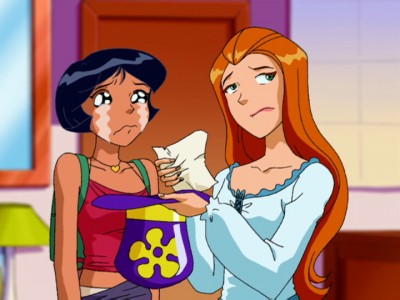