Oliver Stone was 17 when John Kennedy was assassinated in 1963 and in between this incident and his subsequent enlistment into the Army several years later, one could almost trace how the events between his 17th and 25th years of life were so impactful on him in his writing. And his writing and directing in his second careers proved to be impressive with the pseudo-autobiographic work Platoon and his love of the band The Doors.

In JFK, Stone's work would appear to have hit a popular and critical cresting moment in the wave so to speak. Inspired by the Jim Marrs book "Crossfire: The Plot That Killed Kennedy" and Jim Garrison's "On the Trail of Assassins," Stone co-wrote a screenplay with Zachary Sklar which he would also direct. Garrison (Kevin Costner, Safe House) was a District Attorney in New Orleans at the time of Kennedy's assassination, and was still in the role when the Warren Commission's report on the assassination was released. He remained unconvinced from the report and decided to conduct his own investigation as some of the figures appeared to have ties to New Orleans. Beginning with an imprisoned convict in Willie O'Keefe (Kevin Bacon, Taking Chance) and eventually leading to a businessman named Clay Shaw (Tommy Lee Jones, Captain America: The First Avenger), Garrison and his staff interviewed a number of figured tied into the assassination one way or another. Some were a little exotic in David Ferrie (Joe Pesci, Safe House), an erratic figure with ties to Oswald a may have been involved in the assassination plot itself. Another is a mysterious man who calls himself "X" (Donald Sutherland, The Hunger Games). X has ties within the military and intelligence communities in Washington and sheds light on some of those responsible for the plot that Garrison had not remotely considered. This helps Garrison push on with his work and eventually bring charges on Shaw for a court case.

Putting aside the findings and facts of the Warren Report or the scores of those who have documented their own research that contradicts same, and not knowing how clear Garrison's intents were for it, the film would appear to give the impression that the case is a bit of a show trial. It is less about securing a conviction on Shaw because the case is tenuous, and more about bringing the events around the assassination to a more visible spotlight. The trial culminates in the showing of the Zapruder film to the jury, a key moment in (and possible genesis of) scores of theories surrounding a conspiracy since that time, as it was the first airing of the film to the public and eventually reached a wider audience several years later. The time leading up to this moment in JFK, combined with Garrison's closing argument are both electric and emotional moments.

There is little denying the impacts of Kennedy's assassination on Garrison and his staff and how effectively they may be a microcosm on how they impacted the country. And as the investigation progresses, seeing some of the staff's evolution in thinking serve as effective mile markers for the audience that may not have seen the movie before (Garrison's staff is played quite well by Wayne Knight, Laurie Metcalf and Michael Rooker among others). However, it is the moments which precede those points which can be found in the second act that prove to be the biggest fault within the movie. The demarcation point would have to be Garrison's meeting with X. While Garrison is buoyed by the meeting, that he starts to throw virtually everything against the wall with regards to those at fault for the assassination, and tonally the film seems to go from measured and precise assertion to flat out unsubstantiated bluster.

Between the cast that I mentioned earlier and the others who I have not, people who have been nominated for and/or won Academy Awards, the ensemble brings their top shelf game. In subsequent films Costner would tend to overly boss things in a bad way or lose whatever accent he was supposed to inhabit on a movie, but he does not dominate the work, and when it is called upon to act or show emotion, does it convincingly, playing off of his onscreen wife (Sissy Spacek, Get Low) really well as the investigation strains the couple's relationship and threatens the welfare of his family.

If the intent of JFK is to generate discussion or question authority, I can respect it and understand it. When throwing Edward Snowden and the NSA into current headlines, if Stone is looking for the current generation to be skeptical of the actions of past ones then the grander hope he appears to have may be a realization. With the grander scale of things covered, looking at JFK through the narrow prism of cinematic storytelling, it is a very good two thirds of a film, and the last third is addle-minded and takes a little away from the hard work and trust built through the time before it. It remains merely a good film, not a great one.


I have not heard any news of a new transfer that accompanies this new version of JFK, so I will presume that the VC-1 encoded, 2.40:1 presentation is similar to those used in previous releases. Not having seen those prior releases, this disc is generally average-ish when you view it. Color reproduction is faithful, and flesh tones are natural without color pushing. Black levels have moments of crushing but are decent for the most part, film grain is present during viewing, but the overall image tends to suffer from softness and a lack of detail for most of the film. Compared to the standard definition disc there is a slight bump in quality, but one would think with the 50th anniversary of the incident that a 4K transfer would not be out of the question, no?


The disc includes 5.1 surround tracks of the Dolby Digital and Dolby TrueHD variety, and neither have any notable complaint to them. Dialogue is consistently balanced through the feature and requires little in the way of user compensation. While the subwoofer generally does not have a lot to do, there are moments of channel panning and directional effects that are convincing when they are present. The problem is they are not entirely present too often during the film as it is a mostly dialogue-driven film. Overall you will not be blown away by the sonic work on the disc, but it does the work required of it.


JFK includes a bunch of tangible extras and other material to mark the 50th anniversary of Kennedy's assassination, and does so in a box set that is numbered to 50,000. The extras are shown in the picture below but seeing them unfurled is impressive: 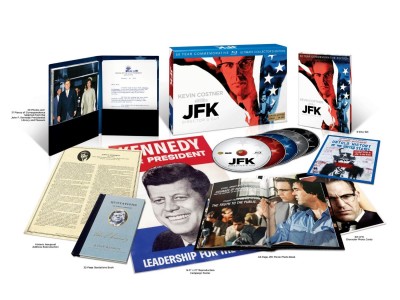 With that said, the disc that houses JFK houses the same supplements that can be found from the 2008 release. You can read about the disc's extras in slightly larger detail here, but in summation the Stone commentary is active, informative and insightful among the other supplements. But with so many discs included in the set, why not break the extras out to another disc? But I digress. This boxed set has no less than four more discs which come with it, starting with PT-109, a biographical war film recounting Kennedy's actions on the boat during World War II (2:20:05). Cliff Robertson (Spider-Man) played the soon to be Commander in Chief, and Robert Blake (Money Train) and Norman Fell (Bullitt) are among the crewmembers on the boat. Presented in 2.35:1 anamorphic widescreen and broadcast in mono, the film is a retelling of the adventures of the boat and its captain and is a straightforward one, with either little in the way of dramatic liberty taken or done under the supervision of the Kennedys, who were involved in some of the aspects of the production. The movie may be a little saccharine, but it is acceptable viewing all things considered.

The next disc is "Years of Lightning, Day of Drums" (1:25:35), which examines Kennedy's work in the years leading up to his death. Presented in full frame video, mono audio and narrated by Gregory Peck, the film looks as his efforts for the space race, his establishment of the Peace Corps, and efforts to reduce nuclear weapons and improve civil rights. The film includes a fascinating amount of color footage of Kennedy both during speeches filmed in various angles to further appreciate his oratory skill, but tragically show the procession and funeral of Kennedy from the White House to Arlington National Cemetery. The film shows the fruits of Kennedy's labor compared with the impact of his death quite effectively, even for a film completed months after his death. Along the same lines, "JFK Remembered, 50 Years Later" (1:30:15) avoids comparing and reveling in Kennedy's accomplishments and focuses on things more linearly, with long stretches of uninterrupted Kennedy speeches, press conferences and the like. Also appearing in 4:3 and mono audio, it covers some of the same ground without a hint of judgment and while lacking the access that "Day of Drums" had is not a bad feature regardless.

The last disc of the bunch is "JFK: To The Brink" (57:50), which is an episode from Stone's "Untold History of the United States" series that airs on the Showtime cable network in the U.S. The Blu-ray disc (with an AVC encode in a 1.78:1 widescreen presentation and DTS-HD MA 5.1 surround audio) starts out effectively and examines the Bay of Pigs, Cuban Missile Crisis, work with Nikita Khrushchev and other foreign matters, but tends to stray and include some white noise into the signal, such as an occasional clip from a Twilight Zone episode. But like the film, Stone throws everything into the realm of possibility of responsible parties for Kennedy's death, and he almost sounds like he is reading an Onion headline in those last few minutes. Feel free to watch it and make your own judgment.

Along with everything else in the set, there is a 32-page book on Kennedy quotations, produced in coordination with the Kennedy Library, that shares his thoughts on peace, democracy, exploration, and more notable quotes from famed speeches he delivered. Next are six character cards with the actor on the front and a picture of the person they are portraying on the back, approximately 4" x 6" in size. There are similarly sized photo reproductions of pictures from the library, centered on Kennedy the sailor, the politician, the husband, father and brother. And a separate section includes reproduced documents from his administration, including a letter from Winston Churchill to Kennedy's wife Jackie days after the assassination. A separate 44-page book focuses on the production itself, and there are separate reproductions of a Kennedy campaign poster and a document which includes his inauguration speech.


The furor surrounding JFK tends to dwarf the cinematic merits of same, which is saying something occasionally as the film is fairly damn good for large portions of it. Technically however, it could use a bit of work, but as far as the bonus materials go few are better. If you have not bought a version of JFK yet this one is the way to go, but if you were thinking of double-dipping, the extras are fairly strong to ponder it, which is a testament to the quality of the set itself.