Partly the film's somewhat disreputable status has to do with the generally poor condition of surviving (or available) film elements. The movie has never looked good on home video, and that's hindered appreciating the film's modest assets. The list of "Special Features" on Kino's Blu-ray state their release was "Mastered in HD from the 35mm negative," but that's an almost meaningless claim. Clearly it's not mastered from the original camera negative but more likely an inferior inter-negative. Clear evidence of this is right there on the disc: an Italian trailer featuring highlights from the film demonstrate exactly how it should look. In every way - sharpness, color, contrast, etc. - the trailer is light years ahead of the feature presentation.

In fairness, the transfer of this presumed IN is pretty decent, an improvement over the image as seen in its last DVD incarnation, part of The Mario Bava Collection, Volume Two from 2007. I was pretty unimpressed with the film when I watched it then, but this time, even via this far from perfect Blu-ray release, I was able to appreciate Bava's efforts a bit better.

The Blu-ray was released nearly a year ago, in December 2012. Heaven knows why they sent us a review copy now. 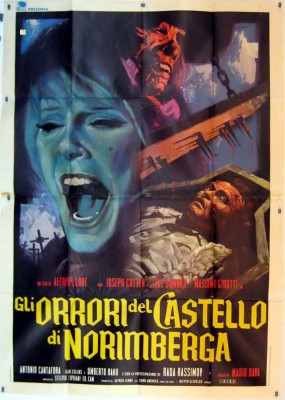 Austrian-American Peter Kleist (Italian Antonio Cantafora) arrives in Europe to visit the castle of his notorious ancestor Baron Otto Von Kleist, an infamous 16th century sadist remembered locally as "Baron Blood" and who, as legend has it, routinely tortured villagers until cursed by a witch. The witched was burned at the stake and the Baron himself died a grisly, similarly fiery death.

Peter lays his hands on two old parchments, one supposedly with the power to bring the burnt Baron back to life, the other to send him back to oblivion. As a lark he invites restoration architect Eva (Elke Sommer) to the castle late that night to read the invocation, but halfway through they get cold feet and send the unseen Baron from whence he came. Later though they try again, only to have a gust of wind blow the second parchment into a roaring fireplace, destroying it. The Baron is revived and the disfigured corpse, dressed in a black cape and floppy hat like Vincent Price's character in House of Wax (1953) wanders into town.

In an amusing scene, his first victim is a doctor who mistakes the Baron for an accident victim, and who actually begins treating his wounds, oblivious to the anachronistic wardrobe. Ungratefully, the Baron murders the kindly sawbones, secretly takes up residence at the castle, kills a few more hapless victims, and eventually locates a treasure chest he'd hidden away years before, one worthy of Robert Louis Stevenson.

With no transformation scene and little in the way of explanation, the Baron takes the more pleasing form of wheelchair-bound Alfred Becker (Joseph Cotten), who buys the estate at auction, though keeps Eva around so that she and Peter can continue snooping around.

The film's odd structure doesn't introduce Cotten as Becker-as-Blood until the halfway point, about 46 minutes in. A third choice after both Vincent Price and Ray Milland turned down and could not accept the role, respectively, Cotten was pushing 70 and had starred with Price in another recent AIP release, the horror hit The Abominable Dr. Phibes the year before. The star of such great films as Orson Welles's Citizen Kane (1941) and The Magnificent Ambersons (1942), Alfred Hitchcock's Shadow of a Doubt (1943), and Carol Reed's The Third Man (1949) Cotten was by the 1960s struggling to find decent film roles, and was in take-the-money-and-run mode by 1970, appearing in the truly terrible Lady Frankenstein, another made-in-Italy horror film, just prior to this.

Baron Blood ran into money troubles and Cotten, similarly stung in the midst of another recent shakily-financed production (the Japanese-made Latitude Zero, 1969), walked off the set, refusing to return until money had been wired into his bank account. Perhaps deliberately, Baron Blood is not even listed in the filmography section of his autobiography.

Cotten may also have refused subjecting himself to any monster make-up, and/or maybe the confusion is the result of Cotten temporarily fleeing the production, or perhaps a double was used simply to save time (and thus money). Regardless, he certainly doesn't play the Baron in his pre-Becker state. They don't even have the same eye color: the gruesome Baron has dark eyes while Cotten's are pale blue, and in at least one scene the Baron's skills also require him to be a quick-change artist, further confusing things. The result is that they almost play like unrelated characters. Except for some sinister looks from Cotten foreshadowing the connection, it's a bit of a surprise when they turn out to be one and the same, if only because the film doesn't tie them together well.

Bava's direction was clearly influenced by Robert Wise's The Haunting (1963); there's even a "breathing door" in one scene that Bava uncharacteristically rips-off. But otherwise his lighting and cinematography in the real Austrian castle, the Museum der Stadt Korneuburg near Vienna, is quite interesting (especially its "burned room," where the Baron originally perished. The director favors slow tracking and deliberately-paced zooming (the antithesis of Jess Franco's schizophrenic, pointless zoom-fests) to generate some suspense, and his lighting of the pre-Becker Baron in scenes stalking Eva (also echoing House of Wax) are colorfully and imaginatively lit, if also derivative.

Baron Blood is presented only in English (with English titles), though it's the complete 98-minute cut of the film and not the edited AIP release which also replaced Stevio Cipriani's score with music by Les Baxter. This isn't necessarily a bad thing, as Sommer and Cotten's own voices are heard. But the decent transfer still sources very inferior film elements (described above), second-generation material and most likely an inter-negative. The region A-encoded disc is 1080p and the mono audio is acceptable, though not great.

For Mario Bava fans, Baron Blood looks a bit better than earlier DVD versions, but not nearly as good as it should. The reasons for this are not clear. The original camera negative may be lost or simply not accessible to the film's current owner, Alfredo Leone's International Media Films. Kino's Blu gives viewers just enough extra resolution and picture quality to appreciate its visuals, but it's still a slightly disappointing release. For genre fans, it's Recommended.