Grindhouse Releasing // Unrated // December 10, 2013 // Region 0
List Price: $39.95 [Buy now and save at Amazon]
Review by Stuart Galbraith IV | posted January 8, 2014 | E-mail the Author
Conventional wisdom used to be that the only good Spaghetti Westerns were the five directed by Sergio Leone: Fistful of Dollars (1964), For a Few Dollars More (1965), The Good, the Bad, and the Ugly (1966), Once Upon a Time in the West (1968), and Duck, You Sucker! (1971). But over the last several decades, film historians including Sir Christopher Frayling began pointing to other unusually good Euro-Westerns made, often but not always, by Italian filmmakers.

One of these is The Big Gundown (La resa dei conti, or "The Settling of Scores," 1966), directed by Sergio Sollima and starring "Mr. Ugly" himself (though actually "The Bad" in Leone's film), American character star Lee Van Cleef. Fans and critics often use the word "epic" to describe it, but what sets The Big Gundown apart from the reportedly 600 Euro-Westerns made between 1960 and 1980 is its very intimacy. Van Cleef and Cuban-American co-star Tomás Milián completely dominate the narrative, which is not quite but nearly a two-character piece. The film is also described as reflecting Sollima's political interests, which turn up in his two other Spaghettis, Face to Face (1967), and Run, Man, Run! (1968), the latter a sequel to The Big Gundown starring Milián but without Van Cleef. However, the political content, while there, isn't quite as groundbreaking as many seem to think it is. Similar themes run through several Leone films (notably Once Upon a Time in the West) and other Westerns before and since. To name one, Richard Brooks's The Professionals, released that same year, has an almost identical plot.

Not one for half measures, distributor Grindhouse Releasing's Blu-ray version consists of two different cuts of the film, the original 110-minute Italian version (in Italian only, with English subtitles), and a 95-minute "expanded U.S. cut" (in English) restoring several minutes of non-dialogue footage not included in the original U.S. release. An earlier German Blu-ray of The Big Gundown restored the full version in a manner similar to what Blue Underground typically does with its European Westerns, giallo, and crime films, which is to simply switch between the English track and the original Italian (with English subtitles) where English audio does not exist. I wish that had been done here as well, but I can also see why Grindhouse might not want to do that, lest they confuse and/or alienate a broader audience averse to reading subtitles.

The set also includes the expanded cut on DVD, the entire Ennio Morricone soundtrack on a CD, a fat full-color booklet, and other extra features. All told, it's an outstanding Blu-ray set. 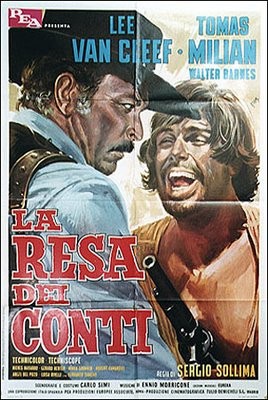 Most of the film follows Corbett as he follows Cuchillo across the boarder into Mexico, the fugitive using every desperate trick he can think of to elude the determined lawman. (Mild Spoilers) Cuchillo claims he's being set up, but also clearly he's no angel, determined to hold onto his freedom whatever the cost. Meanwhile, Brokston and his associates, Prussian marksman Baron von Schulenberg (Gérard Herter) and Brokston's son-in-law, Chet Miller (Ángel del Pozo), gradually reveal themselves to be no better than Cuchillo and possibly much worse.

Corbett's gradual realization that the heartless capitalist Brokston is manipulating him, with Cuchillo as a convenient patsy, is the heart of the film. In one of the extras, Sollima damns Van Cleef with faint praise, saying Van Cleef's great screen presence alone was enough: no acting required or even desired as far as Sollima was concerned. But Van Cleef was a fine actor who understood less was more, particularly against his Continental co-stars and their tendency to overact. He demonstrated he was more than capable of playing sensitive heroes (as in For a Few Dollars More) and lawmen with a strong moral code, as here.

Morricone's score is equally invaluable. Though for my money his music for Once Upon a Time in the West is still his best work in the Western genre, his score for The Big Gundown, particularly his "Run, Man, Run!" title theme (sung by Cristy), may run a close second, even above the more famous The Good, the Bad, and the Ugly.

Filmed in Techniscope, The Big Gundown looks very good on Blu-ray, perhaps not as picture-perfect as the HD transfer of For a Few Dollars More, but it approaches Once Upon a Time in the West and is certainly superior to the Blu-rays of Fistful of Dollars and The Good, the Bad, and the Ugly. This all-region release (the DVD, with the expanded English version only, is also region-free) places the expanded version on Disc 1, the longer Italian cut on Disc 2, with Disc 3 a DVD with the expanded version as well. The mono audio of both cuts is fine also.

A very useful and colorful 22-page booklet offers essays by Joiner and music expert Gergeky Hubai, who also details the cuts made for the American release.

An excellent introduction to the non-Leone Italian Western genre, The Big Gundown is a DVD Talk Collector Series title.