Acorn Media // Unrated // December 10, 2013
List Price: $39.99 [Buy now and save at Amazon]
Review by Stuart Galbraith IV | posted January 3, 2014 | E-mail the Author
Doc Martin (2004-present) returns for its sixth series, its best in a long while. Since 2005, its creators have produced an average of just eight 46-minute episodes every other year. The long gap between seasons and the limited number of teleplays per season has helped maintained the program's appeal, with fans eager to revisit its eccentric, funny and endearing characters. Doc Martin - Series 6 originally was supposed to have been its last, just like Series 5, but star Martin Clunes has suggested the series may continue on yet again, though I wouldn't expect new episodes until late-2015 at least. 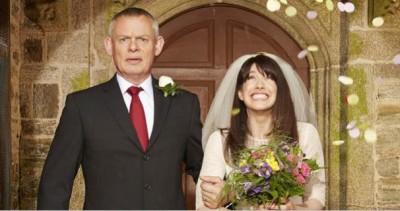 Both Martin and Louisa maintain busy work schedules. Neither is willing to make great sacrifices to their respective careers, and this generates considerable tension in the raising of their toddler son, James. After several disasters they seem to have found an ideal child minder in Mike Pruddy (Felix Scott), this despite his obsessive-compulsive need to rearrange the Ellingham's kitchen. He seems ideal, but Louisa, feeling guilty she's not there to care for James herself, and frustrated by Martin's apparent unwillingness to do his fair share, is obviously troubled.

These various subplots, as well as others in this eight-episode series, are funny and sometimes even quite touching. The on-again, off-again relationship between Martin and Louisa was teased to the point of exasperation by writers who had painted themselves into a corner. To some extent this continues even throughout Series Six, but the show seems to have rediscovered its rhythm.

As always, Clunes's hilarious characterization is at the show's center, almost always scowling fiercely, except on rare occasions when, taken by emotional surprise, a wide-eyed and childlike innocence overtakes him. Martin remains a glowering, aloof presence with no bedside manner or tact. That said, the rest of the cast is fine, too; Catz is charming and a perfect match for Clunes, while McNeice, Cadell, and Absolom are very good also. As with Season Five, the addition of Atkins, who seems to have landed the role after suddenly, unexpectedly departing from Upstairs, Downstairs, doesn't quite work. Where Martin's late Aunt Joan was a hardy, salt of the earth character, grounded in a basic humanity Martin admired but lacked himself, Aunt Ruth is as acerbic and cynical as he is, though less remote and more tactful.

Doc Martin - Series 6 is presented in 16:9 enhanced widescreen, which again shows the picturesque locations (actually Port Isaac, Portwenn is fictional) to good advantage. The eight 46-minute episodes are on two single-sided discs. The Dolby Digital Stereo is up to contemporary television standards, and the shows include optional English subtitles.

Supplements include an informative and interesting collection of behind-the-scenes featurettes, totaling 64 minutes, photo galleries, and the welcome addition of "next time" previews.

As before, I'd strongly recommend those new to the program watch it from the beginning. Doc Martin - Series 6 is funny and charming. Highly Recommended.