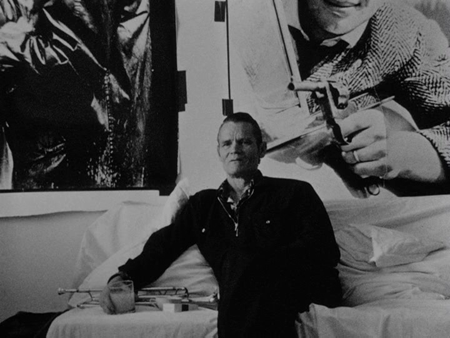 Bruce Weber is a trip.

For the uninitiated, Weber is the fashion photographer who is best known for his erotically charged ad campaigns for the likes of Calvin Klein and Abercrombie & Fitch. His high-gloss images of body worship and retro-fetishism probably shaped the '80s and '90s-era aesthetic more than anyone else in fashion, making him appear as a calculated purveyor of hard-edged corporate sexiness. As with many people who became mega-successful on carefully crafted imagery (paging Martha Stewart), it makes you wonder what Weber is truly like, as a person. My curiosity was further heightened after seeing him in a recent fashion-related documentary, in which the portly, do-ragged photog held court while relaxing on a beach, surrounded by four or five huge dogs, with a phalanx of hunky young men milling about. The fact that he chose to present himself as buddha-like style guru replete with kitschy tableau showing columns A, B and C of pleasurable things (beach/dogs/hunks) provoked a strong reaction of "who the heck is this guy, anyhow?"

Docurama Films' recent release Bruce Weber: The Film Collection, which contains the four feature-length documentaries he directed in 1987-2004, peels away at the Weber mystique. While the set showcases a lot of the glossy gay-kitsch imagery he's known for (no surprise, there's plenty of hunky men, dogs and beaches to be seen), it also reveals a filmmaker of considerable depth and complexity. Of course, his films are all about beautiful things that give pleasure - things that, upon further reflection, uncover facets unexpectedly fraught with tension and poignancy. These films, all collaborations with Weber's business manager and longtime companion Nan Bush, serve as the idiosyncratic, highly personal side projects of a complex man.

Since they were previously available only in Europe, the four-DVD set marks a welcome return to circulation for these documentaries (which make up all of Weber's full-length filmography to date). Broken Noses and the Academy Award-nominated Let's Get Lost haven't been seen on U.S. video since the VHS era, while the later films Chop Suey and A Letter to True make their Region 1 debut here. Although it would have been cool to have a fifth disc containing Weber's short films and music videos, Docurama's nicely packaged set is as good as anything for delving into Weber's unique world of gorgeous people/places/dogs.

Broken Noses (1987; 75 minutes)
The subject for Weber's initial foray into docu-making is Andy Minsker, a happy-go-lucky amateur boxing champ who trains and mentors a group of youths at a gym in his rural Oregon hometown. After a wordy disclaimer explaining how this project came to be, Weber shows Minsker in his element - goofing off with friends and family, being a stern yet affectionate mentor to the boxing kids, answering his duck-shaped telephone, affably prattling on while ironing his t-shirts, etc. Throughout, Weber romanticizes Minsker's corn-fed good looks with dreamy, stylized photography, a soundtrack of vintage jazz music (including Weber's future subject, Chet Baker, whom Minsker physically resembles), and contrived setups such as having Minsker tool around town in a souped-up '50s car. It's all somewhat stylized and off-putting, even somewhat puzzling (why this guy, of all people?), until we get to know more on Minsker's motivations and background in the film's second half. During a conversation Minsker has with his father, we learn that both men were aspiring Olympic athletes who barely missed getting on the U.S. boxing team (dad in 1954, son thirty years later). The longing and regret in those scenes ultimately shifts to hopefulness as Minsky playfully interacts with the boxing students - kids who undoubtedly come from joined families and broken homes similar to Andy's. In the process, Weber upends our typical assumptions on masculinity and brotherhood. 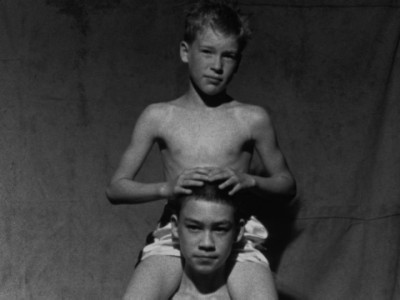 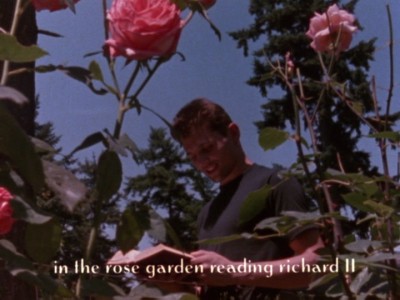 Let's Get Lost (1988; 120 minutes)
With the most acclaimed film in this set, Let's Get Lost, Weber continues his fascination with romanticized youth and beauty by turning his lens to a living legend in jazz music - trumpeter Chet Baker. This portrait follows the same fragmentary, impressionistic style used in Broken Noses (Andy Minsker even makes a return appearance) in surveying Baker's life and career. In many ways, this film was a happy accident - Weber caught Chet Baker at a vulnerable time in his life, when the 57 year-old musician was in a melancholic, reflective state of mind. Gaunt, weathered, and looking much older than he should, Weber contrasts the current Baker with vintage film clips showing a young, handsome and brilliantly talented man. Over the course of the film, we find out more about Baker's musicianship (still in fine voice, he delivers a chilling performance of Elvis Costello's "Almost Blue"), his tangled love life, a string of failed marriages and his continued dependence on hard drugs. Copious atmosphere is supplied throughout with vintage film clips and music - with and without Baker's fragile, boyish and utterly unique singing voice (Chet is portrayed here as a West Coast Jazz version of Elvis Presley, with a similar downfall). Weber applies his usual gloss throughout, including some extraneous scenes of beautiful young people frolicking on the beach - overstated stuff which pads out the film somewhat too much. In the end, however, Let's Get Lost winds up being a perceptive, achingly beautiful study on the costs of success at a young age. 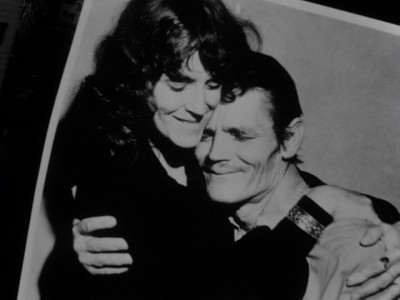 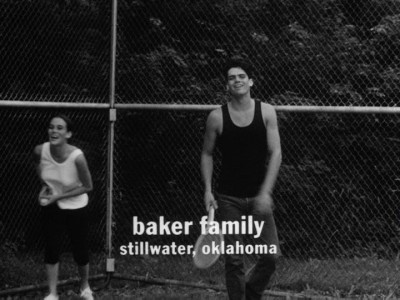 Chop Suey (2000; 94 minutes)
In this shimmering kaleidoscope of a documentary, Weber examines his own influences and favorite things. Chop Suey has the director, in voice-over, ruminating on a mishmash of topics while color and black and white images cascade into each other like a moving scrapbook. In true vanity-project style, Weber portrays himself as a wise elder imparting his wisdom on a young, stunningly gorgeous male model named (I kid you not) Peter Johnson. It all sounds like a perfectly revolting concept for a film, yet - oddly enough - Weber pulls it off elegantly. Not only has his filmmaking technique gained confidence since the first two films, his taste in interesting people, imagery and photography both well-known and obscure is impeccable (viewing this is like leafing through the catalogs of Taschen, the German publisher of fancy books both sublime and sensual). Weber's subjects include the late cabaret singer Frances Faye, who emerges as an ahead-of-her-time force of nature thanks to the warm recollections of Faye's longtime manager and partner. Other quirky individuals emerge: a Brazilian wrestling champ, a family of non-conformist surfers, several photographers that shaped Weber's style, and Robert Mitchum at a 1990s recording session (!) with Dr. John. Somehow, Weber manages to weave these disparate ideas into each other (for instance, a vintage clip of Diana Vreeland chatting about skateboards segues into newer footage of skateboarding kids). Like the shaggy mutt dish it's named for, Chop Suey probably isn't to everyone's taste - as a fragmentary self-portrait, however, it succeeds surprisingly well. 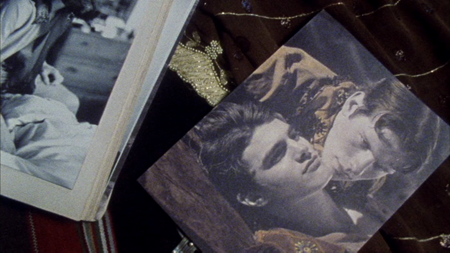 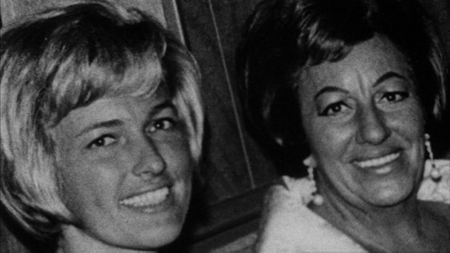 A Letter to True (2004; 78 minutes)
In this rambling quasi-sequel to Chop Suey, Weber turns his attention to dogs and the comfort they provide in stressful times. The opening credits include a roll call of Weber's own brood of animals, the pets serving as a loose framework to hang on another round of Weber's stream of conciousness imagery and thoughts. While the topics that strike Weber's fancy retain their potency (subjects here take on a darker turn, with 9/11, the Vietnam War, AIDS and Haitian refugees somehow included), this film isn't as successful as Chop Suey. Weber attempts to tie all this stuff together by composing and narrating an arty, self-conscious letter to his favorite cocker spaniel, True. Not only does the concept come across as flaky, Weber fails in attempting to tie in his love of pooches with this grab-bag of topics. While it's made with the same compelling-despite-itself earnestness as Chop Suey, A Letter to True lacks that spark that drove the other three films (although there are some lovely poetry passages read by Julie Christie and Marianne Faithfull). For canine fans, Weber included some lovingly photographed scenes of his dogs romping around in the surf - the only thing missing are the hunky guys. 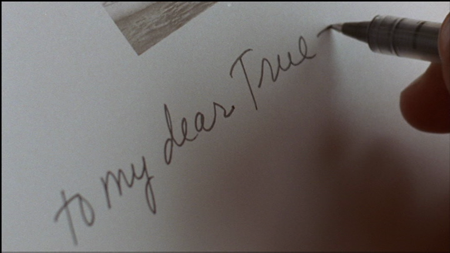 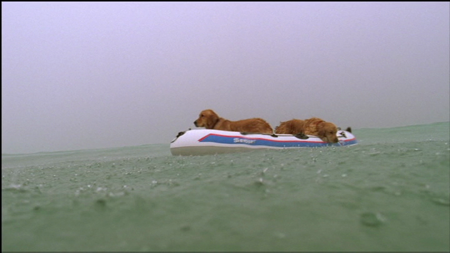 Docurama's release of Bruce Weber: The Film Collection places each of the four films on its own disc, housed in a clear, hinged standard-width DVD case adorned with Weber's photography throughout.

Broken Noses and Let's Get Lost were photographed on older, black and white film stock that gets a good, detailed treatment in these discs' 4:3 presentation. The 16:9 widescreen images on Chop Suey and A Letter to True have a similar, luxe appearance with well-calibrated black and white and vivid (but not overpowering) color. The mastering on all four films is expertly done, bringing out grainy textures and details in the photography.

All four films come with well-mixed stereo soundtracks that serve their functions well. While they don't exactly wow the listener, the heady mixes of lush music (usually taken from lesser vintage sources) and clear dialogue serve as a good counterpart to the imagery. No subtitles are provided.

There's not too much here in the way of bonus content - theatrical trailers are included with Let's Get Lost, Chop Suey and A Letter to True. The set also contains a nice 32-page booklet containing Weber's candid photography, a brief director's statement, and descriptions of the films.

How much enjoyment you'd get out of Bruce Weber: The Film Collection depends on your interest in gloss-drenched nostalgia, beaches, dogs, and hunky men. For a fashion photographer who does docs on the side, though, these four films have a dreamy escapism that remains affecting. Highly Recommended. 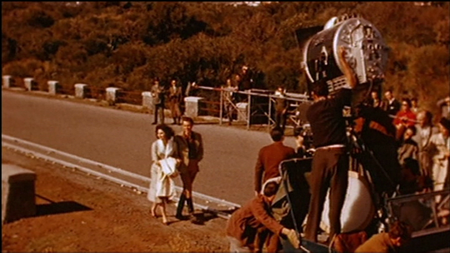 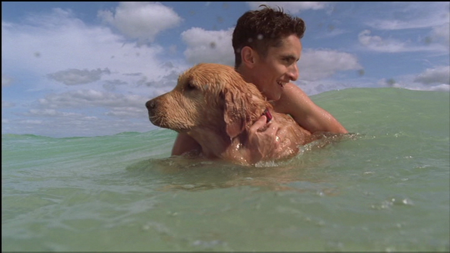