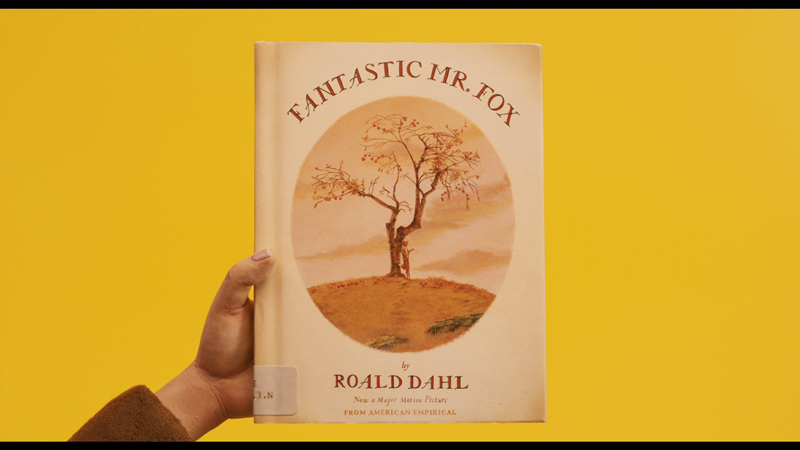 
The Movie
Since the Criterion Collection reset their spine numbers with the DVD release of Grand Illusion, the finest array of films in home video has been completely free of animated feature films. It's utterly appropriate then that the art form should be first represented in the Collection in feature form by Wes Anderson, a man who is practically the personification of the Criterion ideal. Working his way toward 100-percent career coverage by the label, Anderson delivers spine number 700, his stop-motion take on the Roald Dahl classic Fantastic Mr. Fox. The film is his most underrated to date, thanks largely to the absence of flesh and blood in the cast, which is what makes it such a treat on first blush.

Mr. Fox (George Clooney) is a reformed chicken thief, having married Mrs. Fox (Meryl Streep) and become father to awkward Ash (Jason Schwartzman), giving up a life of crime to become a newspaper columnist. However, Fox dreams of escaping his fox life, and the lure of a return to burglary is hard to ignore. So it's not long before he's back at it, hiding his heists from his concerned wife, until stealing from Boggis, Bunce and Bean (Michael Gambon,) three of the meanest farmers around, comes back to haunt him and puts his family, friends and neighbors in peril. Having let everyone down, the ever-confident Fox may have his work cut out for him. 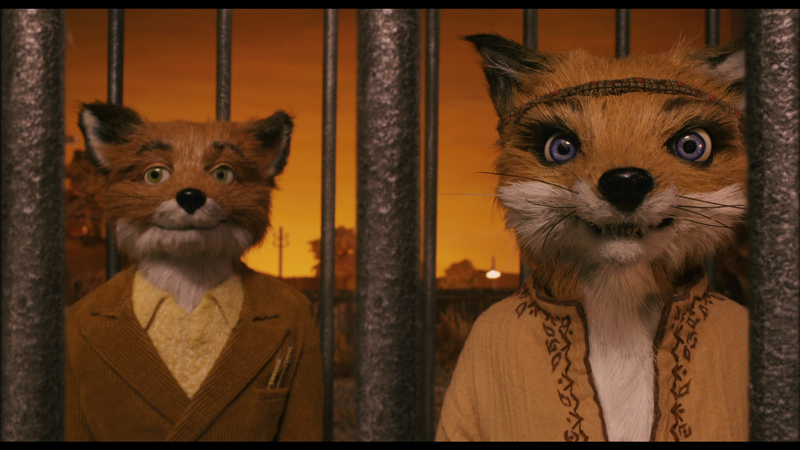 While in no way slavish to Dahl's brief book, having had to add quite a bit to craft a feature film, Anderson (with co-writer Noah (The Life Aquatic with Steve Zissou) Baumbach) is faithful to the feel of the author's work, never betraying the original's characters. The result is a film that tells the same story, just in a bigger, more entertaining way, with far more of the tantalizing human complexity that Anderson has become known for. The other half of his trademark, that being the incredible eye for style and detail that makes his movies identifiable without a word or credit, comes alive in the amazing stop-motion animation throughout this film. Anderson and his collaborators pushed the art form to new levels of believability and depth here, while still looking like the director's handiwork. The charm of the technique makes it the perfect medium for an artist known for his twee style.

Though the film's stars are made of armatures and fur, and the outstanding animation and craftsmanship gives the characters a stunning amount of personality and emotion, it's the actors that give them voice that make the film such a joy. Though many in the cast are members of Anderson's tradition troupe, including Schwartzman, Owen Wilson and Bill Murray, and their performances are expectedly terrific, the newcomers carry their weight as well, with Clooney being his usual amazing self, lending his Fox outstanding range, immense confidence and a humanizing sense of humor that practically forces you to root for him. Streep is just what you'd expect, serving to ground the entire production as the family's cornerstone, while Anderson's brother Eric is perfect as Kristofferson, Fox's all-but-perfect nephew. It's so good, you start to think it's an imitation of a star you know, but realize, it's just a job well-done. 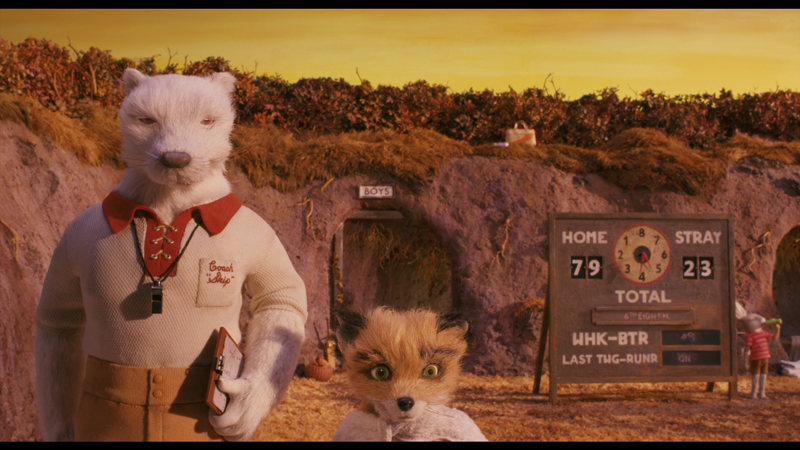 The Discs
Fantastic Mr. Fox arrives on three platters, two DVDs and one Blu-Ray, which are held in a two-tray, two-panel digipak, inside a cardboard slipcase which also contains the accompanying booklet. (All elements of the package are covered in gorgeous paintings by Turlo Griffin.) Two of the discs are overlapped on two hubs on the left side of the case, while one DVD sits on the other side. The simple, timeless Criterion menu gives the choice to watch the film, navigate the timeline, select scenes and check out the special features. There are no audio options, while subtitles are available in English. Once again, Criterion has provided all the extra material in both formats, which necessitated the second DVD.

The Quality
Criterion doesn't go into detail about the 1.85:1, 1080p, AVC-encoded transfer in the accompanying booklet, only stating that Anderson supervised the transfer and Criterion's usual crew handled the mastering, which leads me to believe this is very similar to the previous release, however, since the film has always been in a digital file, it wouldn't require the usual Criterion clean-up. Either way, it's a stunning image that does right by Anderson's trademark focus on detail and design, especially with all the incredible puppet work done in this film. I high level of fine detail and an overall sharp image lets you enjoy all the beauty of the stop-motion characters, not to mention the more subtle touches of traditional animation that appear here and there. The vibrant autumnal color scheme is appropriately reproduced and naturally highly saturated throughout, while there were no obvious issues with digital distractions, though if you get up on top of the titles throughout the film, they look to have some aliasing on the edges. Why are you doing that though?

The 5.1 DTS-HD Master Audio track is clean and crisp, with the cast's voices coming through strong in the center channel. Though there are some scenes of action, this is mostly a dialogue-driven picture. Even so, you'll catch some moments of dynamic mixing that activate the side and rear speakers, and some occasional involvement in the low end, while the soundtrack, as eclectic a mix as any of Anderson's, receives a boost from the surrounds. A healthy, though somewhat quiet presentation overall.

The Extras
First up, the majority of the extras from the previous Fox Blu-Ray have been ported over, with the six-part "Making Mr. Fox Fantastic" getting rejiggered a bit, losing a bit more than four minutes of length and getting labeled here as "Publicity Featurettes." Now, you have

Though at times fluffy and EPK-like, there's some good behind-the-scenes footage here, especially when Murray visits the set to hang with the animators or when we get to see the puppet making, the audio recording or Anderson's unique process on this film.)

(Missing from the previous release is the 1:12 Whackball animated short, the three-minute Fantastic Mr. Fox: The World of Roald Dahl and, oddly, the film's trailer.)

The new stuff kicks off with the freshly-recorded commentary by Anderson, who has not seen the movie in years. Laid-back yet enthusiastic, Anderson has a pile of info to share, including explanations of the techniques used in the film, plenty of praise for the crew, talk of inspiration for many moments, changes from the book and some helpful comparisons between English and American terms. A solid track, though there's some slight dead air on the back end.

New featurettes, titled "The Making of Fantastic Mr. Fox," clock in at a total of just over 32 minutes, and offer more insight into the recording of the actors, further examples of early puppet tests, reference materials, more on-set footage, a look at the film's musical recording sessions with Anderson at Abbey Road and time-lapse photos from the production. If there's anything here that's a must see, it's Clooney and company acting out their parts, which is great to watch. All of it though is well-made (the story told in the set visit in particular) and worth your time, especially all the behind-the-scenes animation material and the photos of Dahl's possessions and their miniature versions..

An introduction by Jarvis Cocker as Petey (1:12) is included. This doesn't seem to be new for this release (you can see it being produced in the featurettes) but it's amusing nonetheless for Pulp fans.

If you're curious how the film compares to the book and don't have a copy, you're in luck with an archival recording of "Roald Dahl Reads Fantastic Mr. Fox" (53:23). Presented in Dolby Digital 1.0 over a still photo, your new British grandfather tells you the story of the Fox family chapter by chapter, in one of those real treats only Criterion provides. There's even more Dahl to enjoy in the 1:43 "Witch's Tree," which sees the author telling the origin of Mr. Fox while sitting in the real tree that gave birth to the story, as well as a manual gallery of a Dahl manuscript of Fantastic Mr. Fox, which offers sketches and some correspondence with his editor. Some of it is not ideal for reading, but it's worth a look.

The Dahl party isn't over though, as there's an episode of the BBC program imagine…, featuring a biography of Dahl, including readings of passages from his work by friends and loved ones. Dahl's life was full of pain and strife (some manufactured by himself) and extremely fascinating, as this 61-minute special attests to.

With the Dahl angle covered, it's back to some found elements, like an amusing stop-motion Xperia ad Anderson directed for Sony (1:01), 50 gorgeous set photos by photographer Ray Lewis (in a manual gallery) and a full-length (75 minutes) animatic for the film, featuring rather detailed illustrations which served as the basis for the stop-motion animation, which is a great inclusion for animation fans.

Also included in this set is a "Discussion and Analysis with Two Students of the Film," who are Jake Ryan and Jeremy Logan. If you want to get into the real deal about this film, including important philosophical and ethical questions regarding Mr. Fox, these 11:27 are where you're going to find your answers.

In addition to details about the release, yet another beautiful 34-page booklet features tons of art and photos from the production effort, as well as an article by writer Erica Wagner, Anderson's 2002 New York Times article on Dahl's home and pages from the White Cape comic seen in the movie.. 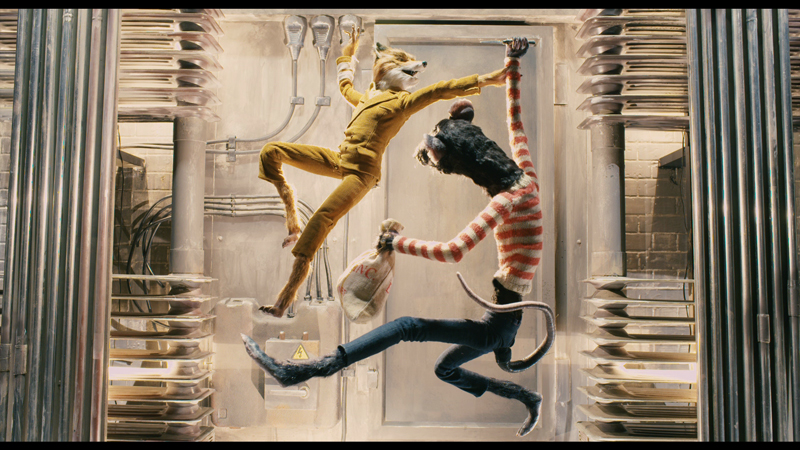 The Bottom Line
If I'm ever disappointed by an Anderson release from the Criterion Collection, it will be a sad, sad day, as they give his wonderful films equally wonderful presentations, and this set of Fantastic Mr. Fox is no exception. Beautifully crafted stop-action animation, an expertly-adapted Dahl book and a spectacular cast add up to a charming film that's almost the anti-Pixar: aimed at entertaining adults, while offering enough cute animal antics to be keep older kids involved. The package Criterion has put together is deep, informative and enjoyable, supplementing a top-notch presentation and highlighting both the movie and its source material. Anderson fans won't need much encouragement, but if you passed on the fuzzy fox movie before, here's your chance to correct that error.