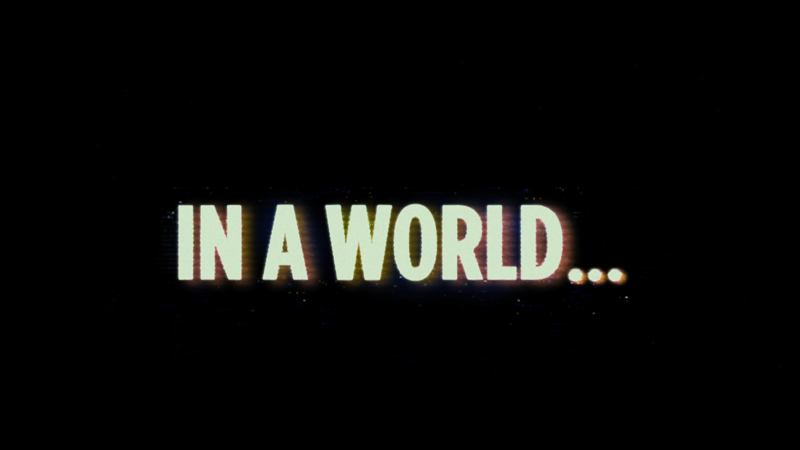 
The Movie
It's pretty rare that I'll go into a movie not knowing much about it, but In a World… is definitely one of them, despite my interest in seeing it. Going in, I was armed with three facts: 1) it was written and directed by Lake Bell, 2) the cast drew several members from Bell's [adult swim] series Childrens' Hospital and 3) it was set in the world of movie-trailer voice-over artists. Beyond that, I was mostly flying blind. I was fairly certain, considering the cast, that it would be funny. I also expected, with the film being set in an unusual little community that it would be quirky, like Waiting for Guffman

Well, color me surprised. I did not expect a serio-comic film about family strife and feminism, with touches of rom-com that breaks stereotypes frequently. Bell plays Carol, a down-on-her-luck voice coach with dreams of making it as a voice-over artist like her father Sam (Fred Melamad), a legend in the movie trailer industry. Living in her dad's house, she's struggled to book gigs, and spends more time capturing interesting accents with her tape recorder than working. When her dad kicks her out to make room for his girlfriend (Alexandra Holden), she suddenly finds herself with a bit of good luck, getting a few jobs and meeting a guy with similar interests (Ken Marino). Unfortunately, as things tend to go in movies, it's not all sunshine and lollipops. 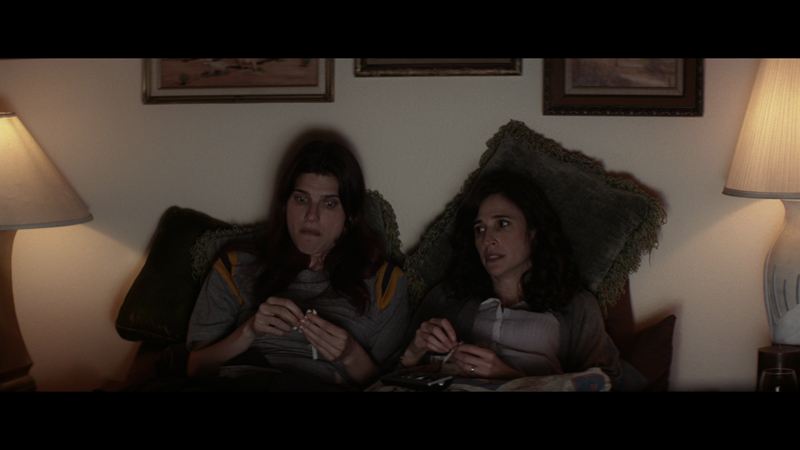 Carol's story, which involves her competing for voice-over jobs in a male-dominated field and dealing with the somewhat unrequited interest of her producer Louis (Demetri Martin), is blended with the tale of her sister Dani (Michaela Watkins) and her film-editor husband Moe (Rob Corddry), whose marriage is a touch rocky. As we move back and forth between the two sisters' lives, with their dad's thread tying them together, the film bounces between tones, at times quite funny, while at other points becoming nearly maudlin. That contrast with the hysterical cast makes it a bit hard to take the film's more dramatic side seriously, though Bell manages to move deftly from laughs to pathos. She also makes some quality choices behind the camera, avoiding the temptation to make the dad's new young chippy into a pure stereotype and handles the movie's feminist themes in a way that's steers clear of fairy-tale idealism. The third act is a touch by-the-book, but it's enjoyable in a traditional way.

In a development that becomes less surprising with each passing day, the performer who stands out the most here is Corddry, who, once again, is funny, yet touching. His everyman charm works for both sides of the equation, as his quips and reactions are hilariously down-to-earth, and his pain is agonizingly relatable. That's sort of the story for most of this film's supporting cast. Though I'm in no way a fan of Watkins, she works as part of a couple with Corddry, while Martin is the kind of goofy romantic male lead you don't often find in films. Meanwhile the crew at the recording studio, including the efficiently funny Tig Notaro, a surprisingly lightly-used Nick Offerman and the revelatory Stephanie Allynne, who impresses as the awkwardly energetic Nancy. When the story wanders a bit and has trouble finding its way to a satisfying ending, the cast keeps things moving and entertaining. 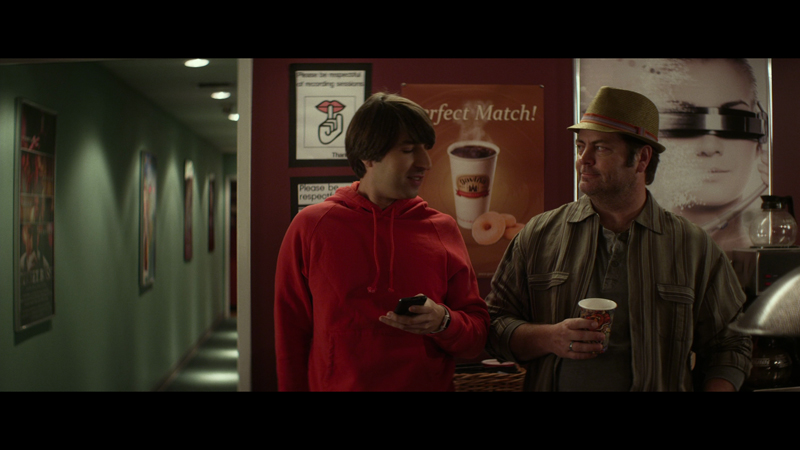 The Disc
This film arrives on one disc in a standard-width BR keepcase. The Blu-ray features a static menu, offering the option to watch the film, select chapters, adjust languages and check out the extras. Audio options include English and French DTS-HD Master Audio 5.1 and Spanish Dolby Digital 5.1 tracks, while English, English SDH, French and Spanish subtitles are available.

The Quality
The 1080p, AVC-encoded transfer is good, if a touch uneven, living mostly in the dim light, though the color is appropriate, with Martin's well-handled bright red hoodie being the extreme of the hues. The level of fine detail is good, but not great, with the image looking a bit soft, unaided by the general sense of darkness in the film (Bell even complains in the commentary about a visual not working because you can't make out what's on-screen clearly.) There are no issues with compression artifacts or any other digital distractions, but there was an odd clarity to certain moments, as if motion smoothing was applied. (I double- and triple-checked my settings, and it wasn't on.)

The DTS-HD Master Audio 5.1 audio is implemented well in a film that doesn't feature a lot of audio effects, but since the movie centers around voiceover, they had to get this right. The dialogue is cleanly legible from the center channel, while the side and rear speakers enhance the score, along with delivering some sound effects. There's some nice off-screen placement and directionality in the mix, but with a dialogue-powered dramedy like this, the opportunities for aural dynamite are few.

The Extras
The extras start with a solo audio commentary by Bell, who does a nice job of keeping the track moving, mixing on-set stories with the tour-guide style of a first-time feature-film director. Bell is fun to listen to, bringing a good energy to the track and leaving no dead air.

Nine deleted scenes run a combined 14:23, and feature an alternate opening scene, full-screen footage from some of the TV shows and movies seen in the film, and an assortment of other scenes that flesh out the Moe/Dani relationship. The alternate opening is rather good, while the scenes from the show, a sexy baby-voice parody of The Bachelor, are a bit hard to sit through (just like the real show.) They are followed by a brief (3:57) gag reel, which offers a montage of screw-ups and goofing off, dominated by Corddry, with a tasty helping of Offerman improv.

A collection of six promos for the film (5:20) centers around the voice-over concept and features several characters from the film in fun, silly segments. The extras wrap with a selection of Sony trailers. 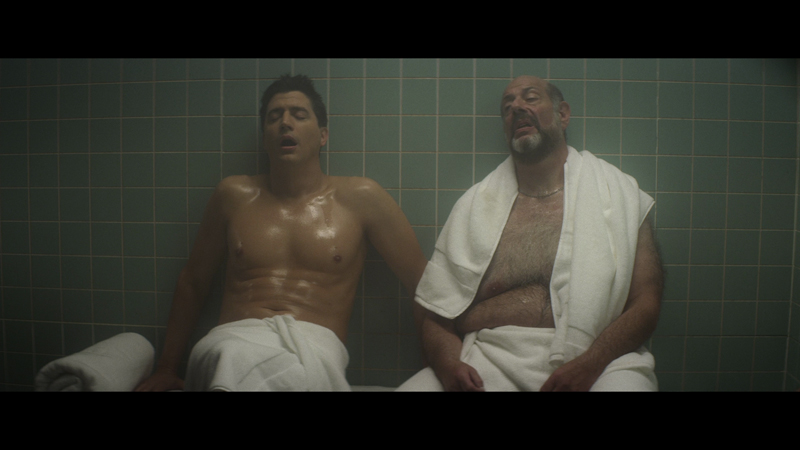 The Bottom Line
I expected something funnier when I saw the cast and setting of In a World…, but even if it isn't a laugh riot, Bell's done a great job of giving us a well-balanced peek inside a fractured family, while making a semi-statement about gender equality as well. The disc looks and sounds good and offers a decent set of extras to supplement the film. In a World… is an enjoyable feature debut and lets you enjoy some excellent performances, making it worth checking out if you keep your expectations in check.