Horn Blows at Midnight, The

Warner Archive // Unrated // November 13, 2013 // Region 0
List Price: $21.99 [Buy now and save at Amazon]
Review by Stuart Galbraith IV | posted January 5, 2014 | E-mail the Author
For years after its release, The Horn Blows at Midnight (1945) gained a certain notoriety as the butt of comedian Jack Benny's self-effacing jokes. But while the movie was indeed a financial failure and Benny's last starring film, it's not nearly as bad as his jokes about it would suggest. Indeed, while not quite an unjustly maligned comedy masterpiece, The Horn Blows at Midnight is quite funny and original on its own terms. There have been scads and scads of comedies about people going to heaven and/or heavenly angels visiting earth, but this film adopts a wonderfully screwy, unique approach that works extremely well most of the time.

A Warner Archive manufactured-on-demand DVD, The Horn Blows at Midnight is presented here in a nice, clean transfer that allows viewers to fully appreciate the film's often spectacular visual effects. 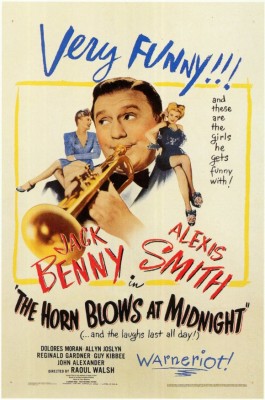 Like The Wizard of Oz (1939), The Horn Blows at Midnight opens and closes with a framing story, with most of the film a dream-induced fantasy populated by the same actors as in the framing material, but playing different roles. Here, Athanael (Jack Benny) is the third violinist in a radio show orchestra, on a program sponsored by Paradise Coffee. During a commercial the show's announcer, promoting Paradise as "the coffee that makes you sleep," Athanael himself drifts into Slumberland.

Dreaming, Athanael is suddenly an angel junior grade and trumpeter in a voluminous heavenly orchestra (a neat special effect as grand as anything in Powell-Pressburger's subsequent A Matter of Life and Death). At the urging of angel girlfriend Elizabeth (Alexis Smith), Athanael is assigned by the deputy chief of Small Planet Management (Guy Kibbee) to destroy a pesky, sinful planet, the Earth. "Hello, Salvage?" the Chief barks into a telephone, "Be ready to pick up a load of scrap at midnight!" Via an express elevator leading to a (presumably) New York hotel, Athanael is charged with blowing Gabriel's horn at midnight precisely, setting into motion earth's total destruction.

On earth, however, Athanael's plans are initially thwarted, first when he saves the life of suicidal Fran Blackstone (Dolores Moran, gorgeous), the accomplice of gentleman thief Archie Dexter (Reginald Gardiner), and by two fallen angels previously assigned the task, Osidro (Allyn Joslyn) and Doremus (John Alexander), now living it up as playboy mortals.

Unlike Benny's more famous starring films, which generally have him playing slight variations of his familiar radio persona, including Ernst Lubitsch's To Be or Not to Be (1942), which cast him as an insufferably vain thespian, in The Horn Blows at Midnight Benny plays a wide-eyed innocent.

It's a funny characterization, with Benny casually but helpfully advising mortals he meets on earth not to bother themselves with pointless dinner reservations or to concern themselves with unresolvable personal problems, for it will all become moot within a matter of hours. Benny plays this black humor as an earnest attempt to be friendly, and with zero malice, to the point where such encounters become funny instead of grim. Overall, the movie less resembles other fantasy comedies concerning angels than it does Max & Dave Fleischer's amazing cartoon short Ko-Ko's Earth Control (1928), which had a similarly lighthearted attitude about the complete destruction of the earth.

Similarly, in one of the film's best scenes Athanael wanders into a restaurant, curious to experience food for the first time. He orders a nauseating array of items (a chocolate sundae, dill pickle, herring, etc.) from waiter Lew Proplinski (John Brown, the actor later blacklisted and reduced to providing the voice of Robot Monster). When he finally brings Athanael the check, the angel matter-of-factly explains he has no "Dah-lahs" (as he calls them) to pay the bill. Benny is so sweet in this scene that Proplinski doesn't even get particularly angry because clearly Athanael has no concept of money. In another, equally funny scene, Athanael gets a job with a jazz band playing to a house of jitterbuggers. ("I must tell St. Vitus about this," Athanael remarks.) He gamely imitates his fellow musicians but the musical form is completely alien to him. Benny's sincere efforts to fit in with the rest of the band are priceless.

The film's script, credited to Sam Hellman and James V. Kern, the latter an attorney-turned-singer-turned-songwriter-turned-screenwriter-turned-TV director (of innumerable I Love Lucy, Jack Benny Program and My Three Sons episodes), based on an idea by Aubrey Wisberg, and improbably directed by Raoul Walsh, is crammed with wild concepts. The climax has most of the characters dangling from a high building, with Athanael eventually swept up in a giant mechanical billboard for Paradise Coffee, where he nearly drowns in a bathtub-sized coffee cup. It probably wasn't a direct inspiration for the climax to It's a Mad, Mad, Mad, Mad World (1963) but the two are remarkably similar. And while Franz Waxman wrote most of the film's score, the climax was written and orchestrated by Carl Stalling, the composer best known for scoring Warner Bros.' famous cartoons.

The picture has many other qualities: the ingenious reuse of almost the entire cast, playing musicians, technicians, and sponsors in the radio broadcast, all playing other characters in the fantasy middle section. (Reginald Gardiner as the composer-conductor and Mike Mazurki as a bassist in the radio orchestra, as respectively the gentleman thief and his henchman in the main story; Marx Bros. straight woman Margaret Dumont as a prima donna soprano on the radio show, a dowager later on, etc.) At one point Athanael spots an angel wearing heavenly robes walking down a busy sidewalk, but he turns out to be a carrying a signboard advertising a reissue of Angels with Dirty Faces at a local theater! And, at just 78 minutes, the busy film never wears out its welcome.

So why did it flop? Ill-timing, perhaps. The picture was released barely a week after the death of President Roosevelt, and as audiences anxiously awaited word of the war's end in Europe. Maybe even an overt comedy about heaven, angels, and the destruction of the earth rubbed audiences the wrong way at that time.

The region-free The Horn Blows at Midnight, a Warner Bros. production and release, looks great for the most part in its 1.37:1, black-and-white transfer. Some of the reels are in better shape than others, but for the most part the image is impressively sharp and it's easy to explore details in the film's fantastically elaborate miniatures depicting heaven and those built for the wild slapstick climax. The Dolby Digital mono (English only) is also fine. The lone Extra Feature is an original trailer, featuring Smith and Moran in footage shot specifically for that purpose.

If I were a programmer at a reparatory film house, I can't imagine a more surprising and delightful double-bill than The Horn Blows at Midnight and It's in the Bag (1945, starring Fred Allen but also featuring Benny), with maybe Ko-Ko's Earth Control tossed in for good measure. A delightful comedy, this one's Highly Recommended.