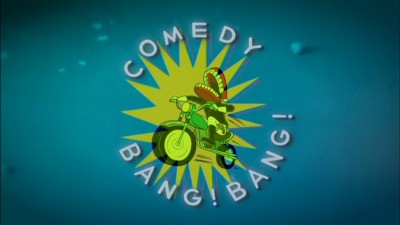 Reviewer's Bias*
Loves: Comedy Bang! Bang!, alt comedy, podcasts, Paul F. Tompkins
Likes: The vast majority of the cast
Dislikes: When an episode is over
Hates: The lack of Womp-ing going on


The Show
There will come a day when the creatively-bankrupt studios will turn to podcasts for movie ideas (if they haven't already.) Until then, TV is way ahead of the curve, bringing podcasts to the small screen, like Marc Maron's IFC meta series Maron, HBO's animated take on The Ricky Gervais Show and Chris Hardwick's ever-expanding Nerdist empire. One of the best adaptations has been the TV version of Scott Auckerman's Comedy Bang! Bang! podcast, which takes the spirit of his absurdist interview series and turns it into something like a grown-up Pee-Wee's Playhouse, while still integrating the celebrities and characters that make the podcast so enjoyable.

Whereas the podcast features a chitchat with a comedy (or comedy-friendly) star and their run-ins with a variety of unusual characters (along with an occasional musical guest), the TV show is a spoof of a traditional talk show, with Scott Aukerman playing the host of the show, while the uber-creative Reggie Watts serves as the one-man-bandleader. While the celeb and character interactions remain somewhat similar to what's on the podcast, the usual segments, like "Would You Rather?" and the plugs, are replaced by an assortment of absurd games, like "What is Their Ailment?" and "What Do These Initials Stand For?," along with a number of askew TV magazine-style bits like "Tsk-Tsk Attaboy" and silly stuff like a prize patrol outing that becomes a Law & Order parody. 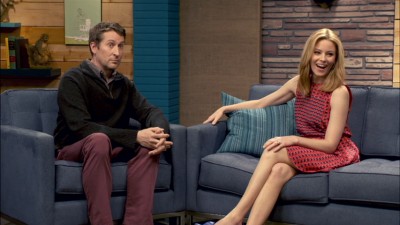 Aukerman's interviews with his guests are the key to the show though, with vibe-friendly celebs like Amy Poehler, Zack Galafianakis, Jon Hamm and Adam Scott, among others, playing along with the concept. With just 10 episodes, there's no opportunity for a weak guest. Meanwhile, several of the best guests from the podcast made the transition to the TV show, including theatrical director Don Dimello, reality star CakeBoss (CakeBoss, Broadway legend Lord Andrew Lloyd Webber, Spanish DJ El Chupacabra, California TV icon Huell Howser and the strange Bob Ducca. If you've never listened to the podcast, these interviews are often hilarious, as conversations with these larger-than-life personalities can go anywhere, and normally the destination is wonderfully off-the-rails. Coincidentally, comedians Andy Daly, Paul F. Tompkins, Nick Kroll, James Adomian and Seth Morris also make appearances, along with a host of alt-comedy greats making cameos, like David Cross, Bob Odenkirk, Matt Besser, Will Arnett, Will Forte, Thomas Lennon, Chris Parnell, David Wain and so many more.

The show's tone is fluid, as it can be supremely silly one moment, as seen in the talking props around the set, but can quickly turn darkly comic, evidenced by the evisceration of one character. It also can be very conceptual, trying things that might not have worked in other formats, like an episode-long joke about greenscreens, or a long time-lapse sketch about painting. The chemistry between Aukerman and Watts powers everything though. Watts, a supremely talented improvisational musician, raises the traditional role of the talk show bandleader, even on a fake talk show, participating in bits and shorts, including a ridiculous movie trailer that works solely due to Watts' presence. It was important that he could carry some of the weight, with Aukerman mostly playing a straight-man role, and this season proves he's effective as one of the show's leads. 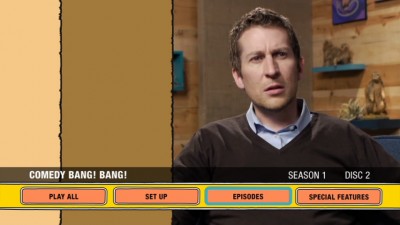 The DVD
The 10 episodes of the first season of Comedy Bang! Bang! are on two DVDs, which are packed in a standard-width keepcase with a tray for the second disc. The DVDs features animated, anamorphic widescreen menus with options to play all the episodes, select shows and adjust languages. There are no audio options, though subtitles are available in English SDH and Spanish.

The Quality
The anamorphic widescreen transfers on this series are solid, with appropriate color and a decent level of fine detail, though they are certainly not nearly as sharp as the show looks in HD. The ninth episode, which was the first made, is softer, a touch darker and with slightly duller color, but the others are of a higher quality. There are no noticeable concerns about compression artifacts or any other visual negatives.

The Dolby Digital 5.1 audio tracks are clean and clear, with good separation between the dialogue, music and sound effects. The dialogue lives in the center channel, while the side and rear speakers offer support for the score and Watts' outstanding ditties.

The Extras
Each episode here has an audio commentary by Aukerman. It's a bit confusing though, because they are listed on the menu as featuring famous people like Tompkins, Andy Daly, Jon Daly, Kroll and Morris, but it's just Aukerman, who, while trying to share details about the making of the show, gets interrupted by guests like CakeBoss (CakeBoss), Lord Andrew Lloyd Webber, Don Dimello, saxophonist Barry R, El Chupacabra and Bob Ducca. Sure, they feel like half-hour episodes of the CBB podcast, but one just keeps hoping that we can spend a whole commentary with just Aukerman, so we can learn more about the title animation, the lenses used and other important information.

Five deleted scenes (6:00) feature some ideas that were cut from the show. Two of them are games, "Ring It or Ding It" and "Are You More Sexually Experienced Than a High School Senior?," which somehow manage to be more ridiculous than the bits that made it onto the show, an impressive feat to be sure. Continuing on the cut-footage theme, nine alternate celebrity interviews are included, running nearly 45 minutes in all, with Adam Scott being the only guest not included. There's a few fun bits in here, and they are all quite different than what made it into the episodes. Then we get a brief (:48) alternate opening with an audition concept. The final animated opening titles are so iconic that this couldn't possibly compete, but it's interesting to see nonetheless.

A couple of supercuts are up next, starting with a run of Insults (1:06) from one of this season's fake films. These improvisations are amusing, but they don't really go anywhere. Far more interesting is the almost 16-minute edit of all of Watts' musical intros and outros from the series. The creativity he puts into these little gems of audio is amazing, and to hear them all in a continuous flow is just wonderful fun.

Though Aukerman didn't get to share as much behind-the-scenes info during the commentaries as he might have liked, a run of test shots for the show's special effects by director Ben Berman gives you an idea about the show's evolution. These rough versions of the visual gags are an interesting look at the thought process that went into the series.

Promos make up the remaining extras, including an IFC promo (:35) and the Ultimate Teaser Trailer (1:34.) I never saw the trailer before this DVD, but it is an absolutely perfect parody of blockbuster film trailers featuring the guests and characters from this season. If I wasn't already into the podcast, this would have made the series a must-watch. 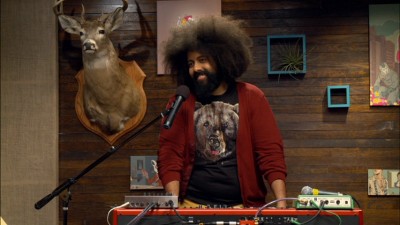 The Bottom Line
Thanks to its quirky, absurdist sense of humor, Comedy Bang! Bang! isn't going to be everybody's cup of tea, but the show's happy-go-lucky, silly tone and the incredible roster of guests make all the wackier elements more accessible than they might be otherwise. The quality is solid and there's a ton of bonus content, so fans of Scott and Reggie's funny playhouse can put down their money with impunity.