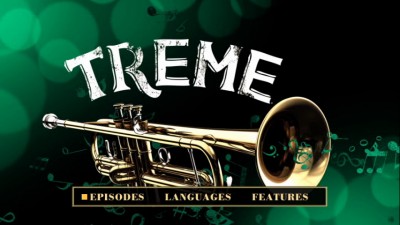 There is a certain futility, the morning after watching the final episode of Treme, in sitting down to write about the show. Also a certain melancholy seasoning my oatmeal, and an elation to match the jolt of my Sunday coffee. The sadness is that it's over, the happiness that it ended so well, and the frustration that many of you reading this are coming to the show a little too little and a little too late.

Fans of Treme will know what I mean. For four seasons we've tried to hip our friends to the program. We've had to sound out the title for them ("It's spelled like 'treem' but it's pronounced 'treh-may'") and reassure the impatient that there was plenty worth sticking around for ("I bet you didn't know what to make of The Wire at first, and this is by the same guy that did The Wire"). There was always a feeling that the powers that be were going to take this one away from us, that David Simon and Eric Overmyer and their writers room and their directing pool, by not making it easy, were making it too good, and so there was no way it would last. In banking, you're too big to fail; in the old rules of television, too smart to succeed. Even in this new golden age of Breaking Bad and Mad Men, David Simon still somehow manages to have a little too much brass.

In accepting this, some adulation should be given to HBO, the true instigators of the sea change of cable television series, for sticking it out, for giving us Treme: The Complete Fourth Season--a much more hopeful moniker than the The Complete Final Season, which itself would make a great title for a particularly nasty pulp fiction novel-- even at half the length of what we would have hoped. (Oh, the kick in the gut to discover that DVD 2 only has two episodes, unlike the three of DVD 1, I had assumed I had another hour!) Also a tribute and bow to Simon and Overmyer who orchestrated an ending that is both hopeful and honest, imbuing the necessary loss into the inevitable circle of life, pulling off a similar trick as they did in those final moments of The Wire, though in this case transforming their "they will carry on" message from being a repeat of a doomed history to something more positive. The people of Baltimore and New Orleans are equally resilient, but the folks down in Louisiana are blessed with a different drug: the music that has made Treme a party from week to week, even when terrible things have happened to good people. 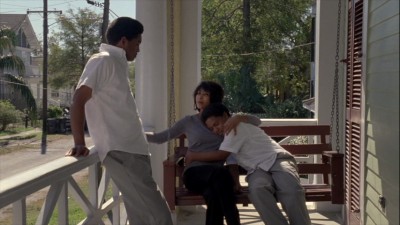 Fitting then, too, that the final image is of the most implausibly likable character of the whole four years, DJ Davis, a typically flamboyant rapscallion for actor Steve Zahn to play, but one with heart and soul, who comes by his annoying habits via an honest enthusiasm. That he has come from a character who, in the pilot, was seen busting into an out-of-business Tower Records to take back his unsold CDs and pumping Mystikal at deafening volumes to annoy his neighbors, to the grounded, accepting, and driven Mr. McAlary of the finale, breaking bread (or birthday cake, as it were) with those same neighbors, is indicative of the true reward of sticking with Treme all these hours. Each and every character has changed and grown in completely logical ways that make them, for better or worse, a new person, while also being the same person, recognizable as friends we made back in 2010. Treme is perhaps the most organic drama to ever be put on television, concerned less with the machinations of plot and more with the way people evolve in the circumstances they are given. So, the characters played by Wendell Pierce, Melissa Leo, Clarke Peters, Khandi Alexander, and all the rest have been allowed to do what they do, to engage with each other and the world around them, to enact change and try to be better. 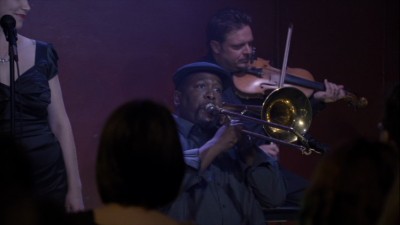 Sure, there are some plots--all subplots to the greater existence of Post-Katrina New Orleans--and plenty of those get wrapped in this last go-around. Leo's crusading lawyer Toni Bernette sees some justice done in relation to the wrongful deaths she's been trying to vindicate, and Pierce's trombone player Antoine Batiste has found purpose as a teacher that translates to added stability for his family. Annie (Lucia Micarelli) is finally finding her place in the music business, and Janette (Kim Dickens) has the restaurant she's dreamed of, and both are mustering the strength to maintain. And arguably most poignant is the peace that Alexander's LaDonna has found with Big Chief Albert (Peters), the man who has lead Treme from the start. His stubborn return to his waterlogged home in The Complete First Season set the tenor of the show, and how his storyline resolves is...well, devastating. He is our father, this is family, how can we not be moved by the way the lion makes his exit?

Thinking back to that ending, to the final montage of characters establishing a better tomorrow, soundtracked with a slow-like-honey rendition of "Do You Know What It Means to Miss New Orleans," to how these folks who are used to getting cheated and lied to and never getting an even break push forth against the ghostly waters of the flood that nearly ruined them, there is something perfect about the fact that Treme: The Complete Fourth Season opens on the day that Barack Obama was elected and ends just after the first Mardi Gras of his Presidency. We won't get to see the coming heartbreak as more promises fail to be delivered, as this leader who campaigned on hope, for all he has done, disappoints by constantly making us wish he'd do more. The ending montage could have just as easily been cut to the Who's "Won't Get Fooled Again." We are spared the struggles to come by Treme concluding when the belief in a better tomorrow was still intact. 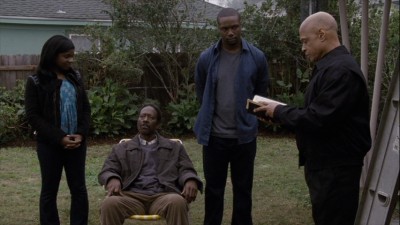 Video:
HBO spreads five episodes over two DVDs, presenting the shows in their 16:9 broadcast ratio. Resolution is excellent, with no evidence of pixilation or jagged edges. Colors are warm, and dark shadows are deep and blacks are solid.

Sound:
The main English soundtrack is mixed in 5.1. It's excellent, with nice interplay between the speakers and clear tones lacking in distortion. The all-important music is appropriately boombastic.

A French dub is also provided in 5.1, and there is a Spanish 2.0 track. Subtitles are also available in all three languages. This includes English Closed Captioning, as well.

Extras:
There are two audio commentaries. Episode one features a track with creator David Simon and writer/producer George Pelecanos. Simon is also joined by executive producer Nina Kostroff Noble and actor Clarke Peters to talk about the final episode.

FINAL THOUGHTS:
Highly Recommended. Treme: The Complete Fourth Season is a fitting end to an amazing television series. Treme is unlike anything you watched, a drama about a community populated by real people, brought to life by an exceptional ensemble cast. If you don't know, find out. Back up and read Jason Bailey's excellent breakdown of The Complete First Season, or my own review of The Complete Second Season, to pick up all the science you need to know about the show, and then go out and buy up all the DVDs you can. 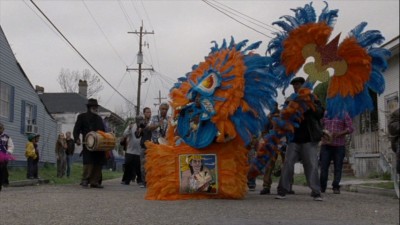