Who Is Harry Kellerman and Why Is He Saying Those Terrible Things About Me?

Paramount // R // January 28, 2014
List Price: $19.99 [Buy now and save at Amazon]
Review by Stuart Galbraith IV | posted February 12, 2014 | E-mail the Author
Sandwiched in Dustin Hoffman's filmography between Little Big Man (1970) and Straw Dogs (1971), and in the same general neighborhood as such other exceptional films as The Graduate (1967), Midnight Cowboy (1969), Papillion (1973), Lenny (1974), and All the President's Men (1974) lies Who Is Harry Kellerman and Why Is He Saying Those Terrible Things About Me? (1971), a film all but forgotten save for co-star Barbara Harris's Oscar-nominated performance and that marquee-unfriendly title. Wikipedia claims it's the longest movie title to be nominated for an Academy Award but that's incorrect. The winner, probably, is Those Magnificent Men in Their Flying Machines; Or, How I Flew from London to Paris in 25 Hours 11 Minutes (1965), which was nominated in the writing category.

The movie was the second feature of Ulu Grosbard, a former assistant director whose first feature, The Subject Was Roses (1968), was a fine film of the Broadway play he directed. Unlike that movie, Who Is Harry Kellerman is extremely pretentious and meandering, a grueling viewing experience despite fine performances by Hoffman, Harris, ex-Bowery Boy Gabriel Dell, and Dom DeLuise.

Paramount's no-frills DVD offers a decent enhanced widescreen but nothing else. 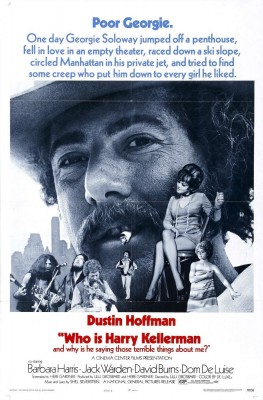 The mostly non-linear film presents a subjective internalization of folk-rock star Georgie Soloway's (Hoffman) neuroses. Though rich and successful (he's featured on the covers of Time, Life, etc.), the various women he's been dating all dump him after receiving calls from a mysterious man named Harry Kellerman, warning them off the narcissistic, divorced musician. He suffers from severe insomnia, is depressed and suicidal (often fantasizing about leaping from his Manhattan penthouse apartment), and believes he may be losing his mind.

His stereotypical psychiatrist, Dr. Solomon F. Moses (Jack Warden), who speaks with a thick pseudo-Austrian accent, is of no help at all. And Georgie finds little comfort in the company of his slick, womanizing manager (Gabriel Dell) and put-upon accountant (Dom DeLuise).

Seventy-three minutes into the 108-minute film he finds a kindred spirit of sorts in Allison Densmore (Barbara Harris), a fragile aspiring actress, but too late to do the increasingly lost Georgie any good.

Who Is Harry Kellerman and Why Is He Saying Those Terrible Things About Me? is tough sledding. Grosbard's indulgent direction constantly only draws attention to itself. It's full of gimmicky editing, most notably in transitioning from one scene to the next. Dede Allen, who worked with Grosbard when he was an assistant on Robert Rosen's The Hustler did something similar around that same time for George Roy Hill's adaptation of Slaughterhouse-Five (1972), but in that film the non-linear editing was ironic and funny or sad, and served Kurt Vonnegut's story well. Here, it's just showing off, perhaps with the intent of expressing Georgie's unfocused instability but little else.

Hoffman's performance is technically fine, but Georgie's emotional desperation never feels authentic, and as a super-rich, pampered pop star he's awfully hard to identify with on any level. When Barbara Harris's character turns up, she's so much the opposite, with every stated and unspoken emotion so believable, it only serves to make Georgie look that much more like a cartoon character. One reviewer on the IMDb wishes the movie had been about her character instead. I agree.

Hoffman is also never remotely acceptable as a Messianic pop culture figure. With his bushy, curly graying hair visually he suggests Bob Dylan (though Dylan never sported a mustache like Georgie), but in only one brief scene does he perform in front of a live audience, and he sounds pretty terrible. Why does everyone adore him?

What makes Who Is Harry Kellerman all the more frustrating is that lost in all the muck are many good ideas and fine performances hinting at what might have been a great movie instead of the spectacular misfire that resulted. Gradually the viewer doesn't accept anything it sees at face value. Soon, for instance, it becomes clear that Warden's psychiatrist is no more real than Georgie's suicide fantasies. In an early scene Dr. Moses starts speaking but Ray Charles's song "Don't Tell Me Your Troubles" instead comes out of his mouth, anticipating the later brilliant work of British television writer Dennis Potter and especially his The Singing Detective, which in some ways this resembles. Unlike Potter's brilliant television plays, here it serves no clear purpose.

Other ideas are simply bad. The art direction is weird and ugly, with Georgie's touch-tone speakerphones and answering machine, new technologies in 1971, getting unwarranted emphasis.

Like an oasis in the middle of the desert, Barbara Harris's performance makes the movie worth watching once. The ‘60s Broadway star should have enjoyed as long and prestigious a career as Hoffman's, but despite good reviews in almost every film she appeared in, Harris never seemed to find the wider audience she deserved. Her spotty film career began with A Thousand Clowns which, like Who Is Harry Kellerman, was written by Herb Garner, who almost certainly wrote the part with Harris in mind. She went on to appear in one memorable segment of Plaza Suite (1972) opposite Walter Matthau; was nominated for a Golden Globe for her performance as the ambitious housewife longing for a music career in Robert Altman's Nashville; and was funny as Bruce Dern's plucky, sex-starved girlfriend in Alfred Hitchcock's Family Plot (1976). She was nominated for another Golden Globe body-switching with Jodi Foster in Disney's Freaky Friday (also 1976), but after that her movie career slowly petered out, despite alternately touching and amusing supporting roles in Peggy Sue Got Married (1986) and Dirty Rotten Scoundrels (1988).

In movies she tended to play flighty/fragile, and/or sexually hungry/needy characters, this sexuality bubbling just below the surface, a quality captured well in both Plaza Suite and Family Plot. In Harry Kellerman, it's the flighty/fragile side. In by far the film's best scene she flops at an audition and, unable to move, Georgie comforts and calms her down. Her performance as a nervous woman whose minds and emotions are racing, reacting to an opportunity she's badly blown is so authentic I'd be surprised if this scene wasn't studied and even required viewing among real aspiring actors. It's a tour de force in an otherwise instantly forgettable, misguided and vapid film.

Who Is Harry Kellerman and Why Is He Saying Those Terrible Things About Me?, originally a Cinema Center Films production released through National General, comes to DVD via Paramount in a decent, 16:9 enhanced widescreen transfer approximating its original 1.85: theatrical aspect ratio. The title elements are a bit dirty, but otherwise the image is clean and clear with accurate color. Optional English subtitles augment with okay mono audio. Region 1 encoded. No Extra Features.

A bad movie with a handful of not-quite-redeeming elements, Who Is Harry Kellerman and Why Is He Saying Those Terrible Things About Me? is worth a Rental for Barbara Harris's performance and a couple of other things, but only just.