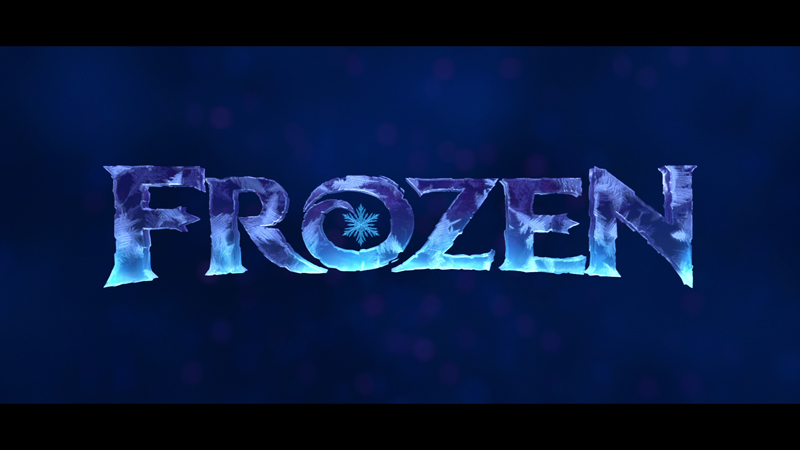 
The Movie
I may have a slight bias against Walt Disney Animation Studios. I'm trying to shake it, but it is not entirely my fault. When Pixar came on the scene with their incredibly well-made features, Disney Animation was still pumping out their trademark slate of Broadway-style musicals and fairy-tale adaptations, which wasn't exactly inspiring to watch. As a result, I've downplayed the output of the D.A.S. for some time. But since Pixar head John Lasseter took over, they've pretty consistently surprised me with their quality, from The Princess and the Frog, up to the astounding Wreck-It Ralph.

Even so, when I saw the first trailer for Frozen, which featured a wordless battle for a carrot on an icy pond between a moose and a snowman, I immediately shot the film down as more of Disney's usual kid-pandering. That it would feature several Broadway-style musical numbers and was an adaptation of a Hans Christian Andersen book, The Snow Queen, only served to further pre-sour me on the film. But, as the father of an excited young girl I want to develop into a cineaste, it was my duty to take her to the theater (though I admit I tried to pawn this trip off on my wife.) But once it started, and I heard Idina Menzel sing the words of Avenue Q genius Bobby Lopez, any resistance I had (pardon the pun) melted away quickly.

Frozen tells the tale of Elsa (Mendel), a young royal with the power to freeze things with her touch. When she accidentally uses this ability on her younger sister Anna (Kristen Bell), her parents lock her away to protect the kingdom from her touch, an imprisonment Anna, who was always close with Elsa, cannot understand. After some time, Elsa eventually emerges, but things don't go well, sending Elsa off into exile, the kingdom into unending winter and Anna in search of her lost sister, aided by an explorer named Kristoff (Jonathan Groff.) What's great, especially for the female part of the audience, is how the film doesn't rely on old fairy-tale tropes, despite a set-up made for them. Anna doesn't need to be rescued, she's not defined by her relationship with the dashing leading male and the solution to her problems isn't found in a kiss. 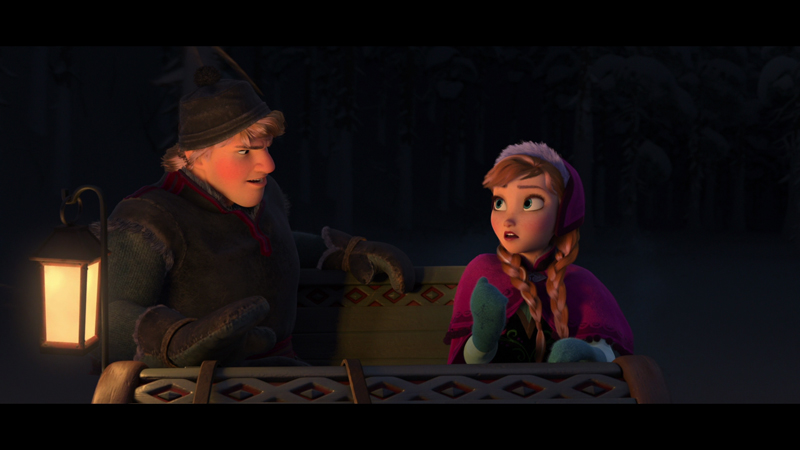 The film, directed by the team of Chris Buck (Tarzan) and Jennifer Lee (Wreck-It Ralph), strikes the right balance between the action of the search for Elsa and the emotion of the strained relationship between the sisters and with their kingdom, while tucking in some political intrigue as well (though it's too telegraphed to match up with the other elements.) Never does the film feel like it's dragging or padding out the run-time, with a mix of scenes that keeps the pace high. While the somewhat comparable Tangled offered a good time in following its own princess, Frozen is far more of a complete and engaging film.

The biggest reason to watch Frozen though is to luxuriate in the Broadway-ready songs Lopez has written for stage veterans Menzel, Groff and Josh Gad (of Lopez' The Book of Mormon,) as well as Bell, who proves to be a fine singer in her own right. Naturally, it's Menzel who sets the tone with the Oscar-winning "Let it Go," which offers a high-point to match her career-defining "Defying Gravity" from Wicked. The film's soundtrack is more than its key anthem though, with several memorable numbers, from the heart-rending loneliness Bell exudes in "Do You Want to Build a Snowman" to the young love expressed in "Love is an Open Door" to the soaring duet Menzel and Bell share on "For the First Time in Forever." It's a bit ironic that Frozen works so well, since the dependence on show tunes is what made Disney films once seem stale, but apparently absence has made the heart grow fonder of musicals. Or perhaps it's just Lopez' talent.

Aside from the introduction of a race of Smurf-like mystical creatures, which are almost wholly incidental to the film aside from offering some deus ex machina opportunities, where the film could have taken a wrong turn is in the character of Olaf (Gad), a living snowman, who's paired up with Kristoff's reindeer pal Sven to create comedic relief (an element that's already in good supply through Bell and Groff's performances.) Gad is very good at lending the character that sense of ceaseless positivity that Jack McBrayer specializes in, but with more emotional heft, with the spotlight song "In Summer" clearly showing everything he brings to the film clearly. In Gad's hands, Olaf transcends the role of cutesy sight gag, and becomes a part that entertains kids on a surface level, but appeals to adults as well (along with delivering the film's biggest laughs.) It's emblematic of a studio that has embraced the Pixar ideal of delivering something for everyone watching, which has resulted in the original home of Disney animation matching and often surpassing the upstart of late. 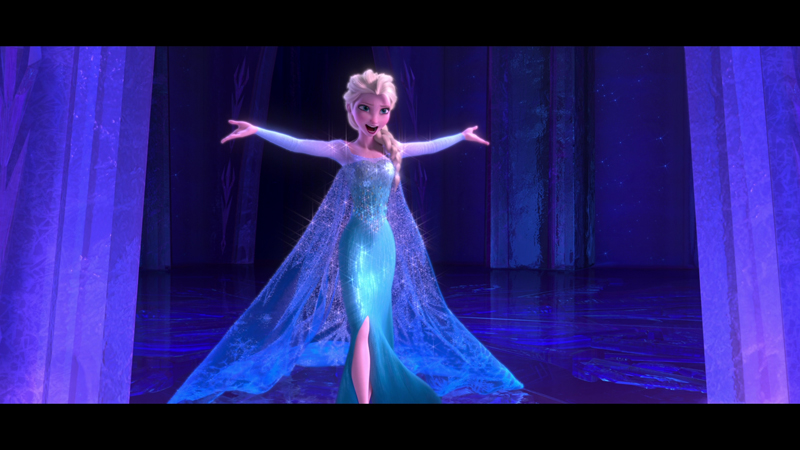 The Discs
This film arrives in a two-disc set in a standard-width, dual-hubbed BR keepcase inside an embossed, holofoil slipcover. The Blu-ray features an animated menu, offering the option to watch the film, select chapters, adjust languages and check out the extras. Audio options include English DTS-HD Master Audio 7.1 and Audio Description Dolby Digital 2.0, along with French and Spanish 5.1 tracks, while English SDH, English, French and Spanish subtitles are available.

The Quality
The 1080p, AVC-encoded transfer on this film is another example of Disney at its best, as the image is a vision of all-around beauty, marked by appropriately lush color and a stunning level of fine detail that lets viewers truly appreciate the heights Walt Disney Animation Studios have reached with their CG animation. The smallest elements looks like they could be the focus of the scene they are so clearly defined, while deep black levels keep an occasionally dark film from becoming murky. The ice seen throughout in particular is absolutely gorgeous here, on a level I certainly did not notice in the theatrical presentation. Digital distractions are not a concern in any way, though the lack of bonus content certainly helps in that matter (see The Extras.)

The outstanding video on this disc is paired with an equally excellent DTS-HD Master Audio 7.1 track. The film, with all its bold music and epic mountain vistas is made for a strong audio presentation, and this delivery doesn't disappoint. You are placed in the middle of a maelstrom of aural activity that features crisp differentiation between the channels, precise placement in the surrounds, impressive dynamic mixing that moves the action around the room and strong presence in the low-end, which combined make the action scenes a fantastic experience. Voices, especially in the songs, are clear throughout and there are no issues with distortion, making for an extremely enjoyable and immersive listen.

The Extras
Looking at the list of extras, it all seems a bit slim. Looking back at Wreck-It Ralph shows that movie didn't exactly get the Criterion treatment, but it certainly fared better than Frozen. Things start out with the animated short that accompanied Frozen in theaters, the new Mickey Mouse cartoon Get a Horse! A film that plays around with the idea of the fourth-wall of film (and may work a touch better in 3-D), the short pits Mickey against his old foe Peg-Leg Pete, and is the first Disney aimated film directly solely by a woman. A film that succeeds both technically and artistically, it has fun with the idea of the characters existing in an old-fashioned film print that's being played, and then breaking through into "reality" and moving between the two planes as required in the effort to stop Peg-Leg Pete. As part of a recent wave of modern Mickey Mouse cartoons, it shows there's still life in that character without changing him dramatically or "Poochie-ing" him.

Up next is "The Making of Frozen." This is certainly what fans would love to see, but when you notice it's only three minutes long, one wonders what they could cover. The answer is, basically nothing. Instead, we get to follow a trio of Disney Animation employees named Jonathan, Josh and Kristen on their way through the offices, as they happily sing and dance about going behind the scenes. Problem is, they don't ever do that, and there's nothing here that really does, so joke's on us. Even so, it's a fun bit of amusement.

The brief seven-minute "D'Frosted: Disney's Journey from Hans Christian Andersen to Frozen" does a better job of revealing more about the film, focusing on the history of the long-gestating film, which started development under Walt Disney, before eventually being made 85 years later. Directors Buck and Lee take the lead, talking to long-time costumer Alice Estes Davis, whose husband did original illustrations for a Disney attraction based on the Andersen book. The stories told here are very interesting, but the key is the beautiful archival art that's put on display. More material like this would have gone a long way with fans of the film.

Seven minutes of deleted scenes are next, presented via animated storyboards with voices, representing four moments cut from the film, including a look at a villainous Elsa (who really wouldn't have worked.) Buck and Lee return to provide introductions for each scene, explaining why they were cut, which should be mandatory for such features.

"Let it Go" has become a musical phenomenon, with everyone of YouTube offering their own interpretation. This disc includes four official variations (running a combined 16 minutes.) First up is a video for Demi Lovato's radio version, which looks like a Celine Dion video and doesn't quite match the greatness of Menzel's. Then Martina Stoesel offers a pair of nearly identical videos with the song sung in Spanish and Italian, while Marsha Milan represents for Asia with her Malaysian edition, which feature the most unique of the four video presentations. Honestly though, I'd rather have seen Menzel perform it in person.

Also in the set is the film's two-minute teaser trailer, and a code for a digital copy of the movie. 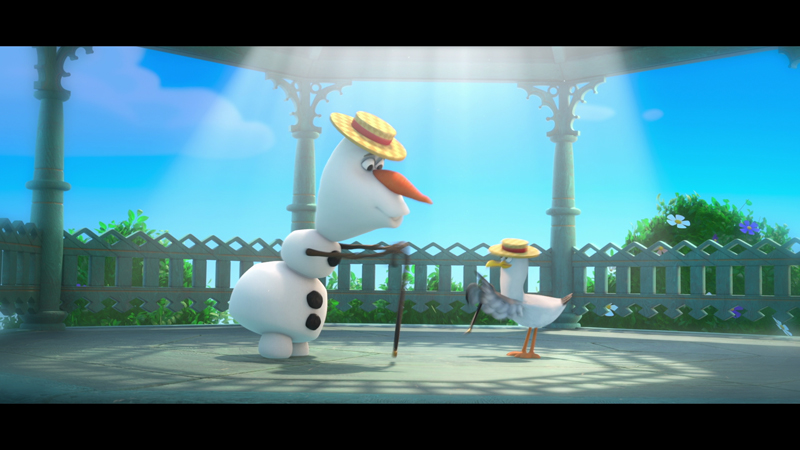 The Bottom Line
I'm not a member of the He-Man Woman Haters Club, but on first glance, the female-empowerment fairy tale Frozen did not excite me. However once you watch it, it's hard to not become entranced by the spectacle of music, action, emotion and comedy, which is delivered in an absolutely gorgeous animated package that deservedly earned a pair of Oscars. The Blu-ray quality is also exceedingly high, though the extras leave you wanting much more (and hoping for/expecting a double-dip at some point.) That said, this is a wonderful experience from all angles for any family, especially one that enjoys a little Broadway bombast.