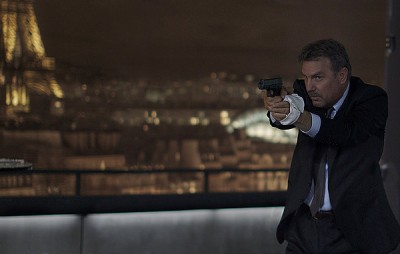 Please do something about Luc Besson. I know you probably can't stop him completely, but what if you treat him like a giant walking cigarette? You could tattoo a big skull and crossbones on his face so that everyone who sees him approaching would know he's poison.

Granted, this won't stop a lot of people. I'm pretty sure warnings on cigarette labels have been successful exactly 0% of the time, but I would wager a dude with a warning tattoo on his face would give at least the bean counters pause. No one wants to give money to that guy.

Which would then stop movies like 3 Days to Kill. If no one were willing to bankroll this dreck, Besson would have to find other ways to get his cookie-cutter scripts made. This time around, he's roped in McG, the once-promising director of the Charlie's Angels movies. Then again, Besson was once known as the director of The Professional and The Fifth Element; now he's the writer/producer of such merde as Colombiana, From Paris With Love, and Lockout. Still, I hesitate blaming Junk-Luc for ruining McG. When he was a music video director, McG worked with Korn, Sugar Ray, and Sublime. You couldn't tattoo the word "dipshit" on a forehead the size of Mount Rushmore and keep that guy away.

And, say it with me--no one wants to give money to that guy.

So, why do they then? A fair amount of Mt. Rushmore-sized dummies threw a ton of cash at McG and Luc Besson to make 3 Days to Kill, a rancid action-comedy that stars Kevin Costner as an old-school CIA wetwork expert who is being forced into retirement by a terminal disease. With only three months to live (and three days to kill!), Coster decides to make peace with his estranged wife (Connie Nielsen) and his teenaged daughter (Hailee Stanfield, who can rest assured that Romeo and Juliet is no longer the worst movie she made since getting nominated for an Oscar for True Grit). Costner has a lot of absent time to make up for, so when the agency offers him an extended lease on life, trading an experimental cure for him taking the last job of killing an international crook only he can identify, of course he takes it.

Where the movie goes from there is pretty easy to predict. Costner has a weekend alone with his kid to make her like him again, but he also has that weekend and that weekend only to kill the bad guy and get the right dosage of experimental medicine to save his life. Can he be a sitcom dad and a contract killer without the two crossing over? This season, watch Kevin Costner on Le maison dans improvement.

3 Days to Kill is a sloppy, turgid mess of a motion picture. The action sequences are muddy and lacking in excitement. The drama is hackneyed and clichéd. The humor is the only thing with any kind of variety. Meaning, it has two different options. If you're the kind of person who would laugh at a bizarre homage to Kevin Costner's role in The Bodyguard, then okay, maybe you won't hate 3 Days to Kill as much as me. Likewise, if you get a chuckle out of seeing Kevin Costner repeatedly torture a man, including electrocuting him and pushing his car over a bridge, or have no problem with your so-called hero shooting an innocent bouncer in the foot because said bouncer won't let him into a nightclub--well, actually, there is no likewise. You're pretty much not a nice person and I question your ethics. I wouldn't even think someone like you actually existed if the publicity company in my area hadn't rounded up a bunch of you to watch the movie with me. What the hell? Was the Wednesday night cockfight canceled?!

3 Days to Kill is a poorly made, cynical shakedown of the moviegoing public. It trades on Kevin Costner's good guy image and certain traditional American values like family and second chances and might-makes-right, relying on their nastiest elements in hopes of appealing to the blood-thirstiest regions of the hivemind so that as many people as possible are tricked into paying good money to see it.

It's a movie made for that guy who lives next door who keeps to himself and hordes all the bandwidth and maybe is responsible for the neighborhood pets disappearing.

And no one should make a movie for that guy. Not unless it's only showing on a one-way cruise to France. Arrivederci, jerks! 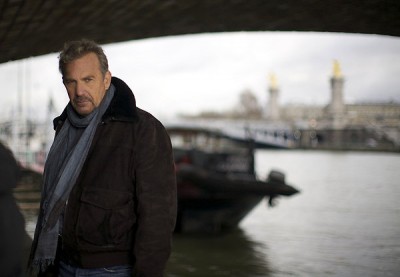