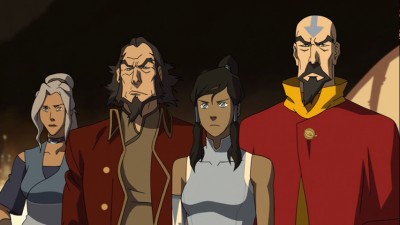 As a major fan of Avatar: The Last Airbender, which came and went, rending a perfect story in its pre-planned trilogy of seasons, there was certainly good reason to be sceptical of The Legend of Korra, the spin-off show that came along several years later. Avatar: The Last Airbender was a superfun blend of soap opera and adventure, establishing a mythical world where people could control different elements (water, earth, fire, or air), and the system that allowed for one special person, the Avatar, to maintain peace by controlling all four. The series, which ran from 2005 to 2008, was joyful and smart and altogether exciting to watch.

Needless to say, I was surprised and delighted when The Legend of Korra ended up delivering on the promise of its predecessor. Slightly more serious, but no less imaginative, The Legend of Korra is set 70 years after the end of Avatar, and it focuses on a seventeen-year-old girl (voiced by Janet Varney) who is destined to become the new Avatar. She was born a water bender and is taken under the tutelage of Tenzin (J.K. Simmons, Juno), the youngest child of Aang and Katara, the main characters of the The Last Airbender. The original season, Book One: Air, focused on Korra learning her skills and also establishing her identity, with an overarching narrative about the Equalist movement, featuring non-benders targeting benders out of prejudice and fear. 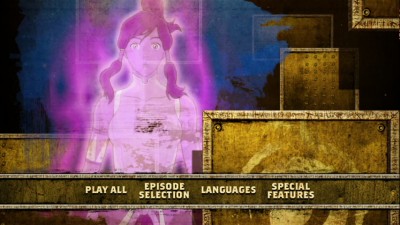 Book Two: Spirits takes a similar tack in that it combines two major story lines to make for one extended tale. In this case, there is the political turmoil caused by a civil war between the North and South Water Tribes, as well as a greater lesson for Korra in terms of her being able to learn to combat Dark Spirits and generally interact with the mystical spirit world. It all gets very complicated when Korra's uncle from the North turns out to be the one causing the ruckus, and he creates a schism not just between Water Tribes but in Korra's family, as well. One that will extend far beyond the physical realm and threaten to destroy it all.

Meanwhile, there is also trouble amongst the supporting cast. Firebender Mako (David Faustino, Married With Children) is now a police officer in Republic City in addition to being Korra's boyfriend. His duties as a cop conflict with Korra's mission to stop the Northern aggression (I can't believe I just typed that), and so that puts a strain on their romance. Meanwhile, Mako's brother Bolin (P.J. Byrne) is caught up in the anti-North propaganda machine run by war profiteer Varrick (John Michael Higgins, Best in Show), who may not be all he seems. Mako starts poking his nose into Varrick's business, even as Varrick allies himself with Mako's friend and one-time lover Asami (Seychelle Gabriel).

Amidst all this, we also get a two-part interlude where Korra has a vision of how the very first Avatar got his powers. 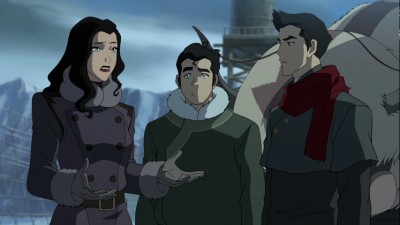 The Legend of Korra - Book Two: Spirits starts a bit slow as all the pieces are assembled on the board, but gets stronger the deeper we move into the series, kicking into high gear after the origin story in the middle. Particularly, where the two-disc set splits. The double-dose mythological tae, "Beginnings," spans the discs, explaining how the very first Avatar came to be, and by the time we come through that, Korra's mission is set. For the rest of the season, it's one straight line to the climactic battle, with the Avatar gathering her team to stop her uncle from bringing the ultimate evil into the world. It kicks off with a couple of ingenious episodes, first a bit where Korra and her cousin (Mad Men's Kiernan Shipka) venture into the spirit realm, and another where Bolin must become his own matinee image in real life. The final three episodes are pretty much big action set-pieces, but with real consequences.

The animation in The Legend of Korra - Book Two: Spirits is, unsurprisingly, very good, with a distinct focus on both character moments (the thing that gets short shrift in more traditional cartoons) and fight sequences (the things other cartoons simply fail at). I particularly enjoyed the design of the weird creatures from the magical realm. There are some nice effects here, including knocked-out color and the usual conceptual nods to Hayao Miyazaki. The series finale goes to bigger places than the show has gone before, which more than makes up for any missteps along the way. Curious now to see what's next and what has happened on the start of Book Three. 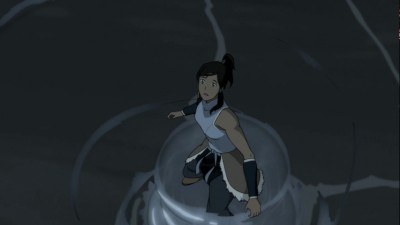 Video:
The Legend of Korra - Book Two: Spirits has fourteen 22-minute episodes spread over two discs. They are playable one at a time or as a play-all function. Though, be careful. The full running time for disc 2 did not show up on my player's countdown, leaving me to think the show was ending two episodes prior to the big finish (and in a wholly unsatisfying way).

The episodes are presented in widescreen and the image is of fine quality, mirroring and often besting original broadcast. Colors are vibrant and resolution is fantastic. Any complaints actually go back to the original animation and the newer digital techniques, which is often obvious in faster movements when the line art starts to break up.

Sound:
The main English soundtrack is mixed in 5.1. Dolby Digital. The mix has a lot of oomph and uses all the speakers to bring the action to life. The larger the scenario, the better the audio. 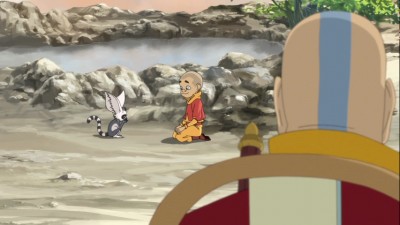 Extras:
The double-disc set comes in a standard-sized dual-tray case with an embossed outer slipcover. Bonus features are spread across both discs. Note that these extras are considerably less than the Blu-ray version, so caveat emptor. Personally, I find the four audio commentaries we get here more than enough, but I am sick to death of audio commentaries in general. But to each his own (there are 14 on the BD; I'd rather gouge out my eardrums with a knitting needle). DVD customers also get two of the 15 "scene bendings" that are on the BD, short examples of the animation process for specific scenes.

Finally, there is the 5-minute featurette "Feuding Spirits: Korra's Family," which is pretty much exactly what it sounds like.

FINAL THOUGHTS:
Recommended. The Legend of Korra - Book Two: Spirits is not as good as the first season, but it's still a pretty impressive action-adventure fantasy animated series. Korra's challenges this go-around extend beyond the physical plane to the spiritual realm, and the animators meet this challenge with some pretty incredible designs. The action outshines the drama, which can kind of drag, but stick it out, the payoff is big. 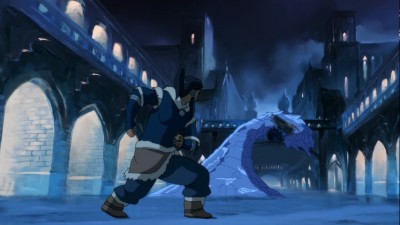