A beautifully ugly work of art 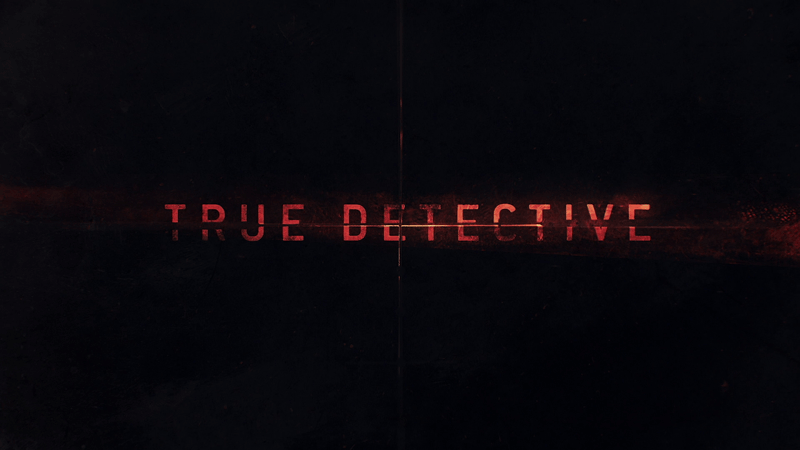 Your humble reviewer does not have a subscription to HBO. As a result, some of the most-discussed series on TV do not cross my path very often, at least until some sort of home-video release. I've found, more often than not though, paying subscription fees just wouldn't pay for me, since their big series, like Game of Thrones,

Written by novelist Nic Pizzolatto (who also wrote two episodes of The Killing, something we'll try not to hold against him) and directed by Sin Nombre's Cary Joji Fukunaga, the eight-episode series unfolds the story of Marty Hart (Woody Harrelson) and Rust Cohle (Matthew McConaughey), two members of Louisiana's Criminal Investigation Division. They are called in when the body of a young woman is found in a seemingly ritualistic pose, putting them on a course that will come to define their lives as they try to solve the puzzle surrounding the murder, which involved religion, small-town royalty and the depths of man's evil.

There have been plenty of serial-killer stories that have centered around similar cases and situations, but the way this one is told is what gives it its unique feel and power. Though the killing takes place in 1995, the story is being told in 2012, as each man, 17 years more weary thanks to yet unseen circumstances, is interviewed by investigators. The reasons for this are not clear (though if you pay attention it's easy enough to pick up) and the fact that both men are obviously alive robs the series of a bit of it's otherwise thick tension, but it's a terrific device for allowing perspective shifts and playing with the idea of the unreliable narrator, especially when what we're told doesn't jive with what we see. These interviews also allow Harrelson and McConaughey to put their fine acting chops on full display. Throughout the series, both men repeatedly show exactly why they are two of the finest actors of their generation. 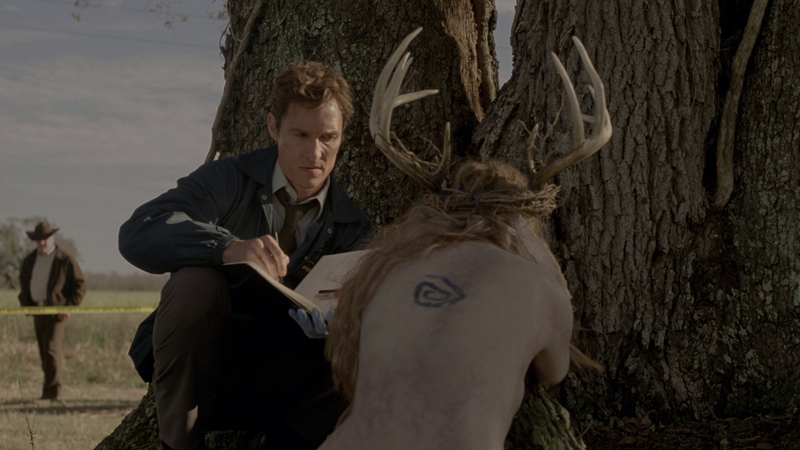 As the case progresses (and sometimes when it doesn't) we get to know more about both men. and it becomes clear that we're dealing with humans bearing some serious flaws. Hart's family life is a mess, while Rust's obsessions mask a painful personal history, and together, they are not exactly the picture of a perfect partnership. Though their individual and shared histories are a key element of the series, exploring them, a dominant theme that emerges about halfway into the series, puts a bit of a drag on what had been, until that point, a nail-biting investigative drama. The show still manages to work in some incredible high points here as well though, like a tracking shot that follows an undercover Rust battling his way through the projects in order to find an informant, a non-stop scene that sparks with excitement. Though the energy is different when the focus is more on Hart and Rust rather than on finding the killer, that's not to say that the show isn't still great.

What isn't as great, at least from a satisfaction standpoint, is how it all wraps up. Functionally, there's nothing wrong with the case's resolution, but it just doesn't live up to the expectations built up over the previous eight hours spent chasing an unseen baddie. It could certainly be argued that nothing could live up to what viewers built up in their heads over the time spent with the series, but this certainly felt a little deflating. The finale is incredibly creepy though, starting at an insane high point of disturbingness and building in tension from there (which is the show's greatest strength, aside from the performances of the two leads.) In the end, the conclusion of the series fits right in line with the philosophy espoused throughout the rest of the show by Rust, so, paradoxically, it's satisfyingly unsatisfying.

While the storyline might inspire some quibbling, as a work of art the series is above reproach, starting with the brilliant opening titles, which set the mood of the show like few others. The cast, including Harrelson, McConaughey and a host of other less-recognizable yet outstanding performers like Michelle Monaghan as Hart's wife, knocks every scene out of the park, while the look of the show, led by Fukunaga and DP Adam Arkapaw (Jane Campion's Top of the Lake), is simultaneously gorgeous and decrepit. The production design is simply incredible, and, combined with T. Bone Burnett's traditionally wonderful work on the music, both in score and soundtrack, results in a level of small-town southern creepy that makes the show the moody experience it delivers. 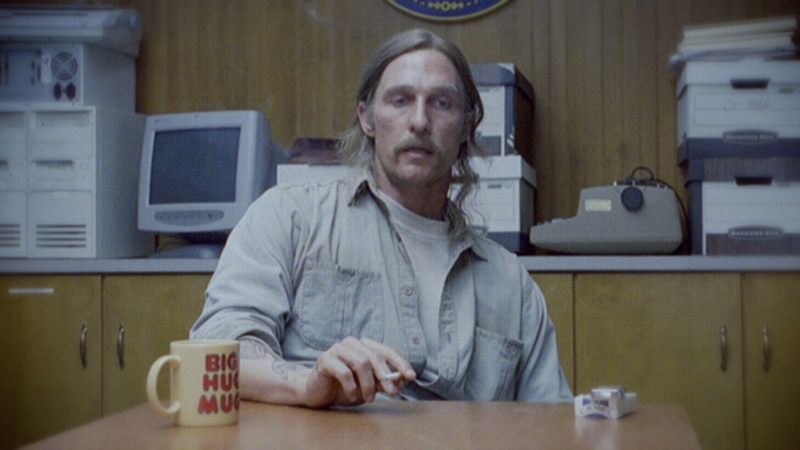 The eight episodes of the first (and certainly not last) season of True Detective arrive spread over three Blu-ray discs, which are held in a four-panel, three-tray digipack, inside a heavy, embossed slipcase. The entire package is designed to mimic the show's gray promotional art and the effect is gorgeous. The menus surprisingly do not simply replicate the show's iconic opening titles, but go in a different direction, with footage from the series, and feature options to watch all the episodes, select shows, adjust set-up and check out the extras. Audio options include English DTS-HD Master Audio 5.1, French DTS Digital Surround 5.1 and Spanish DTS 2.0 tracks, while subtitles are available in English SDH, French, Spanish, Dutch, Danish, Finnish, Norwegian and Swedish.

With the variety of settings and locations, not to mention the myriad visual tones utilized by the creators, True Detective offers Blu-ray a legit challenge, and the 1080p, AVC-encoded transfers here pass the test. Colors are vivid where there are intended to be, while the more muted palettes also fare well, along with the fleshtones. The level of fine detail excellently shows off the series' intense production design, and offering a sharp image that's complemented by the fine layer of film grain. Black levels, as exemplified by the dark, motion-heavy scene in the projects in episode four, are solid and deep. There are no concerns about digital distractions, as to be expected with a comfortable maximum of just three episodes per Blu-ray disc.

The series' DTS-HD Master Audio 5.1 tracks bring home Burnett's great work with the music, along with some impressive sound design. Where appropriate. atmospheric effects and soundtrack fill out scenes on the sides and rear, while the dialogue is crisp and clean out of the center channel. When the show gets going with action, the surrounds help set the scene, with quality directionality and dynamic mixing, which results in a full soundstage. Again, the chaos in the projects and the series' big climax are moments to enjoy thanks to the audio presentation.

The big extra here is a pair of audio commentaries, on episodes four (with Pizzolatto and Burnett) and five (Pizzolatto, Burnett and Executive Producer Scott Stephens. Though the insight provided is appreciated, especially from Burnett, who has plenty to say when it comes to the show's music, there's a good deal of dead air, and a lot of the talk focuses on praising the cast and crew. The choice of episodes is also a bit of a missed opportunity, as, with only two commentaries, one would think the first and last episodes would have made for better conversation. Either way, at least we get to hear from some of the show's creative participants (though one wonders where Fukunaga might be.)

In addition to the recaps and previews that aired with each show, there are also mini video commentaries (of a sort) in the form of "Inside the Episode" featurettes for each episode. Running a total of 36:01, these overviews, with Pizzolatto and Fukunaga on-board, look at the episodes' main themes and core elements, offering some show-specific info.

Two deleted scenes are up next, from episode three (6:17) and episode eight (3:40). Though the last one is more of a travelogue of Louisiana, with plenty of aerial photography that shows how simultaneously beautiful and desolate the state can be, the first features the entirety of the revival preacher's sermon. This isn't in anyway integral to the plot and was better left out due to its length, but it does tie into some emerging themes in the series, and is wonderfully performed.

"Making True Detective" (15:02) is an overview for the show and goes deeper into the production, with plenty of on-set footage, looking at shoots in several locales, and the fact that the show was shot on film, not video. It's followed by a brief four-part, eight-minute chat with McConaughey and Harrelson, who sit side by side. Mostly it's about reminiscing about the shoot and talking about scenes that stand out, which makes it a bit fluffier than the rest of the extras, but the actors seem to be enjoying themselves.

Wrapping things up is a 14:25 conversation between Pizzolatto and BUrnett, in which they cover a variety of topics in a quick, engaging chat, including music (natch), the script, Louisiana, the portrayal of female characters in the show, their heroes, the ending and the series' final song. Undoubtedly, this set could have used way more of this pairing.

Also included with the set is access to a digital copy of the season. 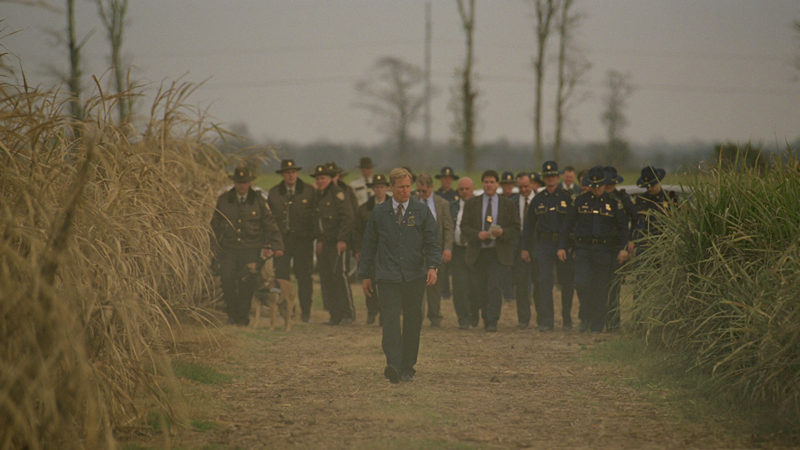 Though the ending fell short of the satisfaction hoped for after investing seven hours in the chase, it was fitting. Besides, the journey is half the fun, and the harrowing path taken by Rust and Hart made for one of the finest series on TV in recent history. This Blu-ray set does the show justice in terms of the presentation quality, and throws in a good blend of bonus content, though more would definitely have been welcome. If you enjoy a well-told story of redemption or even just a grim tale of depravity, True Detective is the equivalent of an instant classic trilogy.