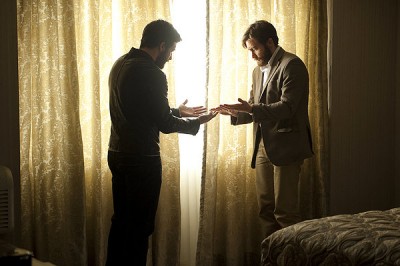 Jake Gyllenhaal does dual duty in Enemy, playing Adam, a frumpy, beleaguered history professor who has his life turned upside-down when, while watching a movie a colleague recommended to him, he spots himself in the background dressed as a bellhop. Only, it's not him, it's an actor named Anthony. The two men are identical in every way, including scars. They even both like attractive blondes. Adam, heretofore known as Teacher Jake, is dating Mary (Melanie Laurent, Inglourious Basterds), whereas Anthony, a.k.a. Actor Jake, is married to Helen (Sarah Gadon, A Dangerous Method) and they are expecting their first child. The only differences between them are where they are at in life and their attitudes. Anthony, heretofore known as Actor Jake, is a confident go-getter. He is the id to Teacher Jake's ego, the yin to his yang.

It's no surprise, then, that Teacher Jake becomes obsessed with trying to meet his more accomplished doppelganger. He's basically looking in a mirror and seeing everything he wishes he could be. Actor Jake is in shape, well-groomed. He rides a motorcycle, while Teacher Jake has a reliable car. Actor Jake also has some strange predilections, hinted at in a surreal opening, and that also cross over into his double's dreams throughout Enemy. It's these impulses that cause the eventual switch-up. Actor Jake is more inclined to put this strange discovery to use. He wants to walk a mile or two in his lookalike's sensible shoes. 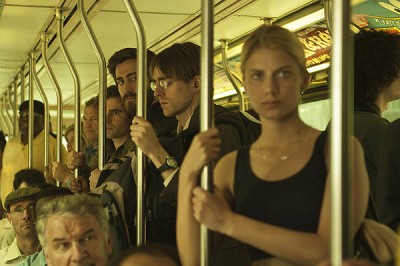 This twist sets up the second half of Enemy, which is an otherwise slow-to-start, scattered effort from Denis Villeneuve (Prisoners). The Canadian director's paranoid thriller is shot from a screenplay by Javier Gullón (Invader) and based on a novel by José Saramago (Blindness). Enemy is best when working the more psychological angles of the story. Why are the two men doing what they are doing? How do the women in their lives figure out who they are contending with? The actors adapt to the roles well. Laurent's participation is limited, but Gadon's performance is smart and soulful. She anchors many of the later scenes, providing a feeling of normalcy as the tale careens off into strange places.

Gyllenhaal is excellent as the dueling leads. He could have easily let hair and make-up do most of the work differentiating Adam and Anthony, but he brings other subtle differences to how he embodies the two men. The teacher's posture is slumped, and he walks with a trudging gait; the actor stands up straight and enters rooms with authority. It's a pretty impressive feat. The performer uses the differences to amplify the similarities.

Which makes it more of a shame that Villeneuve doesn't have more clarity and control. I suppose it's kind of fitting that a movie with Enemy's themes would be full of disparities that the viewer will be consistently flip-flopping over. I found myself to be of too minds about everything. For instance, was the music by Danny Bensi and Saunder Jurriaans (Martha Marcy May Marlene) just the right kind of creepy, or was it too on the nose? At times, it was effective, but at other times, obvious and intrusive. Likewise, Villeneuve's own stylistic flourishes alternately underline and undercut his efforts. The jagged editing adds to the audience's feeling of unease with a kind of controlled confusion, making us wonder how much we really know about what's going on. On the other hand, the overly literal dream sequences and the recurring visual clues in waking life are too heavy handed. By the last time you see a spider-web pattern, you won't know whether you want to laugh or shout out, "Okay, we get it!" Dream logic allows for a certain amount of red herrings (just whose mother is Isabella Rossellini playing?), but at the same time, they have to add up to a little more than what Villeneuve gives.

It's almost as if the filmmaker is divided himself, caught between making two completely different movies and not being sure which one he prefers. By Enemy's completely unnecessary final shot, it appears Villeneuve has decided, though I'd argue that he made the wrong choice. If he'd stopped what he was doing and went to black even sixty seconds earlier, Enemy would be a far better movie than it is. Even so, it's not a film I'd reject outright. It may take a second viewing to decide whether I really love it or actually hate it, but Enemy has enough intriguing elements to at least be worth trying to figure that out. 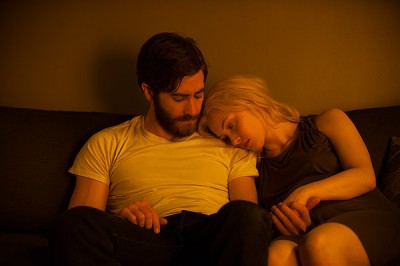