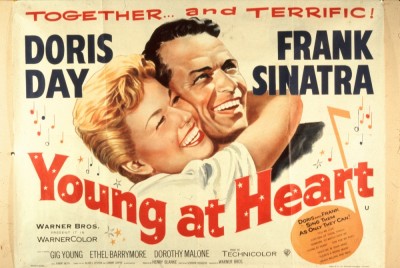 No sooner have three sisters in the Connecticut suburbs lamented the lack of eligible bachelors in their small town than a couple of virile artistes show up at their doorstep, turning heads and disrupting lives in the well-worn but likable romantic melodrama Young at Heart. Released in 1954 and directed by Gordon Douglas, Young at Heart is a vehicle intended for the unlikely pairing of America's sweetheart and its heartbreaking lothario, Doris Day and Frank Sinatra. It largely comes off because, as it turns out, they are a pretty good match. The screenplay by Julius J. Epstein and Lenore Coffee makes use of their personas, creating a love story where the hopeful ingénue tries to tame the cynical city boy.


Day plays Laurie, the youngest of the three Tuttle girls, who live with their widower father (Robert Keith) and his elder sister (Ethel Barrymore). Oldest daughter Fran (Dorothy Malone) is newly engaged to boorish businessman Bob (Alan Hale Jr., a.k.a. Gilligan's Skipper), and the younger girls are convinced they will never marry. Middle sister Amy (Elisabeth Fraser) is afraid she'll have to settle for the plumber, Ernie (Lonny Chapman), the way Fran has settled for Bob. Instead, Laurie and Amy swear to either marry together or stay spinsters.


Enter Alex Burke (Gig Young), a cocky composer who comes to work alongside Mr. Tuttle and lets a room in the Tuttle home. He pretty quickly takes over and captures the hearts of all three girls, who find the arrival of fresh meat irresistible. Alex ends up with eyes for Laurie, however, as does his friend Barney (Sinatra), who arrives a short time later to help Alex with the orchestration of his musical. Barney is a hard-luck case, a pianist who sings in saloons. He broods and cracks wise, but Laurie sees through his dark exterior. She welcomes him into the family and tries to wear him down. The trick works, but not before Alex has popped the question.


What follows is a lot of longing looks, tearful equivocations, earnest admissions, and missed connections. When confronted with what she believes to be the truth about Amy's feelings for Alex, Laurie makes a noble sacrifice, though Young at Heart surprises by shaking up those truths and offering some alternatives. The drama grows a bit heavy as it goes, and the ending plays on a cliché that would be repeated in many more sudsy soap operas and often lampooned in countless parodies of the same. What makes it all work is Day's earnest sincerity and her sunny personality. Though her songs tend to come off as fake and syrupy, her acting here is superb. Laurie is believably bright and kind, and she makes a good match for Sinatra's Barney, a sad-eyed philosopher with a cigarette forever poised on the edge of his lips. The Chairman's tunes fare better, the movie warms every time he sits at the piano to tinker around.


Had Douglas maybe tightened up the final act, Young at Heart would have ended up a much stronger picture, but I do like the change-ups made as all the pieces come together. What could have been a hokey or more predictable romantic picture ends up giving a far more balanced view of love and marriage than many of the other heart-tuggers and tearjerkers of the era. 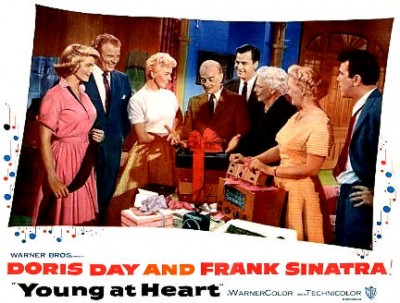 
Olive Films presents Young at Heart at its 1.66:1 aspect ratio. The color transfer is a bit soft for high-definition, with excessive grain and muted colors that sometimes grow blotchy. There is also print damage here and there, with marks and scratches showing on the screen. The image is never obscured or out of focus, but it's lacking in overall crispness and vibrancy.


The new mono mix of the soundtrack fares better. Dialogue is well tuned and easy to discern, and the musical numbers are appropriately clear and warm.


Recommended. Though overlong and occasionally saccharine, Gordon Douglas' 1954 romance Young at Heart is otherwise an enjoyable melodrama that effectively uses the seemingly unlikely pairing of good girl Doris Day and bad boy Frank Sinatra. The twists and turns and broken hearts and misunderstandings that occur when three sisters all fall for the same man makes for a fine love story, with a few dark moments and surprising moves waiting in the final third. Young at Heart is more mature than its title lets on. 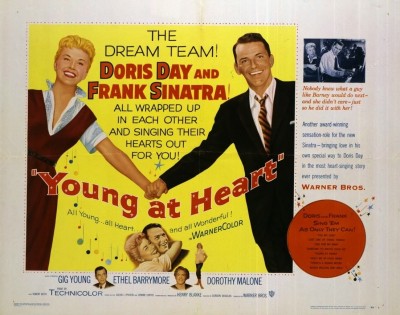